Richard DeCoatsworth, Former Cop, Once Hailed As Hero Now Faces Rape Charges. PHILADELPHIA -- A former Philadelphia police officer once hailed as a hero and given a seat next to the first lady at a speech by President Obama has been arrested and charged with rape and other crimes. 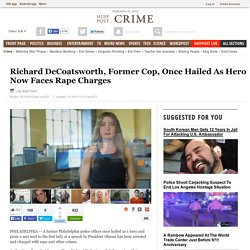 Authorities allege that former officer Richard DeCoatsworth left a party with two females early Thursday and took them to another location, where they allege that he produced a handgun and "forced the two females to engage in the use of narcotics and sexual acts. " A police spokeswoman said the two called police after he left, and 27-year-old DeCoatsworth was later arrested. According to court records, DeCoatsworth was arraigned Saturday night on charges including rape, involuntary deviate sexual intercourse, trafficking of persons, false imprisonment and aggravated assault. His bail was set at $60 million. DeCoatsworth was invited by Vice President Joe Biden to attend the president's televised February 2009 address to Congress and sat with first lady Michelle Obama. Jason Servo: Police Force Can't Fire Me Just Because I'm An Alcoholic. PORTLAND, Ore. — A police officer fired for driving drunk in an unmarked police car while off-duty has filed a $6 million lawsuit against the city of Gresham, the police chief and others, alleging his rights were violated under the Americans with Disabilities Act. 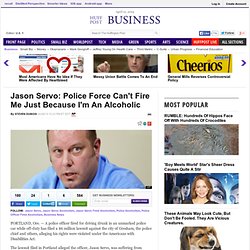 The lawsuit filed in Portland alleged the officer, Jason Servo, was suffering from alcoholism, a recognized disability under the act, and shouldn't have been dismissed. The suit also alleged Servo was denied due process, and the police union failed to represent him adequately. "Just as with any type of disability or disease, they should have made some kind of effort to accommodate that, or some kind of effort to work with him, and not simply sever all ties," said Shawn Kollie, one of Servo's attorneys.

Police Chief Craig Junginger was out of the office Friday. City spokeswoman Laura Shepard said officials would not discuss the case because their policy is to not talk about pending litigation. State outlines reasons Capitol Police officials fired. Raleigh, N.C. — Two State Capitol Police officials were fired two months ago after an internal investigation showed they allowed officers to use state patrol cars for off-duty security work and squirreled away fees charged for the work for their own benefit, according to documents released Wednesday. 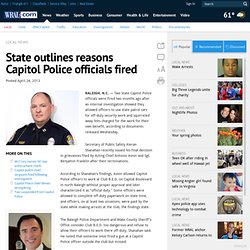 Secretary of Public Safety Kieran Shanahan recently issued his final decision in grievances filed by Acting Chief Antonio Asion and Sgt. Benjamin Franklin after their terminations. According to Shanahan's findings, Asion allowed Capitol Police officers to work at Club B.E.D. on Capital Boulevard in north Raleigh without proper approval and later characterized it as "official duty. " State Trooper Fired In Food Stamp Fraud Case. Florida Trooper Fired After Pistol-Whipping Teen, Police Say. Oklahoma Highway Patrol Trooper Fired. State Trooper Fired in Speeding Incident. COLUMBIA, S.C. — A state trooper was captured on his own car's video camera and fired for yanking a speeding suspect out of her car, throwing her to the ground, cursing her and threatening to cut off her clothes. 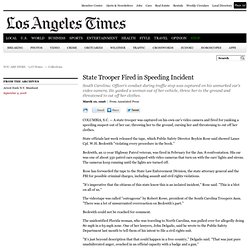 State officials last week released the tape, which Public Safety Director Boykin Rose said showed Lance Cpl. W.H. Beckwith "violating every procedure in the book. " Beckwith, an 11-year Highway Patrol veteran, was fired in February for the Jan. 8 confrontation. His car was one of about 350 patrol cars equipped with video cameras that turn on with the cars' lights and sirens. Rose has forwarded the tape to the State Law Enforcement Division, the state attorney general and the FBI for possible criminal charges, including assault and civil rights violations. "It's imperative that the citizens of this state know this is an isolated incident," Rose said. The videotape was called "outrageous" by Robert Rowe, president of the South Carolina Troopers Assn. Ex-Nebraska Trooper Fired for KKK Ties Wants Job Back. LINCOLN, Neb. – Attorneys for a former state trooper who joined a group affiliated with the Ku Klux Klan argued Tuesday before the state Supreme Court that he was wrongly fired by the state. 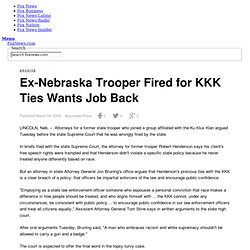 In briefs filed with the state Supreme Court, the attorney for former trooper Robert Henderson says his client's free speech rights were trampled and that Henderson didn't violate a specific state policy because he never treated anyone differently based on race. But an attorney in state Attorney General Jon Bruning's office argues that Henderson's previous ties with the KKK is a clear breach of a policy: that officers be impartial enforcers of the law and encourage public confidence. State Trooper Fired For Using Ebonics In Reports. Pittsburg, PA – An African-American state trooper was reportedly fired for using Ebonics in his police reports, according to The Associated Press. 29-year-old William Peake explained that he was fired at the end of his 18-month probationary period because he didn’t correctly fill out his reports. 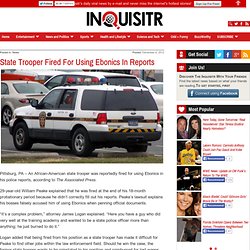 Peake’s lawsuit explains his bosses falsely accused him of using Ebonics when penning official documents. “It’s a complex problem,” attorney James Logan explained. “Here you have a guy who did very well at the training academy and wanted to be a state police officer more than anything; he just burned to do it.” Logan added that being fired from his position as a state trooper has made it difficult for Peake to find other jobs within the law enforcement field. According to the Times Online, the federal lawsuit states that Peake was treated more harshly than his co-workers due to his race. Miami-officer-pulled-over-for. BY JULIE K. 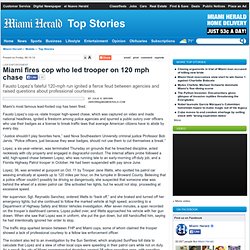 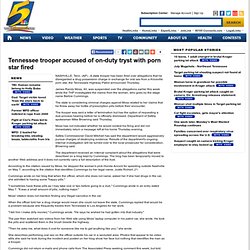 The trooper was sent a letter of termination but has the option of requesting a due-process hearing before he is officially dismissed, Department of Safety spokesman Mike Browning said Thursday. Moss has not indicated whether he would contest his firing and did not immediately return a message left at his home Thursday evening. Safety Commissioner David Mitchell has said the department would aggressively pursue charges of destroying evidence. Trooper Fired For Alleged Prostitution Parties - WBEN NewsRadio 930 : Buffalo & Niagara Falls, NY. Trooper Fired In Sex Case Trying To Get His Job Back. A Washington State Patrol Trooper fired over alleged sexual misconduct, including accusations that he sexually assaulted a woman he pulled over for speeding, wants his job back. 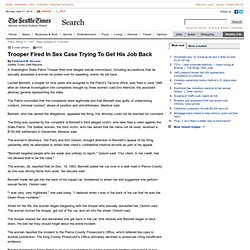 Lonnell Bennett, a trooper for nine years and assigned to the Patrol's Tacoma office, was fired in June 1995 after an internal investigation into complaints brought by three women, said Eric Mentzer, the assistant attorney general representing the state. The Patrol concluded that the complaints were legitimate and that Bennett was guilty of unbecoming conduct, immoral conduct, abuse of position and untruthfulness, Mentzer said. Bennett, who has denied the allegations, appealed the firing. His attorney could not be reached for comment. The firing was spurred by the complaint of Bennett's third alleged victim, who later filed a claim against the State Patrol.

Trooper fired from chopper to stop truck, kills 2. LA JOYA, Texas (AP) — A Texas state trooper who fired on a pickup truck from a helicopter and killed two illegal immigrants during a chase through the desert was trying to disable the vehicle and suspected it was being used to smuggle drugs, authorities said Friday. 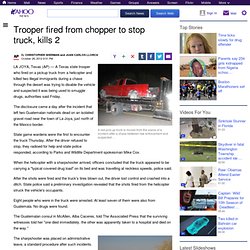 The disclosure came a day after the incident that left two Guatemalan nationals dead on an isolated gravel road near the town of La Joya, just north of the Mexico border. State game wardens were the first to encounter the truck Thursday. After the driver refused to stop, they radioed for help and state police responded, according to Parks and Wildlife Department spokesman Mike Cox. Accused in kidnap, trooper fired. December 23, 2008|By Gus G. Sentementes | Gus G. Sentementes,gus.sentementes@baltsun.com. Lawsuit Accuses Fired Utah Trooper of Falsifying D.U.I. Arrests. Passionate about police work, with a wide smile and a notable number of driving-under-the-influence arrests to show for her diligence, Corporal Steed was named trooper of the year by her superiors in 2007, her career seemingly heading toward the inevitable promotions.

In November, however, the once promising officer was fired amid a haze of misconduct allegations. Though the Highway Patrol would not discuss Ms. Two Texas state troopers indicted for roles in roadside body cavity search of two women. Dallasnews.com A still from the traffic stop. One of the women can be heard in the video saying, 'I was like totally violated over there a few minutes ago.