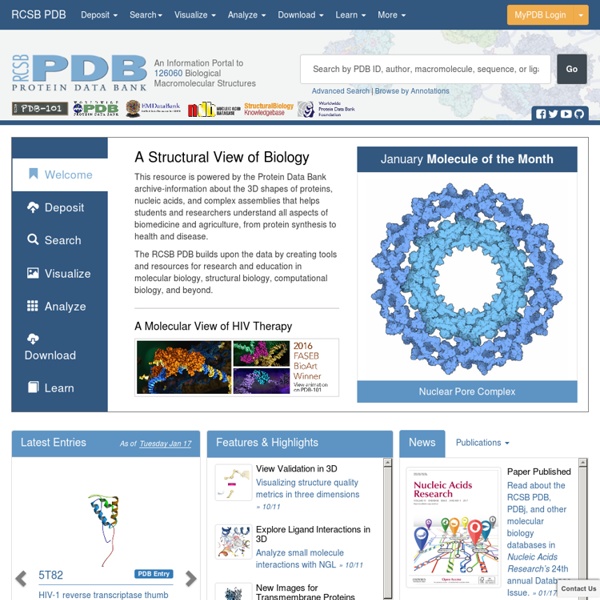 A Structural View of Biology This resource is powered by the Protein Data Bank archive-information about the 3D shapes of proteins, nucleic acids, and complex assemblies that helps students and researchers understand all aspects of biomedicine and agriculture, from protein synthesis to health and disease. As a member of the wwPDB, the RCSB PDB curates and annotates PDB data. The RCSB PDB builds upon the data by creating tools and resources for research and education in molecular biology, structural biology, computational biology, and beyond. Use this website to access curated and integrated biological macromolecular information in the context of function, biological processes, evolution, pathways, and disease states. A Molecular View of HIV Therapy January Molecule of the Month Nuclear Pore Complex Deposition Preparation Tools Data Extraction Small Molecules Ligand Expo: Search the Chemical Component Dictionary for the IDs of released ligands Data Format Conversion 3D Structure Viewers

Fatty Acids Types of fatty acids[edit] Three-dimensional representations of several fatty acids Fatty acids that have carbon–carbon double bonds are known as unsaturated. IMP Bioinformatics Group The IMP-IMBA Bioinformatics group was established in August 2007 in recognition of the growing importance of computational biology in biomedical research. We offer inter-disciplinary expertise in biocomputing and information technology. Special thanks to the for their cooperation. Sequence Analysis A major aspect of our work is the functional and structural characterization of biological sequences in close cooperation with experimental partners. 10 Incredible Chemical Reaction GIFs Explained We encounter thousands of chemical reactions every day: plants use them in photosynthesis, metals rust over time, and combustion reactions provide us with heat and light, among thousands of other daily uses. Chemical reactions occur when reactants transform into new substances, called products, through creating and breaking bonds between atoms. Sometimes the process creates some pretty wild effects.

PyMOL - Wiki Non-free binaries[edit] On 1 August 2006, DeLano Scientific adopted a controlled-access download system for pre-compiled PyMOL builds (including betas) distributed by the company. Access to these executables is now limited to paying customers but is free for students and teachers. However, the current source code continues to be available at no cost, as are older pre-compiled builds. Genomes Pages The first completed genomes from viruses, phages and organelles were deposited into the EMBL Database in the early 1980's. Since then, molecular biology's shift to obtain the complete sequences of as many genomes as possible combined with major developments in sequencing technology resulted in hundreds of complete genome sequences being added to the database, including Archaea, Bacteria and Eukaryota. These web pages give access to a large number of complete genomes, help is available to describe the layout. Whole Genome Shotgun Sequences (WGS)

Reconstruction of Ancestral Metabolic Enzymes Reveals Molecular Mechanisms Underlying Evolutionary Innovation through Gene Duplication Abstract Gene duplications are believed to facilitate evolutionary innovation. However, the mechanisms shaping the fate of duplicated genes remain heavily debated because the molecular processes and evolutionary forces involved are difficult to reconstruct. Here, we study a large family of fungal glucosidase genes that underwent several duplication events. We reconstruct all key ancestral enzymes and show that the very first preduplication enzyme was primarily active on maltose-like substrates, with trace activity for isomaltose-like sugars. Structural analysis and activity measurements on resurrected and present-day enzymes suggest that both activities cannot be fully optimized in a single enzyme.

Anatomy of Gene Regulation: A Three-Dimensional Structural Analysis Panagiotis A. Tsonis. Cambridge University Press, Cambridge, U.K. 2003. 282 pp. $50.00. Structural biology has revolutionized the way biological questions are approached and the detail with which cellular phenomena are understood. The DNA double helix, the first structure of a biological molecule, was determined by X-ray crystallography in 1953. Evolution of Mammalian Diving Capacity Traced by Myoglobin Net Surface Charge Extended breath-hold endurance enables the exploitation of the aquatic niche by numerous mammalian lineages and is accomplished by elevated body oxygen stores and adaptations that promote their economical use. However, little is known regarding the molecular and evolutionary underpinnings of the high muscle myoglobin concentration phenotype of divers. We used ancestral sequence reconstruction to trace the evolution of this oxygen-storing protein across a 130-species mammalian phylogeny and reveal an adaptive molecular signature of elevated myoglobin net surface charge in diving species that is mechanistically linked with maximal myoglobin concentration. This observation provides insights into the tempo and routes to enhanced dive capacity evolution within the ancestors of each major mammalian aquatic lineage and infers amphibious ancestries of echidnas, moles, hyraxes, and elephants, offering a fresh perspective on the evolution of this iconic respiratory pigment.

G03 Manual: POPULATION This properties keyword controls printing of molecular orbitals and several types of population analysis and atomic charge assignments. The default is to print just the total atomic charges and orbital energies, except for Guess=Only jobs, for which the default is Pop=Full (see below). Populations are done once for single-point calculations and at the first and last points of geometry optimizations. The density that is used for the population analysis is controlled by the Density keyword. Note that only one density and method of charge fitting can be used in a job step. If several combinations are of interest, additional jobs steps can be added which specify Guess=Only Density=Check, to avoid repeating any costly calculations.

Cystic Fibrosis - Gene Mutations and CFTR protein Located on human chromosome 7, the CFTR gene is made up of 250,000 DNA nucleotides. CFTR stands for Cystic Fibrosis Transmembrane Conductance Regulator. The CFTR protein functions as a channel for the movement of chloride ions in and out of cells, which is important for the salt and water balance on epithelial surfaces, such as in the lungs or pancreas.