How Giving Up Meat For A Month Improved My Productivity. Food occupies so much of my mental space. 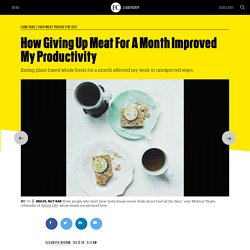 World's largest factory for animal cloning to be built in Tianjin, China. The world's biggest animal cloning factory is under construction in China, with plans to mass-produce pet and police dogs, racing horses and a million beef cattle annually by 2020. 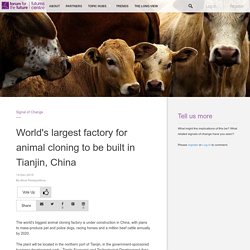 The plant will be located in the northern port of Tianjin, in the government-sponsored business development park - Tianjin Economic and Technological Development Area (TEDA), and is due to be completed by June next year. The 200 million yuan (£20.5 million) facility — backed by biotechnology company BoyaLife, the Tianjin International Joint Academy of Biomedicine, Peking University's Institute of Molecular Medicine, and South Korea's Sooam Biotech — will set up a cloning lab, a gene bank and a science education centre. Sinica, Peking University's Institute of Molecular Medicine signed the agreement with the TEDA on 20 November 2015.

Antibiotic use in food fuels resistance to vital drugs – report. The use of antibiotics in agriculture is fuelling drug resistance and must be cut back or even banned where they are important for humans, a report commissioned by David Cameron has warned. 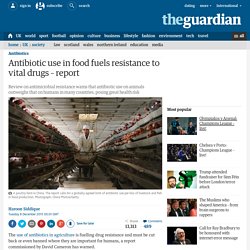 The Review on Antimicrobial Resistance said global use of antimicrobials in food production at least matched that by humans, extending even to the widespread application in some areas of “last resort” antibiotics for humans – which cannot be replaced when ineffective – to animals. Just as rising levels of human use of antibiotics are leading to growing resistance, the same is happening in agriculture, the review said in its latest paper, published on Tuesday. It acknowledges that the proper use of antibiotics is essential for treating infections in animals, as in humans, and offers considerable benefits for food production.

The protein problem: why eating too much chicken might not help your diet. When it comes to diet, many health-conscious consumers have come to the conclusion that protein is king. 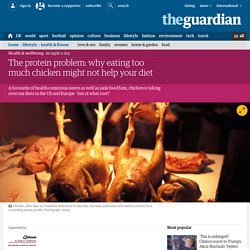 Specifically: chicken. Diet trends, such as the recently debunked Paleo diet, have overstated the importance of eating a lot of meat. At the same time, consumers have been put off red meat by its associated health and environmental concerns. This has led to consumers increasingly eating more chicken instead. The global appetite for chicken is growing so large that health and environmental experts say we’re creating an excess protein problem, with damaging consequences for our planet and no additional health benefits for us.

Quinoa isn’t new but its protein could soon be novel. Although often vaunted as an excellent source of vegetable protein, quinoa actually lags behind soy or whole milk powder and fares better against other grains such as rice, according to new product developer Laurie Scanlin. 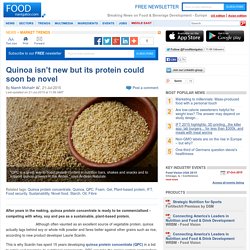 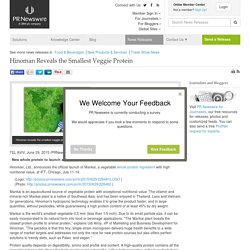 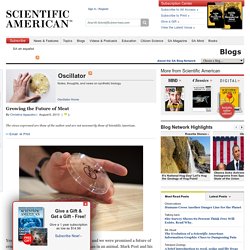 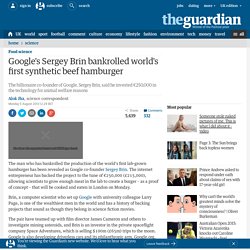 The internet entrepreneur has backed the project to the tune of €250,000 (£215,000), allowing scientists to grow enough meat in the lab to create a burger – as a proof of concept – that will be cooked and eaten in London on Monday. Brin, a computer scientist who set up Google with university colleague Larry Page, is one of the wealthiest men in the world and has a history of backing projects that sound as though they belong in science fiction movies. The pair have teamed up with film director James Cameron and others to investigate mining asteroids, and Brin is an investor in the private spaceflight company Space Adventures, which is selling $100m (£65m) trips to the moon. Google is also developing driverless cars and its philanthropic arm, Google.org, has invested in green energy projects.

Changing diets: Plant protein sustainability crucial for food security. While meat consumption is on the rise in much of the developing world, it is beginning to fall in developed economies. 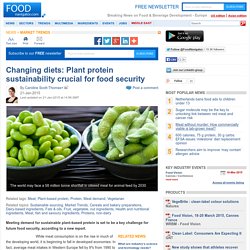 In fact, average meat intakes in Western Europe fell by 9% from 1990 to 2009, FAOSTAT figures show. Do We Need A New 'Environmental Impact' Label For Beef? Researchers say there's plenty the beef industry can do to use less land and water and emit fewer greenhouse gas emissions. 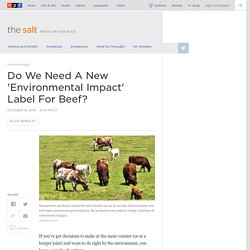 Congress now has slapped them down. Lawmakers attached a list of "congressional directives" to a massive spending bill that was passed by both the House and the Senate in recent days. One of those directives expresses "concern" that the Dietary Guidelines Advisory Committee "is showing an interest in incorporating agriculture production practices and environmental factors" into their recommendations, and directs the Obama administration to ignore such factors in the next revision of the guidelines, which is due out next year.

The directive is not legally binding, but ignoring it would provoke yet another political battle between the Obama administration and Congress. Breeding flies and edible plastic: the kitchen of the future. The kitchen of the future will be full of cutlery that cleans itself, Willy Wonka-style food pills and edible packaging, according to forecasting agency Trendstop. It also predicts that by 2063, fresh, organic produce will be in high demand and we’ll be turning our backs on supermarkets to go hyperlocal and grow our own food. So what are the future-thinking innovations that might influence how we produce food and what we do with our waste? Food from flies Katharina Unger, founder of Austrian collaborative design studio Livin, is one of a number of designers and startups who want to see the kitchen become more symbiotic with food production. Swine in China: Empire of the pig. I Used to Be a Snob About Fake Meat. I Was Dead Wrong. Luxembourg prohibits sale of edible insects. Insects for human consumption in Europe are covered under novel food regulation, which requires foods that were not habitually consumed in the EU prior to 1997 to undergo a thorough risk assessment before they can be commercialised.

Hop On the Kangaroo Meat Bandwagon. Eating insects won't take off in the west. Insects are unlikely to become a viable solution to feeding the increasing global population if western attitudes towards them remain negative, according to a leading analyst. A decline in meat supply and a rise in demand for it would spur food businesses to look for alternative proteins, as the global population reached a predicted 9bn by 2050, said Media Eghbal, head of countries’ analysis at Euromonitor International. Environmental indicator report 2014. Nitrous oxide emissions could double by 2050, study finds. 28 Oct 2014, 17:42Robert McSweeney Emissions of nitrous oxide could double by the middle of the century if left unchecked, a new study finds. And nitrous oxide is the third biggest contributor to manmade climate warming.