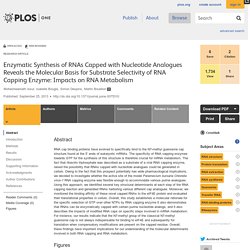 The specificity of RNA capping enzymes towards GTP for the synthesis of this structure is therefore crucial for mRNA metabolism. The fact that ribavirin triphosphate was described as a substrate of a viral RNA capping enzyme, raised the possibility that RNAs capped with nucleotide analogues could be generated in cellulo. Owing to the fact that this prospect potentially has wide pharmacological implications, we decided to investigate whether the active site of the model Paramecium bursaria Chlorella virus-1 RNA capping enzyme was flexible enough to accommodate various purine analogues. Using this approach, we identified several key structural determinants at each step of the RNA capping reaction and generated RNAs harboring various different cap analogues. Editor: André Paul Gerber, University of Surrey, United Kingdom Introduction Methods. 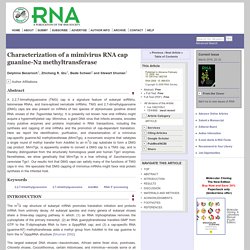 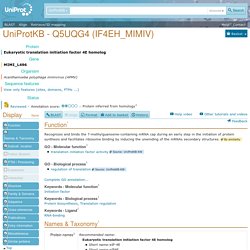 <p>Provides any useful information about the protein, mostly biological knowledge. </p><p><a href='.. /manual/function_section' target='_top'>More... </a></p>Functioni Recognizes and binds the 7-methylguanosine-containing mRNA cap during an early step in the initiation of protein synthesis and facilitates ribosome binding by inducing the unwinding of the mRNAs secondary structures. 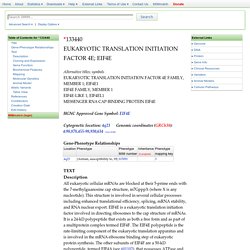 Jones et al. (1997) stated that EIF4E is the rate-limiting component in protein synthesis and may play a role in growth regulation. The overexpression of EIF4E can cause malignant transformation. Waskiewicz et al. (1997) identified EIF4E as a potential physiologic substrate for Mnk1 (MKNK1; 606724) and Mnk2 (MKNK2; 605069) in mouse. Using coimmunoprecipitation experiments, Pyronnet et al. (1999) demonstrated that MNK1 interacts with the EIF4F complex via its interaction with the C-terminal region of EIF4G, not through a direct interaction with EIF4E. An EIF4E mutant lacking EIF4G-binding capability was poorly phosphorylated in cells. In mammals, MTOR (601231) cooperates with PI3K (see 171834)-dependent effectors in a biochemical signaling pathway to regulate the size of proliferating cells. 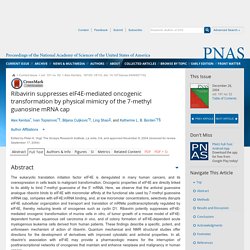 Vogt, The Scripps Research Institute, La Jolla, CA, and approved November 8, 2004 (received for review September 17, 2004) Abstract The eukaryotic translation initiation factor eIF4E is deregulated in many human cancers, and its overexpression in cells leads to malignant transformation. Oncogenic properties of eIF4E are directly linked to its ability to bind 7-methyl guanosine of the 5′ mRNA. Whereas the precise causes of neoplasia and malignancy are known only for a few human cancers, deregulated tumor suppressors and oncogenes that maintain and enhance the malignant phenotype are becoming relatively well described (1, 2). eIF4E is overexpressed in a wide variety of malignant cell lines and primary human tumors such as carcinomas of the breast (5), colon (6), and head and neck (7), non-Hodgkin's lymphomas (8), and chronic and acute M4/M5 myelogenous leukemias (9). 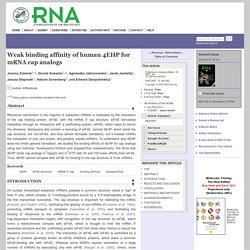 Abstract Ribosome recruitment to the majority of eukaryotic mRNAs is facilitated by the interaction of the cap binding protein, eIF4E, with the mRNA 5′ cap structure. eIF4E stimulates translation through its interaction with a scaffolding protein, eIF4G, which helps to recruit the ribosome. Metazoans also contain a homolog of eIF4E, termed 4EHP, which binds the cap structure, but not eIF4G, and thus cannot stimulate translation, but it instead inhibits the translation of only one known, and possibly subset mRNAs. To understand why 4EHP does not inhibit general translation, we studied the binding affinity of 4EHP for cap analogs using two methods: fluorescence titration and stopped-flow measurements.

All nuclear transcribed eukaryotic mRNAs possess a common structure called a “cap” at their 5′ end, which consists of 7-methylguanosine bound by a 5′-5′-triphosphate bridge to the first transcribed nucleotide. Footnotes.