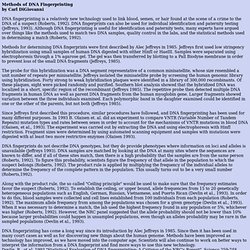 DNA fingerprints can also be used for individual identification and paternity testing (Jeffreys, 1993). Although DNA fingerprinting is useful for identification and paternity tests, many experts have argued over things like the methods used to match two DNA samples, quality control in the labs, and the statistical methods used in determining a match (Roberts, 1992). Nature_article.pdf (application/pdf Object) DNA Fingerprinting. DNA fingerprinting has established itself as an efficient and highly accurate means of determining identities and relationships. 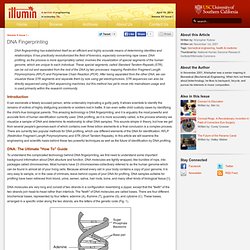 It has practically revolutionized the field of forensics, especially concerning rape cases. DNA profiling, as the process is more appropriately called, involves the visualization of special segments of the human genome, which are unique to each individual. These special segments, called Standard Tandem Repeats (STR), can be cut out and separated from the rest of the DNA by two processes: mapping Restriction Fragment Length Polymorphisms (RFLP) and Polymerase Chain Reaction (PCR).

After being separated from the other DNA, we can visualize these STR segments and separate them by size using gel electrophoresis. Serial Killer Claims DNA Testing Is Flawed – Appeal Denied. Convicted serial killer, Timothy Spencer, the Southside Strangler, appealed his death sentence. 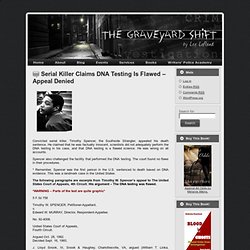 He claimed that he was factually innocent, scientists did not adequately perform the DNA testing in his case, and that DNA testing is a flawed science. He was wrong on all accounts. Spencer also challenged the facility that performed the DNA testing. The court found no flaws in their procedures. * Remember, Spencer was the first person in the U.S. sentenced to death based on DNA evidence. The following paragraphs are excerpts from Timothy W. *WARNING – Parts of the text are quite graphic* 5 F.3d 758. WHO DONE IT? Liz Fulton, Carol Alderman, Carol Sanders 1993 Woodrow Wilson Biology Institute Concepts: Techniques involved in DNA analysis, blood typing, fingerprinting, skeletal anatomy, chromatography, soil and textile analysis, spectrophotometry Grades 6-12. 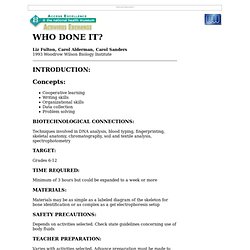 DNA Interactive: Discovering the DNA Structure and beyond. DNA profiling. DNA profiling (also called DNA testing, DNA typing, or genetic fingerprinting) is a technique employed by forensic scientists to assist in the identification of individuals by their respective DNA profiles. 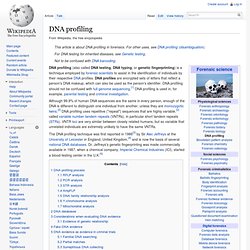 DNA profiles are encrypted sets of letters that reflect a person's DNA makeup, which can also be used as the person's identifier. DNA profiling should not be confused with full genome sequencing.[1] DNA profiling is used in, for example, parental testing and criminal investigation. The DNA profiling technique was first reported in 1986[3] by Sir Alec Jeffreys at the University of Leicester in England, United Kingdom,[4] and is now the basis of several national DNA databases.

Dr. Jeffreys's genetic fingerprinting was made commercially available in 1987, when a chemical company, Imperial Chemical Industries (ICI), started a blood-testing center in the U.K.[5] Create a DNA Fingerprint. In the last 15 years, DNA has played an increasingly important role in our legal system. 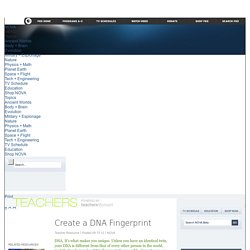 Tissue evidence is now routinely collected during criminal investigations in hopes that it will provide genetic clues linking suspected criminals to crimes. DNA profiles help forensic investigators determine whether two tissue samples -- one from the crime scene and one from a suspect -- came from the same individual. Fortunately, the genetic comparison doesn't require that investigators look at all of the DNA found in the tissue samples. That would take months or even years. Instead, by marking a small number of segments of DNA in one sample and then checking for the presence or absence of those segments in the other sample, investigators can say with some assurance whether the samples are from the same person. 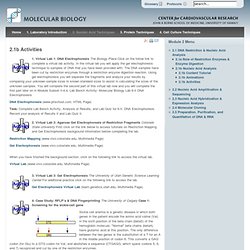 Virtual Lab 1: DNA Electrophoresis The Biology Place Click on the follow link to complete a virtual lab activity. In the virtual lab you will apply the gel electrophoresis technique to samples of DNA that you have been provided with. The DNA samples have been cut by restriction enzymes through a restriction enzyme digestion reaction. Using gel electrophoresis you will separate the fragments and analyze your results by comparing your unknown sample sizes to known standard sizes to assist in calculating the sizes of the unknown samples. 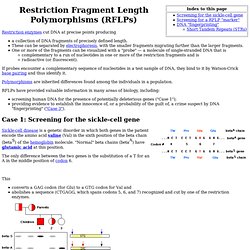 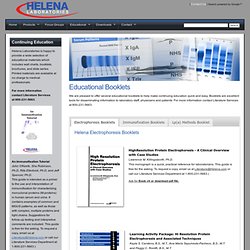 Killingsworth, Ph.D. This monograph is a quick, practical reference for laboratorians. This guide is free for the asking. To request a copy, email us at Literature@Helena.com or call our Literature Services Department at 1-800-231-5663.) Ask for Book J4 or download pdf file. Learning Activity Package: Hi Resolution Protein Electrophoresis and Associated Techniques Kayla S. Ask for Book V5 or download pdf file. The Theory of ElectrophoresisThis monograph is a quick, practical reference for laboratorians. Ask for Book 56. Interpretive Guide to Clinical Electrophoresis - Important Normal and Abnormal Patterns P.Fauchier, and F.