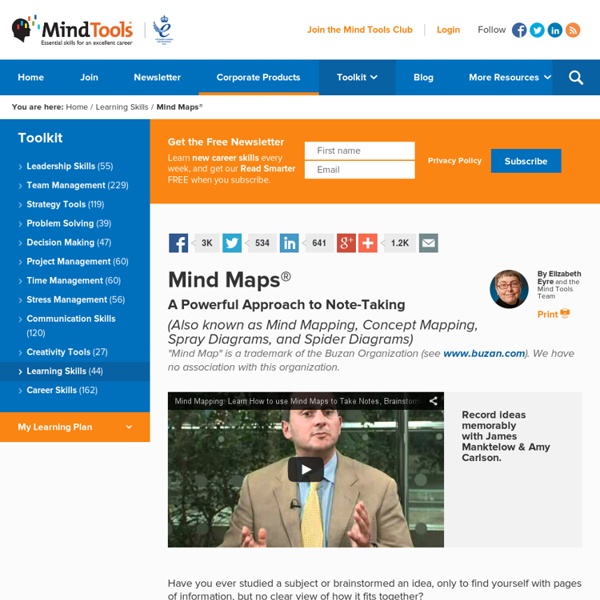 A Powerful Approach to Note-Taking (Also known as Mind Mapping, Concept Mapping, Spray Diagrams, and Spider Diagrams) "Mind Map" is a trademark of the Buzan Organization (see www.buzan.com). We have no association with this organization. Record ideas memorably with James Manktelow & Amy Carlson. Have you ever studied a subject or brainstormed an idea, only to find yourself with pages of information, but no clear view of how it fits together? This is where Mind Mapping can help you. Mind Mapping is a useful technique that helps you learn more effectively, improves the way that you record information, and supports and enhances creative problem solving. By using Mind Maps, you can quickly identify and understand the structure of a subject. More than this, Mind Maps help you remember information, as they hold it in a format that your mind finds easy to recall and quick to review. About Mind Maps Mind Maps were popularized by author and consultant, Tony Buzan. . Uses Mind Maps are useful for: 1. 2.

Macbeth l Historical Background l Elizabethan World Order Elizabethan World Order This theory, based on the Greek philosopher Aristotle’s concept of the universe, was of great importance to Shakespeare’s contemporaries and was used by him in developing events in his plays. According to this idea, everything in the world had its position fixed by God. The Earth was the centre of the universe and the stars moved around it in fixed routes.

How to Make a Mind Map® The 'Laws of Mind Mapping' were originally devised by Tony Buzan when he codified the use of imagery, colour and association and coined the phrase 'Mind Mapping'. In the intervening 30 plus years, there have been many variations on the original 'Mind Map ' and the widespread usage of mapping software of various sorts, has dramatically changed what is possible. >> Click here to go to a video that provides a rapid (99 second) overview of how to Mind Map. (Note that you will be asked for your e-mail address so that you can view the video free of charge). The summary below is based on Buzan's structure (a 'Mind Mapping, how to' - details available in his many books) but we believe that whilst this structure is great for establishing well structured maps that can be used in many different ways, variations on these rules or 'laws' are often sensible and appropriate - as long as they are based on an understanding of why the laws exist and what they are trying to help the mind mapper to achieve.

Maps Wikia Skip to ContentSkip to Wiki NavigationSkip to Site Navigation Maps Mindmup Capture ideas at the spead of thought – using a mind map maker designed to help you focus on your ideas and remove all the distractions while mindmapping. Create unlimited mind maps for free, and store them in the cloud. Your mind maps are available everywhere, instantly, from any device. Brainstorm, create presentations and document outlines with mind maps, and publish your ideas online and to social networks. Get Started

Scottish campaign aims to reveal the real Macbeth He was the Scottish king immortalised in one of William Shakespeare's plays as a murderous man driven by a lust for power which led him to guilt, madness and an ignominious death by beheading. Now a campaign in Scotland aims to rehabilitate the 11th-century ruler's tarnished image, arguing that Shakespeare fictionalised the Scot's reign and misrepresented the truth in the eponymous play. On Friday at Glamis Castle in Angus – an appropriate venue as Macbeth was afforded the title Thane of Glamis by Shakespeare – details of the Macbeth Trail will be unveiled in a bid to attract tourists to Scotland's north-east while educating the public about the country during the Middle Ages. The idea for the campaign followed the recent discovery of the remains of Richard III under a car park in Leicester. He added: "The reign of Macbeth, set in the context of the time, was successful and outward looking. To many, however, it is characterised by paranoia and murder because of Shakespeare's portrayal.

Mind map This article is about the diagram. For the geographical concept, see Mental mapping. Hand-drawn and computer-drawn variations of a mind map. A mind map is a diagram used to visually organize information. A mind map is often created around a single concept, drawn as an image in the center of a blank landscape page, to which associated representations of ideas such as images, words and parts of words are added. Major ideas are connected directly to the central concept, and other ideas branch out from those.

20 Good Map Creation Tools for Students A couple of years ago I published a list of 21 online map creation tools. Since then some of those tools have gone offline and new tools have replaced them. Here's my updated list of online map creation tools for students and teachers. Wikia Maps is a map creation tool from Wikia. Wikia Maps has two map creation options. Literature and Latte - Scapple for Mac OS X and Windows Rough It Out Scapple doesn’t force you to make connections, and it doesn’t expect you to start out with one central idea off of which everything else is branched. There’s no built-in hierarchy at all, in fact—in Scapple, every note is equal, so you can connect them however you like. Macbeth Biography Macbeth was king of Scotland during the 11th century. He was also the basis for Shakespeare's play Macbeth. Synopsis Macbeth took the throne after killing his cousin, King Duncan I, in battle in 1040. In 1046, Siward, earl of Northumbria, unsuccessfully attempted to dethrone Macbeth in favor of Malcolm.

CmapTools Construct, Navigate, Share and Criticize The IHMC CmapTools software empowers users to construct, navigate, share and criticize knowledge models represented as concept maps. It allows users to, among many other features, construct their Cmaps in their personal computer, share them on servers (CmapServers) anywhere on the Internet, link their Cmaps to other Cmaps on servers, automatically create web pages of their concept maps on servers, edit their maps synchronously (at the same time) with other users on the Internet, and search the web for information relevant to a concept map 10 Mind Mapping Strategies For Teachers 10 Mind Mapping Strategies For Teachers by Andrea Leyden, examtime.com The adoption of Mind Maps in teaching has grown recently due to the benefits of using Mind Maps to learn and the availability of free online mind mapping software. Teachers have recognized the value of using Mind Maps to engage students, encourage creativity and, most importantly, teaching how to learn rather simply memorizing content.

MacBeth MacFindlaech Considered by many historians as the last of the Gaelic kings of Scotland, MacBeth has become less of a historical figure and more a fictional character. At the hands of later chroniclers- mostly English- and ultimately by the pen of William Shakespeare, MacBeth changed into a despicable ruler, a far cry from the real person. MacBeth MacFindlaech was born in 1005 AD (1), the same year his grandfather (Malcolm II) became king. His father, Findlaech MacRuaridh, controlled the province of Moray as Mormaer (2). 5 for available in French NovaMind software are pleased to announce the immediate availability of NovaMind 5 in French. With this release, NovaMind 5 for Mac is now available in English, French, Spanish, and German, and NovaMind 5 for Windows is available in English, French, Spanish, Simplified Chinese, Traditional Chinese and German. The updated release is available immediately through the download link on the NovaMind web site, or through the normal update mechanism for customers who have purchased through the NovaMind online store (either Windows or Mac), and will be available for Mac App Store customers as soon as it has gone through the Apple approval procedures.