MACBETH AND THE TRAGIC HERO'S JOURNEY by Carolee Dean. Before I begin my discussion on tragic heroes, I want to let everyone know that I will be offering a FREE online writing workshop beginning June 14 based on The Secret Language of Stories. 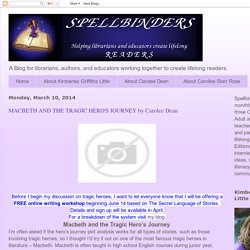 Details and sign up will be available in April. For a breakdown of the system visit my blog. Macbeth and the Tragic Hero’s Journey I’m often asked if the hero’s journey plot analysis works for all types of stories, such as those involving tragic heroes, so I thought I’d try it out on one of the most famous tragic heroes in literature – Macbeth. Macbeth is often taught in high school English courses during junior year, making it a pertinent story to analyze. SPELLBINDERS: MACBETH AND THE TRAGIC HERO'S JOURNEY by Carolee Dean. Teachers Shake Up Shakespeare with Digital Media. "My name is Macbeth / I'm the Thane of Glamis. / I might not be the king / but I'm still hella famous. 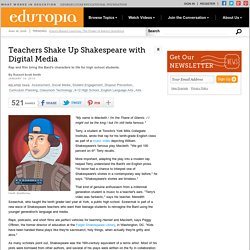 " Terry, a student at Toronto's York Mills Collegiate Institute, wrote that rap for his tenth-grade English class as part of a music video depicting William Shakespeare's famous play Macbeth. "We got 100 percent on it! " Terry recalls. More important, adapting the play into a modern rap helped Terry understand the Bard's old English prose. "I'd never had a chance to interpret one of Shakespeare's stories in a contemporary way before," he says.

That kind of genuine enthusiasm from a millennial generation student is music to a teacher's ears. Macbeth%20-%20SCOPE%20magazine_1.pdf. 6389135_orig.jpg (JPEG Image, 960 × 600 pixels) WritingWorks - Engaging students with classical literature. Some teachers feel that there is little value in teaching Shakespeare (and other classics) to 21stC students. 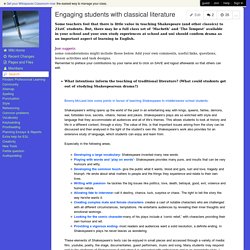 But, there may be a full class set of ‘Macbeth’ and ‘The Tempest’ available in your school and your own study experiences at school and uni should confirm drama as an important aspect of learning in English.Jean suggests:some considerations might include those below. Add your own comments, useful links, questions, lesson activities and task designs. Remember to preface your contributions by your name and to click on SAVE and logout afterwards so that others can edit.What intentions inform the teaching of traditional literature?

(What could students get out of studying Shakespearean drama?) Bronny.McLeod lists some points in favour of teaching Shakespeare to middle/senior school students: Shakespeare’s writing opens up the world of the past in an entertaining way with kings, queens, fairies, demons, war, forbidden love, secrets, villains, heroes and jokers. Macbeth_final_project_options.pdf. Shakespearesmacbethstudyguide. TumbleReaders_Macbeth.pdf. Shaking the Shakespeare Blues. Best Shakespeare Sites Absolute Shakespeare offers summaries overviews, some criticism, and text of the plays. 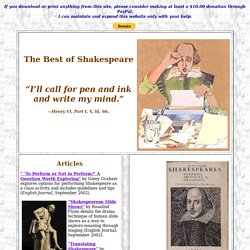 Focus is on the more frequently taught plays. BBC In Search of Shakespeare traces Shakespeare’s life in two parts. Early Years and Later Years (archived). Cummings Shakespeare Guides offer a varied mix of information written just for the site and links to scholarly resources. Macbeth_guide.pdf. Modern Macbeth. Differentiation in Practice: A Resource Guide for Differentiating Curriculum ... - Carol A. Tomlinson, Cindy A. Strickland. Macbeth R.A.F.T. Assignment by Jessica Cornell on Prezi. RAFT examples for examination.pdf. iTeach. iCoach. iBlog.: Introducing Macbeth: Common Core-Style. Which of the following do you believe is the most creative interpretation for the opening scene from Shakespeare's The Tragedy of Macbeth? 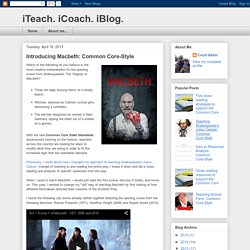 Three old hags burying items on a lonely beach.Witches, dressed as Catholic school girls, destroying a cemetery.The witches disguised as nurses in Nazi Germany ripping the heart out of a soldier on a gurney. With the new Common Core State Standards assessment looming on the horizon, teachers across the country are looking for ways to modify what they are doing in order to fit the increased rigor that the standards demand. Previously, I wrote about how I changed my approach to teaching Shakespeare's Julius Caesar. Instead of listening to and reading the entire play, I broke it down and did a close reading and analysis of specific speeches from the play.When I used to teach Macbeth, I would just read the first scene, discuss it briefly, and move on. 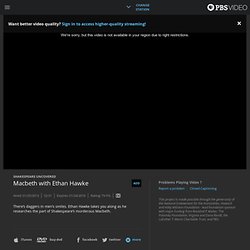 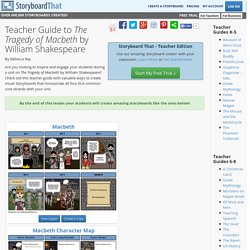 Check out this teacher guide with valuable ways to create visual Storyboards that incorporate all four ELA common core strands with your unit. By the end of this lesson your students will create amazing storyboards like the ones below! A Quick Plot Spoiler of The Tragedy of Macbeth. Macbeth: pre- reading task linked to pictures. Macbeth. Macbeth Lesson Plans. Macbeth, the Tragic Hero - Mr. B's Grade 10 Macbeth Site. Macbeth-prereading-questions.pdf. Macbeth-pre-reading-activities.pdf. Teaching Shakespeare With The New York Times. Updated: April, 2014 If you’re always looking for creative ways to refresh your teaching of Shakespeare and help students make connections between the Bard’s works and the world, this collection can help. 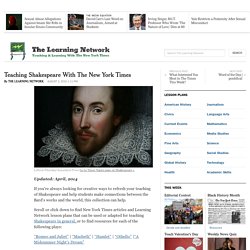 Scroll or click down to find New York Times articles and Learning Network lesson plans that can be used or adapted for teaching Shakespeare in general, or to find resources for each of the following plays: “Romeo and Juliet” | “Macbeth” | “Hamlet” | “Othello” |“A Midsummer Night’s Dream” We have also just published a special post that pulls ideas from the resources below: Celebrate Shakespeare on His 450th Birthday: Seven Ideas for Teaching and Learning. For more on teaching other classic literary titles and authors with The Times, scroll through this collection. General Resources Video Lesson Plans and More: Times Topics: Selected Articles and Multimedia: Photo Romeo and Juliet. Creative Teaching Strategies: Macbeth. Looking for some fun teaching resources and tips for Macbeth? 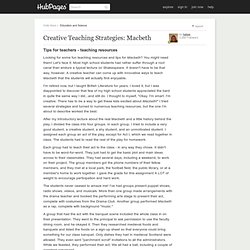 You might need them! Let's face it: Most high school students had rather suffer through a root canal than endure a typical lecture on Shakespeare. It doesn't have to be that way, however. A creative teacher can come up with innovative ways to teach Macbeth that the students will actually find enjoyable.

I'm retired now, but I taught British Literature for years. After my introductory lecture about the real Macbeth and a little history behind the play, I divided the class into four groups. Each group had to teach their act to the class - in any way they chose. The students never ceased to amaze me! A group that had the act with the banquet scene included the whole class in on their presentation. Macbeth on Pinterest. YouTube - Act 1 Scene 1 Of Macbeth - 1971 2006 And 2010. 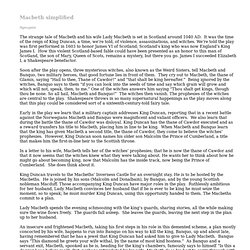 It was the time of the reign of King Duncan, a time, we’re told, of violence, assassinations, and witches. We’re told the play was first performed in 1603 to honor James VI of Scotland; Scotland’s king who was now England’s King James I. How this violent Scotland-based fable could have been presented as an honor to this man of Scotland, the son of Mary, Queen of Scots, remains a mystery, but there you go. Soon after the play opens, three mysterious witches, also known as the Weird Sisters, tell Macbeth and Banquo, two military heroes, that good fortune lies in front of them. Early in the play we learn that a military captain addresses King Duncan, reporting that in a recent battle against the Norwegians Macbeth and Banquo were magnificent and valiant officers. King Duncan travels to the Macbeths’ Inverness Castle for an overnight stay.

Www.shakespeareintheruins.com/wp-content/uploads/2011/09/Shakespeare-In-The-Ruins-presents-STRIPPED-DOWN-MACBETH_Study-Guide.pdf. S-eltmedia.heinle.com/resource_uploads/downloads/1424028701_34921.pdf. Pmwiki.php?n=Novels. Help - Macbeth's Banquet Scene - Fun activities - English. We do it this way to introduce it: I wrote out the scene events in a series of actable bullet points. (I can send this to you if you would like) They are in groups of 5 : Macbeth, Lady Macbeth, Murderer, Lennox, Ghost Each group of five has a table and 4 chairs. Dlc.k12.ar.us/Resources/Language_Arts/English/Novels_ShortStories/ActII_study_sheet.pdf. Enjoying "Macbeth" by William Shakespeare. Enjoying "Macbeth", by William Shakespeare by Ed Friedlander, M.D.erf@kcumb.edu This Is NOT "Family Entertainment. " Young people who know of Shakespeare from "Shakespeare Gardens" and "Beautiful Tales for Children" may be surprised by what happens in Macbeth.

Macbeth ~ Educator's Guide. Resource Pack: Macbeth. William Shakespeare's Macbeth is a choice as a Single Text, as well as the comparative course for L.C. 2014. Below are some online resources that may be helpful for teachers and pupils alike in the study of The Scottish Play. The list will be added to over the coming weeks and months so don't hesitate to get in touch if you find some helpful resources. This is a brief introduction to the play adapted from SkyMinds.net ''Shakespeare decided to show the steps by which a noble man is made to his damnation, to depict a man lured by evil. Www.Macbeth. November 2001 Jeremy Ehrlich, Folger Shakespeare Library. Heather Bouley, student, West Springfield High School, Springfield, VA. Plays/Scenes CoveredMacbeth What's On for Today and Why Students will use online resources in order to examine patterns of imagery in Macbeth. By comparing these patterns to those of other Shakespeare plays, the students will draw conclusions about the different reasons Shakespeare uses imagery in the play.

Moorpark High School - English 4CP Files. AmyMacbethSheet. Amy Leskow Name____________________________________________ period___________ Teaching Macbeth. Elementary Shakespeare. Shakespeare is for everybody—and that includes elementary school students! Many performance-based teaching strategies work very successfully with younger students, getting them up on their feet and interacting with the text cognitively, physically, and vocally. For ideas to use in your classroom, check out our webinar on teaching Shakespeare in elementary and middle school s, lesson plans for primary level students, teacher to teacher videos, and an NPR feature on second grade students reading Macbeth. Macbeth Lesson Plans. LydiaMacbeth.htm. How you will be marked: For all work, I will be looking for a rough copy, edited your good copy for grammar, spelling and content and neatness.

Peer editing is recommended. Next week, you will each have a short interview with me, marked out of 10, in which you will tell me about what you ahve learned from your C layer activities. This will be marked according to the Interview Mark Sheet and count toward the 60 points you will earn for this layer. GCSE Bitesize - Macbeth.