How the Flipped Classroom Is Radically Transforming Learning 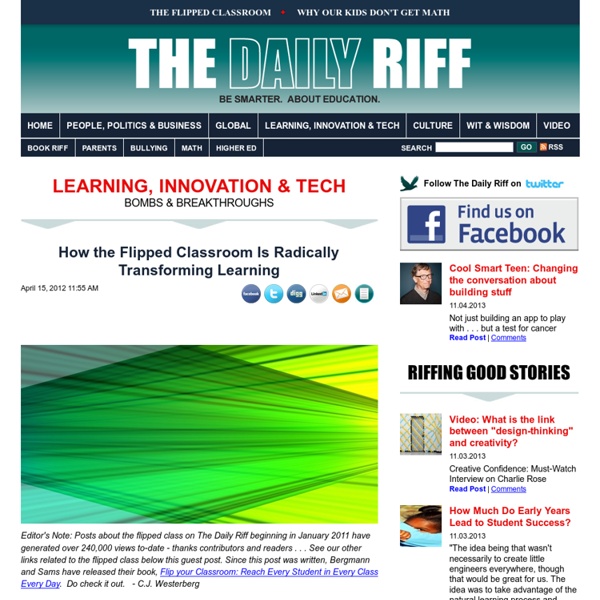 Editor's Note:Posts about the flipped class on The Daily Riff beginning in January 2011 have generated over 240,000 views to-date - thanks contributors and readers . . . See our other links related to the flipped class below this guest post. Since this post was written, Bergmann and Sams have released their book, Flip your Classroom: Reach Every Student in Every Class Every Day. Do check it out. - C.J. Westerberg How the Flipped Classroom was Born by Jonathan Bergmann and Aaron Sams In 2004, we both started teaching at Woodland Park High School in Woodland Park, Colorado. "And how the Flipped Classroom changes the way teachers talk with parents And then one day our world changed. Flipping Increases Student Interaction One of the greatest benefits of flipping is that overall interaction increases: Teacher to student and student to student. Some might ask how we developed a culture of learning. There are a myriad of reasons why a student is not learning well. Are you Ready to Flip?

Isaac Asimov on the Thrill of Lifelong Learning, Science vs. Religion, and the Role of Science Fiction in Advancing Society by Maria Popova “It’s insulting to imply that only a system of rewards and punishments can keep you a decent human being.” Isaac Asimov was an extraordinary mind and spirit — the author of more than 400 science and science fiction books and a tireless advocate of space exploration, he also took great joy in the humanities (and once annotated Lord Byron’s epic poem “Don Juan”), championed humanism over religion, and celebrated the human spirit itself (he even wrote young Carl Sagan fan mail). 8 Observations on flipping the classroom One of the more unfortunate buzzwords to appear in online education circles and the press is “flipping the classroom”. This means that instead of lecturing students in lessons in school, the teacher records the lecture as a video and uploads it to YouTube – or recommends other people’s videos to the students. The students watch the videos for homework, freeing up the lesson for interactivity, project work and so on. Would you REALLY want to watch this every night?!I not impressed with this brilliant “new” idea. Why not?

Five Best Practices for the Flipped Classroom Ok, I'll be honest. I get very nervous when I hear education reformists and politicians tout how "incredible" the flipped-classroom model, or how it will "solve" many of the problems of education. It doesn't solve anything. It is a great first step in reframing the role of the teacher in the classroom. It fosters the "guide on the side" mentality and role, rather than that of the "sage of the stage." Learning Platform - itslearning Elisabeth Engum records herself explaining a maths concept for her students and posts the video on itslearning. She asks her students to watch the video at home in the evening, and in class the next day the students complete exercises related to the video. They work together or individually while Elisabeth moves between students helping them solve the equations. Flipping the traditional classroom This is the flipped classroom in action. In the traditional classroom, the teacher is restricted to teaching students from the front of the classroom on the whiteboard.

The Flipped Classroom Model: A Full Picture Due to Khan Academy’s popularity, the idea of the flipped classroom has gained press and credibility within education circles. Briefly, the Flipped Classroom as described by Jonathan Martin is: Flip your instruction so that students watch and listen to your lectures… for homework, and then use your precious class-time for what previously, often, was done in homework: tackling difficult problems, working in groups, researching, collaborating, crafting and creating. Awesome Chart Comparing Traditional Versus 21st Century Learning February 4, 2015 In his classic book “Education and Experience” John Dewey talks about the dichotomy between traditional and progressive forms of education saying that such a dichotomy polarizes discussions around educational matters. Dewey, instead, argued for an experience-based model that builds on the drawbacks and strengths of both models to form a holistic conceptualization of what a student-centred education should be like. Today, as I stumbled upon this beautiful chart on Mindhsift’s Facebook page I could not help but connect it to Dewey’s discussion of experiential and progressive learning. What in the chart is labelled 21st century learner is in fact the kind of learner Dewey theorized in his work more than half a century ago.

Debating the 'Flipped Classroom' at Stanford - Wired Campus Stanford University got lots of attention for inviting the public to participate in a series of free online computer-science classes. One thing that’s drawn less notice is how some of the technologies that help facilitate those mega-classes are changing the experience for Stanford students learning the same subjects. Now a Stanford student is provoking a debate on those innovations, with a blog post critiquing the rigor and format of the “flipped classroom” teaching method deployed in his machine-learning course.

Flipped Classrooms — Tennessee Teaching and Learning Center by guest writer Karen Brinkley If asked to describe a traditional college classroom and style of pedagogy, most people would probably think of students who come to a classroom of chairs in rows to listen to a professor deliver a lecture, and who then did textbook readings and assignments at home. Yet those who have experienced a flipped classroom would describe something completely different. Flipping classrooms is a fairly recent and growing trend sweeping through classrooms across the country. And the name is pretty fitting. Finding the right resource to support flipped classrooms in the UK What if traditional methods of classroom teaching and ‘homework’ were switched? Teaching professionals have constantly looked at improving ways of raising learner engagement and attainment. While some have fared better than others, it is technology that has offered the greatest scope for innovation, helping the teacher to spend more time supporting students directly rather than instructing them from the front of the class. Flipped or reversed teaching is not a new concept; it dates back to the early nineties where it was trialled in a study on Peer Instruction at Harvard University. The basis of Professor Eric Mazur’s study was to integrate computer software into the classroom in order to allow the teacher to act as a coach rather than a lecturer. Today, the purpose of flipped learning has not changed.

TED-Ed, Khan Academy Enable Flipped Classrooms Educators interested in “flipping” their classroom (that is, providing traditional lecture material for review at home and problem-solving exercises in the classroom) now have two more options to provide core content with a minimum of effort. Yesterday TED announced TED-Ed, a service designed to “capture and amplify the voice of the world’s greatest teachers.” In addition to hosting the videos, TED-Ed works with educators to review lessons and ensure they are less than 10 minutes. After the educator records and uploads the audio/video, TED-Ed works with animators to create story reels for each lesson, reports say. (For a complete rundown of TEDed, see video below.) Also this week, Kahn Academy announced a new iPad app.