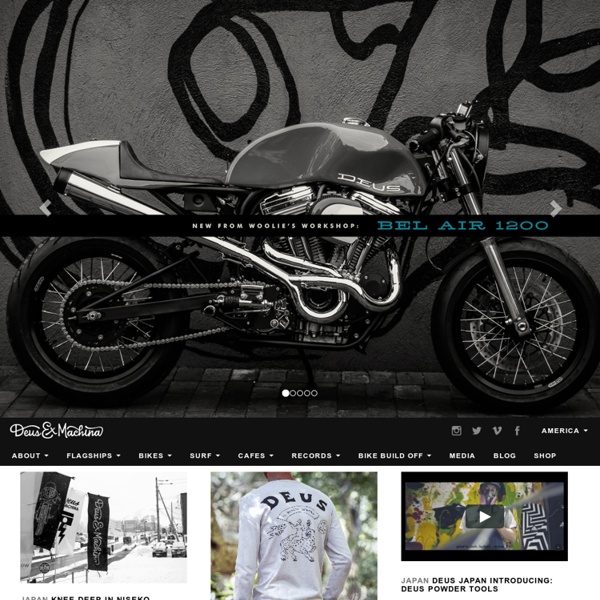 Classic motorcycles, custom motorcycles and cafe racers Most Recent Posts Saturday 12th April, 2014 Wednesday 9th April, 2014 Thursday 27th March, 2014 Wednesday 26th March, 2014 Smartphones: Making Us More Social Or Less? People use smartphones more often, and in a greater variety of ways, to contribute to -- and avoid -- group gatherings, according to new Pew research. 9 Ways Technology Is Slowly Killing Us All (Click image for larger view and slideshow.) Do you answer text messages when at the dinner table? What about checking Instagram when waiting in line for coffee? Roland Sands Design POSTED Wednesday, March 30, 2011 Blog 23 COMPLETE Here’s a few shots of the new owner and her brand new KTM. Lucky girl….and if you ask us, lucky bike too.

Motorcycles Vismaior Motorcycles Vismaior 3D is a new company that specialises in helping people model their ideas for a custom motorcycle, without turning a wrench. If you want to create a unique custom and want know exactly how it’ll look before you buy a single part, the team at Vismaior will model your motorcycle of choice in impeccable… Read More BMW R90/6 Custom Online shopping and Americans' purchasing preferences America has long been a nation of shoppers, and that is as true online as it is in the physical world. The earliest modern e-commerce transactions date to just 1994, but by 2015 Americans were spending nearly $350 billion annually online – or roughly 10% of all retail purchases, excluding automobiles and fuel. Pew Research Center surveys of digital commerce tell a similar tale.

Motorcycle Shopper While the Honda CB350 engine in stock form is quite potent, it lends itself quite readily to some added horsepower.If you choose not to build up your engine right away, you still need to disassemble it, check it out and replace any worn components. If you decide to get it blueprinted and balanced (making sure your pistons are equal weight, rods are equal weight, carbs to intake and intake to heads are matched, etc. ) you will find this alone will make the engine much faster and reliable than before. Since I already had racing experience, I opted for more performance. I chose the 123-20 cam from MEGACYCLE CAMS, San Rafael, California. These cams must be used with racing pistons.