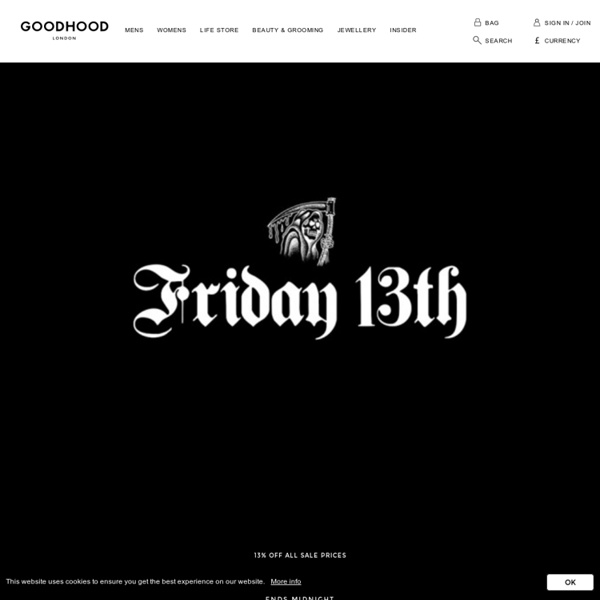 Dickies Pants Mens : Dickies Founded in 1918 as the 'U.S. Overall Company', Dickies has steadily grown to become one of the worlds most recognisable workwear manufacturers. After manufacturing the uniforms for the Amer... Read more Clu SS14 Womens : Clu Los Angeles natives Clu have delivered their stellar SS14 collection to the women's floor with the brands unmistakable soft and sculptural approach a prominent feature throughout the select... Read more NUD Lighting Life Store : NUD Lights Swedish lighting experts NUD continue to deliver a stand out collection of cord lights, with new styles arriving at the Life Store in a range of colours and materials including classic porc... Read more

Livestock - LIVESTOCK Canadian Sneaker Boutique Antisocial Vaaaanesssaaaa (we miss you !) and Lizzie and all the new young ladies shredhersfrom the south showing us how its suppose to go . thank you ladies . time to grind . Thaaaaaank You , oh so !! ps.we miss you ladies from the south love from the north . About - The Modern Society Modern Society is a London based general store, dedicated to bringing a selection of luxury products from around the globe. The store is a destination, unveiling emerging and established brands. Whether you are in need of creative inspiration, a diverse shopping experience or even a quality coffee break, look no further.

The New Anthropologie + Co in Walnut Creek - The Vintage Rug Shop The Vintage Rug Shop This past Friday was a very exciting day for all East Bay-ers. The first ever Anthropologie + Co opened up in Walnut Creek, just 10 minutes from my house! Walnut Creek is quickly becoming a shopping mecca, which makes me so happy because it’s seriously a pain in the butt going to SF – most non-SF residents avoid it as much as they can. Active In Style flagship store by Unibox, London – UK Active In Style is a predominantly e-commerce business, sourcing and selling new and modern activewear for women. With the recent boom in the health and fitness industry, which has subsequently influenced a ripple effect in activewear in the retail sector, Active In Style were looking to open a flagship store in London to maximise their physical presence. A lightbox was placed at the rear of the store to draw customers through the space. The Ledge 65 Magnetik lightbox is an easy, cost-effective graphic display tool that is quick to refresh with new graphics and easy to re-configure the magnetic shelves and hooks. Custom perimeter units designed to fit into recessed alcoves in the surrounding walls were made using the 25|25 modular system for a sleek, modern and monochromatic look and feel. Designed by Unibox

UNIQLO Launches Exceptional Landmark Store in Fashionable Paris District of le Marais - Latest in Expansion Across France - UNIQLO today announces the April 2014 opening of a new location in France, an exceptional landmark store in the fashionable Paris district of le Marais. Located in a mid-19th century former foundry, the new store will showcase this beautifully preserved historic site, amidst UNIQLO's selected line of men's and women's collections - with a particular nod to its Spring and Summer 2014 collaboration with Parisian chic fashion icon Ines de la Fressange. Commenting on today's announcement, Berndt Hauptkorn, Fast Retailing Group Officer and UNIQLO Europe CEO, said, "Our latest store epitomizes effortless Parisian style, and is a truly unique concept, steeped in the history of the chic French capital. We are very pleased to bring this exceptional store to both locals and visitors alike, as we continue our expansion across Europe and worldwide."

You can pay for your lunch at this Covent Garden cafe with a 10 minute work out If you’re carrying more pounds round your waist than in your wallet, you might want to head down for lunch in Covent Garden. Because a pop-up cafe is launching this week where you don’t have to spend a penny and they’ll help you get fit. This 'gin and tonic' is perfect for Dry January Rather than splashing your cash on lunch, you pay for food by exercising. The Run For Your Bun Cafe claims to be ‘the first cafe that takes exercise for payment’. This means all the cash tills and contactless payment docks have been replaced with tread mills, spin bikes and rowing machines. BrewDog to open beer-themed hotel after crowdfunding £19m The Scottish brewer raised £19m of its £25m goal in its latest round of crowdfunding, which ended last week after running for a year. It was initially aiming to use the money to expand its UK bar estate, build a new Brewhouse and a beer-themed hotel in Aberdeen called The Kennel. However, a spokeswoman for BrewDog told BigHospitality that despite falling short on funding the plans would still be going ahead. She said: “The £25m target was the upper limit of what we were able to raise in this round, and to reach £19m, with 42,000 craft beer obsessed shareholders in our ranks, is an absolutely incredible achievement and something we’re massively proud of. “Despite falling slightly short of the upper limit, all our future plans are still firmly set to go ahead as before.”

MVRDV and ADEPT complete KuBe community center sep 02, 2016 MVRDV and ADEPT complete community center in copenhagen to encourage an active lifestyle MVRDV and ADEPT have completed ‘KuBe’, an activities hub in copenhagen that explores the themes of culture, health, and movement. facilitating both fixed and spontaneous programs, the building serves as a community space that focuses on developing a healthy lifestyle. internally, main volumes determine specific activities, while voids have been left without a defined use to let users interpret them in different ways. activity spills out into the community as a garden, which offers a variety of interactive environments. all images by adam mørk Smartphones: Making Us More Social Or Less? People use smartphones more often, and in a greater variety of ways, to contribute to -- and avoid -- group gatherings, according to new Pew research. 9 Ways Technology Is Slowly Killing Us All (Click image for larger view and slideshow.) Do you answer text messages when at the dinner table?

Online shopping and Americans' purchasing preferences America has long been a nation of shoppers, and that is as true online as it is in the physical world. The earliest modern e-commerce transactions date to just 1994, but by 2015 Americans were spending nearly $350 billion annually online – or roughly 10% of all retail purchases, excluding automobiles and fuel. Pew Research Center surveys of digital commerce tell a similar tale. When the Center first asked about online shopping in a survey conducted in June 2000, just 22% of Americans indicated that they had ever made a purchase online. But in the intervening years that figure has increased nearly fourfold: Today, 79% of Americans say they make purchases online. And in an era of widespread social media use and smartphone access, many Americans are incorporating these devices and platforms into their purchasing behaviors.