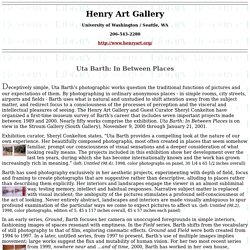 By photographing in ordinary anonymous places - in simple rooms, city streets, airports and fields - Barth uses what is natural and unstudied to shift attention away from the subject matter, and redirect focus to a consciousness of the processes of perception and the visceral and intellectual pleasures of seeing. The Henry Art Gallery and Guest Curator Sheryl Conkelton have organized a first-time museum survey of Barth's career that includes seven important projects made between 1989 and 2000. Exhibition curator, Sheryl Conkelton states, "Uta Barth provides a compelling look at the nature of our own experience. Prompt our consciousness of visual sensations and a deeper consideration of what looking really means. 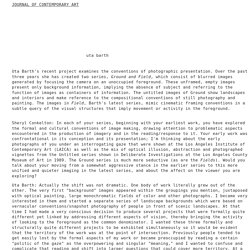 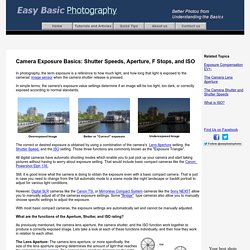 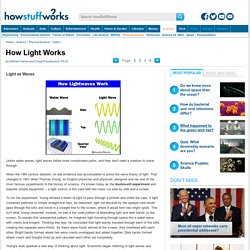 When the 19th century dawned, no real evidence had accumulated to prove the wave theory of light. That changed in 1801 when Thomas Young, an English physician and physicist, designed and ran one of the most famous experiments in the history of science. It's known today as the double-slit experiment and requires simple equipment -- a light source, a thin card with two holes cut side by side and a screen.

To run the experiment, Young allowed a beam of light to pass through a pinhole and strike the card. If light contained particles or simple straight-line rays, he reasoned, light not blocked by the opaque card would pass through the slits and travel in a straight line to the screen, where it would form two bright spots. Young's work sparked a new way of thinking about light. Aperture and Shutter Priority Modes. Over the last few weeks we’ve been looking at different elements of exposure and how to move out of the ‘Auto’ mode on your digital camera. 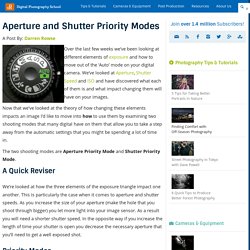 We’ve looked at Aperture, Shutter Speed and ISO and have discovered what each of them is and what impact changing them will have on your images. Now that we’ve looked at the theory of how changing these elements impacts an image I’d like to move into how to use them by examining two shooting modes that many digital have on them that allow you to take a step away from the automatic settings that you might be spending a lot of time in. The two shooting modes are Aperture Priority Mode and Shutter Priority Mode. A Quick Reviser We’re looked at how the three elements of the exposure triangle impact one another. How & When to Use Aperture Priority Mode » Expert Photography. It dawned on me yesterday that I’ve written about shooting modes, and I’ve written about exposure, but I’ve never written about how and when you might use certain modes. 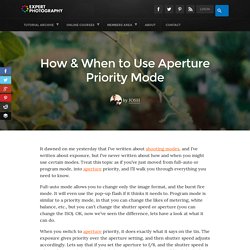 Treat this topic as if you’ve just moved from full-auto or program mode, into aperture priority, and I’ll walk you through everything you need to know. Full-auto mode allows you to change only the image format, and the burst fire mode. It will even use the pop-up flash if it thinks it needs to. Program mode is similar to a priority mode, in that you can change the likes of metering, white balance, etc., but you can’t change the shutter speed or aperture (you can change the ISO). OK, now we’ve seen the difference, lets have a look at what it can do. When you switch to aperture priority, it does exactly what it says on the tin. Sunny 16 Rule and Equivalent Exposures. Understanding Exposure - SimCam - Film and Digital Camera Simulator - Photonhead.com. Canon EOS - Getting Started: ISO, Shutter Speed and Aperture Tutorial. Photography - ISO, What it Means and What it Does.

ISO or ASA in Photography – Sensitivities in Camera Sensors ISO (I.S.O.) is the abbreviation for the International Organization of Standardization, a governing body based in Europe that provides the standards for a wide variety of subjects. 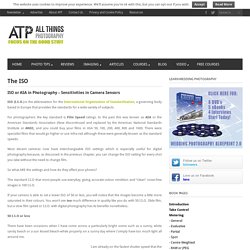 For photographers the key standard is Film Speed ratings. In the past this was known as ASA or the American Standards Association (Now discontinued and replaced by the American National Standards Institute or ANSI), and you could buy your films in ASA 50, 100, 200, 400, 800 and 1600. There were specialist films that would go higher or use infra-red although these were generally known as the standard speeds. Most decent cameras now have interchangeable ISO settings which is especially useful for digital photography because, as discussed in the previous chapter, you can change the ISO setting for every shot you take without the need to change film.

So what ARE the settings and how do they affect your photos? 50 I.S.O or less Standard I.S.O – 100 Quality.