XING – For a better working life. Algeria: Professional Social Network. Facial Recognition Search Engine. Powered by the FacialNetwork.com. Free People Search Tool. Yes, Rapportive Is All #$%@ed Up Right Now. It was bad enough that LinkedIn bought the incredibly useful Gmail widget maker Rapportive, which offers a lightweight CRM tool that shows your contacts’ social accounts and recent updates, then proceeded to rip out the functionality that made the thing popular in the first place. 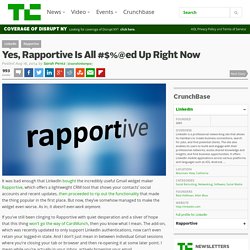 But now, they’ve somehow managed to make the widget even worse. As in, it doesn’t even work anymore. If you’ve still been clinging to Rapportive with quiet desperation and a sliver of hope that this thing won’t go the way of CardMunch, then you know what I mean. The add-on, which was recently updated to only support LinkedIn authentications, now can’t even retain your logged-in state.

And I don’t just mean in between individual Gmail sessions where you’re closing your tab or browser and then re-opening it at some later point. Where once you had a sidebar filled with useful contact information and simple tools to follow the contact on LinkedIn, Facebook and Twitter, you now have this: Like, all the time. How Email Apps Will Help You Learn To Love Your Inbox Again.

Email has taken over our lives, and most of us hate it. 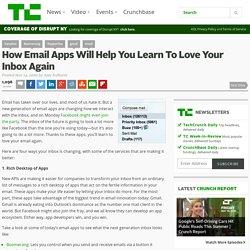 But a new generation of email apps are changing how we interact with the inbox, and on Monday Facebook might even join the party. The inbox of the future is going to look a lot more like Facebook than the one you’re using today—but it’s also going to do a lot more. Thanks to these apps, you’ll learn to love your email again. Here are four ways your inbox is changing, with some of the services that are making it better: 1.

New APIs are making it easier for companies to transform your inbox from an ordinary list of messages to a rich desktop of apps that act on the fertile information in your email. Take a look at some of today’s email apps to see what the next generation inbox looks like: 2. Here’s where your inbox can learn from Facebook. 3. Thanks to one group of apps, your email is becoming a UNIX-like shell to run commands and interact with services via the compose window. These startups are riding two major trends. 4. Ark Launches Rapportive-Meets-Mailbox Email App In Pivot To Marketing Intelligence. Need to do some homework on who you’re emailing? 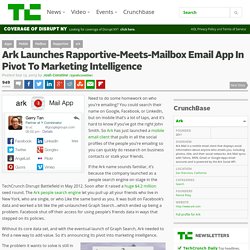 You could search their name on Google, Facebook, or LinkedIn, but on mobile that’s a lot of taps, and it’s hard to know if you’ve got the right John Smith. So Ark has just launched a mobile email client that pulls in all the social profiles of the people you’re emailing so you can quickly do research on business contacts or stalk your friends. If the Ark name sounds familiar, it’s because the company launched as a people search engine on stage in the TechCrunch Disrupt Battlefield in May 2012. Soon after it raised a huge $4.2 million seed round. The Ark people search engine let you pull up all your friends who live in New York, who are single, or who Like the same band as you. Without its core data set, and with the eventual launch of Graph Search, Ark needed to find a new way to add value. The problem it wants to solve is still in people search, but from a new angle.

Why? The apps are free and won’t show any ads. The 15 Best Browser Extensions to Improve Your Social Media Marketing. This post originally published on September 22, 2014. 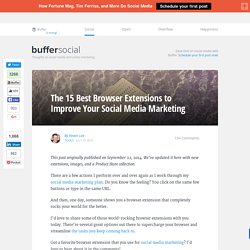 We’ve updated it here with new extensions, images, and a Product Hunt collection. There are a few actions I perform over and over again as I work through my social media marketing plan. Do you know the feeling? You click on the same few buttons or type in the same URL. And then, one day, someone shows you a browser extension that completely rocks your world for the better.