Weapons of Reason (@weaponsofreason) Law magazine on Tumblr. Millennials Infographic. The Slow Movement advances into reading and journalism. The BBC has been slow to pick up on the trend, but its Slow TV experiment on BBC 4 last weekend was welcome. 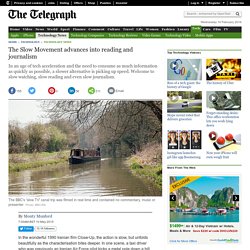 Viewers could choose from a two-hour canal boat wend its way down the Kennet and Avon Canal, an hour of birdsong or 30 minutes of a man making a glass jug. This appeal of slow viewing is not just a British or Italian thing. In 2009 Norwegian broadcaster NRK showed in full a seven-hour rail journey from Oslo to Bergen and followed this in 2011 with a 134-hour cruise ship journey, which was watched by more than half the COUNTRY. Even slow filmmaking is coming back. The iPlayer-only release of Adam Curtis’s extraordinary documentary Bitter Lake contains a scene that is even more effective than the metal pole in Close-Up. Even journalism is benefiting from the move away from perpetually spinning news cycles and lack of attention to stories once the breaking part of news is over. A-Z of Beauty Together. Rosie tapner is harder, better, faster, stronger.

Natalie westling skateboard etiquette. Marc jacobs tribes: the bronx bmx crew. Relocate: lisbon - episode 1. Get ​lost in music. From lost loves to lost evenings: readers share their memories of one club towns. "The Matrix in Ripon (recently closed) had a revolving dance floor with a podium in the middle and a takeaway INSIDE the club. 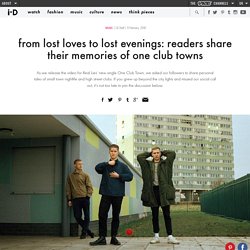 Also a shots bar where they served squashed frogs which are surprisingly great. So grotty, so many funny stories. " @alicehudson9 "Paradise in Pontardawe, South Wales, which was anything but paradise! It seemed that most people's highlight was watching the fights in the underpass when the club closed. "Welcome to Jagos in Dorchester, Dorset - the only place open past 2am! "Ohhhh boy. "Plymouth, now home to strict bouncers and restricted venues, but when I was 16 they'd let you in with ID that Stevie Wonder helped you forge. "Batchwood in St Albans, Hertfordshire is best described as the place everyone goes when they're 18 and no-one goes when they're 19. "Yates, Wetherspoons, and an independent bar called Twisters is all Colchester had to offer.

"Seaford on the south coast. "The Warehouse in Preston was simply the best club. "Club-Fever. Adidas goes even more tubular with a new video. Aleali May in Tubular Future In 2016 adidas is thinking about the future. 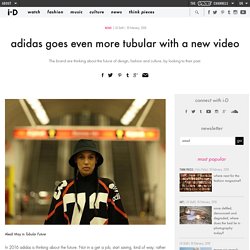 Not in a get a job, start saving, kind of way; rather they're looking at their own philosophy and past, to revisit the ideas that got them to this point. Part of this process has involved literally reinventing the classics. While this can be seen across the brand, the Tubular range is where it's really being explored. The whole collection is created from what they call "abstracted, collective memories of the adidas archives". The Tubular Doom. In line with the drop they've released Tubular Future the video follow up to Your Future Is Not Mine, that introduced seven artists and cultural influencers as part of its new Future campaign. The Official Jaden Smith Website. Ideas on Paper Notts Tue - Sun (@ideas_on_paper) Ideas on Paper. Odiseo Vol. 5: (Not) Safe for Work.

Since our initial introduction to Odiseo just over two years ago, we've been hooked. 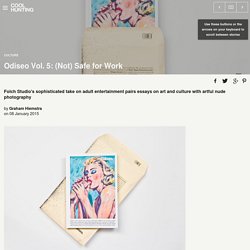 With each volume, the sophisticated adult publication delivers thought-provoking texts and essays on subjects ranging from art and culture to existentialism, interspersed between sections of artful nude photography. Published as an independent venture by Barcelona-based Folch Studios, Odiseo is expertly laid out and well-designed. Entitled "(Not) Safe for Work" and released today, 8 January 2015, Volume 5 continues the modest publication's bold legacy of being unpredictable, entertaining and though erotic by nature—never distasteful. Eschewing the black-and-white-photograph-with-paint-splatter template laid by the first four volumes, a bright and beautiful painted portrait by artist Ángela Palacios (who also contributed to Vol. 3) graces the cover of Vol. 5. And, as an ode to the conventional newsstand nudie mag's conservative paper sleeve cover, the latest volume comes hidden in a brown bag.