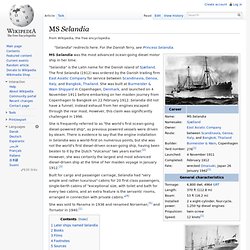 "Selandia" is the Latin name for the Danish island of Sjælland. The first Selandia (1912) was ordered by the Danish trading firm East Asiatic Company for service between Scandinavia, Genoa, Italy, and Bangkok, Thailand. She was built at Burmeister & Wain Shipyard in Copenhagen, Denmark, and launched on 4 November 1911 before embarking on her maiden journey from Copenhagen to Bangkok on 22 February 1912. Www.man-netvaerk-alpha.com/historie/BW 1959.pdf. Vol 2/Issue 9/IJEIT1412201303_48.pdf. Www.ewea.org/fileadmin/ewea_documents/documents/publications/WETF/Facts_Volume_2. Wind Turbines for Electricity. In 1888, the first large wind generator began producing power. 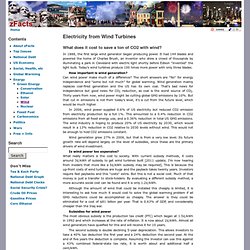 It had 144 blades and powered the home of Charles Brush, an inventor who drew a crowd of thousands by illuminating a park in Cleveland with electric light shortly before Edison "invented" the light bulb. Today's wind turbines produce 100 times more power with only three blades. How important is wind generation? Can wind power make much of a difference? The short answers are "No" for energy independence and "some but not much" for global warming. Energy Conversion - RapidTables.com. Energinet. WEATHERFIELD 2010 - LATERAL OFFICE. Land Art Generator Initiative Public park and energy-generating source Abu Dhabi, UAE /// 2010 WeatherField is a shape-shifting energy generation park along a strip of sandy beach in Abu Dhabi between Yas and Saadiyat Islands. 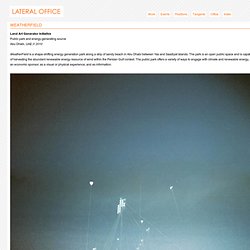 The park is an open public space and is capable of harvesting the abundant renewable energy resource of wind within the Persian Gulf context. An animated map of global wind and weather. Artbeat installs massive fiber art on Dillingham Street Bridge. The artist Rachel Hayes has finished installing her largest — and favorite — work to date: beneath the Dillingham Street Bridge now hang two brightly-colored inverse arches made entirely of nylon and sheer polyester. 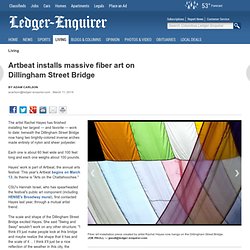 Each one is about 60 feet wide and 100 feet long and each one weighs about 100 pounds. Hayes' work is part of Artbeat, the annual arts festival. This year's Artbeat begins on March 13; its theme is "Arts on the Chattahoochee. " Patrick Marold Visualizes the Wind With Thousands of Turbine-Powered LEDs Windmill Project-Patrick Marold - Gallery Page 14. Although we can't normally see the wind, we can feel its presence - however Colorado-based visual artist Patrick Marold has figured out a way to translate the wind's movement into light. 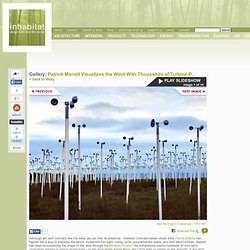 Using LEDs, polycarbonate tubes, and mini wind turbines, Marold has been documenting the shape of the wind through his Windmill Project. His installations involve hundreds of mini wind generators planted in breezy landscapes - as the wind blows across them, the LEDs light up based on the strength of the wind and where it blows. His project draws attention to the use of clean renewable energy and our interaction with the landscape and natural forces. Marold first started his project in 2000 when he was living on a farm north of Reykjavik. One (1) Thing @ a Time - Jason Krugman. 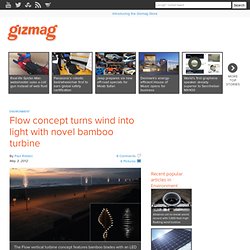 Wind Lamp: Lighting the Future. Conceived by the designer Kyung Kuk Kim, Wind Lamp is built with LEDs and powered by a specialized wind-harnessing generator that also powers other street lamps. 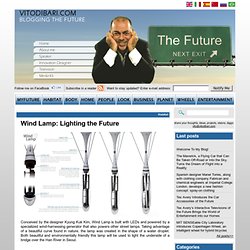 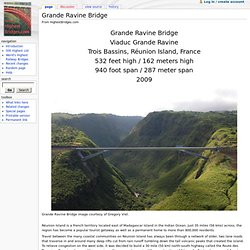 Réunion Island is a French territory located east of Madagascar Island in the Indian Ocean. Just 35 miles (56 kms) across, the region has become a popular tourist getaway as well as a permanent home to more than 800,000 residents. Travel between the many coastal communities on Réunion Island has always been through a network of older, two lane roads that traverse in and around many deep rifts cut from rain runoff tumbling down the tall volcanic peaks that created the island.

Dropping almost vertical for much of its 532 foot (162 mtr) depth, the Grande Ravine site is perfect for a frame bridge. Truss. Truss bridge for a single-track railway, converted to pedestrian use and pipeline support An Egyptian ship with a rope truss, the oldest known use of trusses. 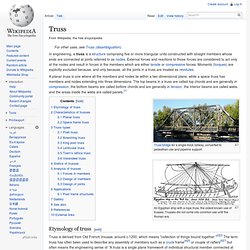 Trusses did not come into common use until the Roman era. Etymology of truss[edit] Truss is derived from Old French trousse, around c.1200, which means "collection of things bound together. The Copenhagen Harbour Bus - Transportation With A Water View. The Copenhagen harbour bus is one of the newer options getting around in the old part of town. 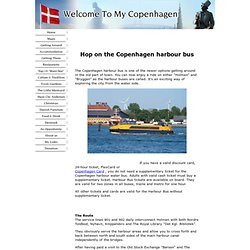 You can now enjoy a ride on either "Holmen" and "Bryggen" as the harbour buses are called. It's an exciting way of exploring the city from the water side. If you have a valid discount card, 24-hour ticket, FlexCard orCopenhagen Card , you do not need a supplementary ticket for the Copenhagen harbour water bus. Adults with valid cash ticket must buy a supplementary ticket. Harbour Bus tickets are available on board. Salto. SMIT Solar Ivy. As many ground plants vie for coveted food sources, ivy has found a niche that allows it to get enough sunlight and nutrients without having to compete with its fellow ground plants. By growing vertically using another structure for support, ivy receives direct sunlight without having to compete with other plants. SMIT is working to take advantage of this very unique niche as well with the Solar Ivy system. Perhaps of more interest from a biomimetic standpoint is the story of how SMIT is following many of Life's Principles in how it makes, uses, and deals with end-of-life issues of their product.

The entire life cycle of the design is based on principles in nature, and through the creative use of existing alternative energy technologies and the intentional incorporation of sustainable design ethic, Solar Ivy has the potential to be one of the most sustainable solar and wind energy technologies on the market. Land Art Generator Initiative. Engineers Harness the Power of Wind, Tornadoes Become Merely Frenemies. When you hear the word “tornado,” what do you think of? Destruction? Vibro-Wind. FLOWE wind farm design. Windbelt - Reinventing wind power. If you look up aeroelastic flutter on Youtube, the first thing you’ll find is footage of the spectacular Tacoma Narrows bridge collapse back in 1940. Windbelt Large. Land Art Generator Initiative 2014 Design Competition. Submissions will be accepted until May 18, 2014 at 23:59 (11:59pm) GMT.

There are no restrictions on team size and/or makeup. The competition is open to everyone, but is in particular aimed at artists, urban planners, architects, landscape architects, and engineers. It is recommended (but not mandatory) that the team be comprised of interdisciplinary members so as to arrive at the most well-conceived result but we also recognize that great ideas can spring from individual efforts as well. 99 Red Balloons. 2012 Fourth Place Mention 99 Red Balloons Artist Team: Scott Rosin, Meaghan Hunter, Danielle Loeb, Emeka Nnadi, Kara McDowell, Jocelyn Chorney, Indrajit Mitra, Narges Ayat, Denis Fleury Artist Location: Winnipeg, Canada Download (DOC, 43KB)