Focal length comparisons - Luminous Landscape. How to Buy a DSLR. DSLR cameras represent what is often considered the preëminent digital capture technology available today, through their meshing of the highest image quality, speed, intuitive design, and modular capabilities to suit nearly any type of photography imaginable. 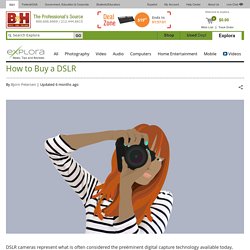 Representing the first step toward serious photography for many, or simply additional tools or upgrades for the veteran, DSLRs cover a broad expanse of capabilities and are often intended to meet specific goals while still retaining the overall imaging benefits that are suitable to many. From their beginning, DSLRs were designed to reflect the most popular type of film camera, the SLR. This single-lens reflex design traditionally incorporates an optical viewfinder, reflex mirror, and single taking-and-viewing lens to function properly. Lenses One of the most important characteristics to consider when choosing your ideal DSLR is its compatible system of lenses. DSLR Types and Sensor Size Other Form-Factor Considerations Entry-Level.

Digital camera. Hasselblad 503CW with Ixpress V96C digital back, an example of a professional digital camera system A digital camera or digicam is a camera that captures photographs in digital memory. 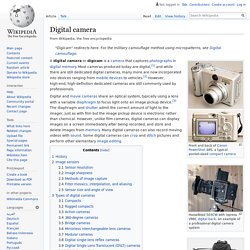 Most cameras produced today are digital,[1] and while there are still dedicated digital cameras, many more are now incorporated into devices ranging from mobile devices to vehicles.[2] However, high-end, high-definition dedicated cameras are still commonly used by professionals. History[edit] The history of the digital camera began with Eugene F. Lally of the Jet Propulsion Laboratory, who was thinking about how to use a mosaic photosensor to capture digital images. The Cromemco Cyclops was an all-digital camera introduced as a commercial product in 1975. 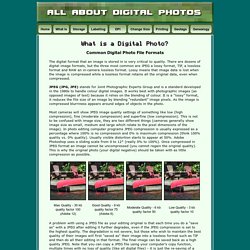 There are dozens of digital image formats, but the three most common are JPEG a lossy format, TIF, a lossless format and RAW an in-camera lossless format. Lossy means that image data is lost when the image is compressed while a lossless format retains all the original data, even when compressed. JPEG (JPG, JPE) stands for Joint Photographic Experts Group and is a standard developed in the 1980s to handle colour digital images. Quick Tip: What is a Full Frame Camera? - Tuts+ Photo & Video Article. If you are interested in gear, you've probably heard the term "full frame" camera frequently. 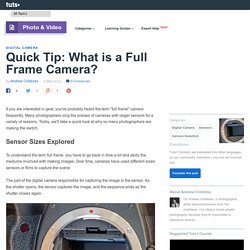 Many photographers sing the praises of cameras with larger sensors for a variety of reasons. Today, we'll take a quick look at why so many photographers are making the switch. To understand the term full frame, you have to go back in time a bit and study the mediums involved with making images. Over time, cameras have used different sized sensors or films to capture the scene. The part of the digital camera responsible for capturing the image is the sensor. The full frame sensor of the Canon 5D is much larger than APS-C sized DSLR's. With film cameras, the "sensor" was an individual frame of film that was exposed.

Prior to the full frame era, smaller sensors were much more prevalent in digital cameras. Even smaller are the sensors in point and shoots and our mobile phones. The top advantage among these is higher image quality. This visualization shows the difference in sensor size: Ted's Photographics - Camera Types. Digital cameras are becoming more popular and a number of designs are on the market. 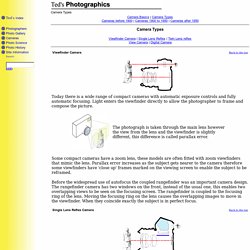 As digital cameras use electronics to capture and store the image they are not restricted to the traditional camera designs incorporating film transport mechanisms. Therefore their size and shape often vary greatly. Digital cameras usually incorporate an LCD (Liquid Crystal Display) viewing screen that displays the scene viewed through the lens. 3 Ways to Care for Your Camera.