Forbes Welcome. Forbes Welcome. HPE Enterprise.nxtVoice: Relying On Artificial Intelligence For The Answers: Do We Have A Choice? LIFE Relaunches As Virtual Reality Content Platform. The general interest periodical, which ceased publication in 2000, has turned into a portal for virtual reality content LIFE, which ceased regular publication in 2000, has been relaunched as a content portal for VR. 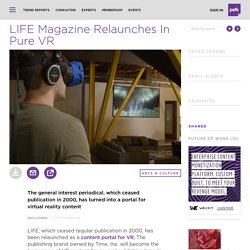 The publishing brand owned by Time, Inc. will become the homepage of VR content for several publishing brands including TIME, People, Sports Illustrated, Real Simple, Essence, Southern Living and InStyle. Life VR will be a free app for iOS and Android. There will be dedicated mobile apps for Cardboard, HTC Vive, Oculus Rift and the Samsung Gear VR. In the fall, LIFE VR will host all virtual reality content across all of Time Inc.’s channels and will support both desktop and mobile. 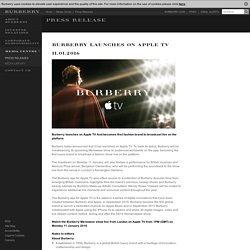 To mark its debut, Burberry will be livestreaming its upcoming Menswear show to audiences worldwide on the app, becoming the first luxury brand to broadcast a fashion show live on the platform. A Built-In Personal Trainer Wherever You Go. Future Thinking with EE. Mobile and Technology expert opinions. Many marketers and employers are still struggling to engage with Millennials or Generation Y and their range of technology, consumer and professional aspirations and desires. 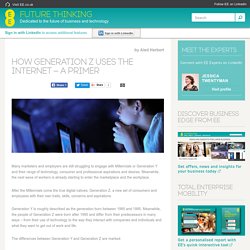 Meanwhile, the next wave of workers is already starting to enter the marketplace and the workplace. After the Millennials come the true digital natives, Generation Z, a new set of consumers and employees with their own traits, skills, concerns and aspirations. Generation Y is roughly described as the generation born between 1980 and 1995. These Garments Show Your Stress Levels In Real Time.

Why the 'New Mac' candle is selling like hotcakes. Mirror Scans Your Face And Prints The Perfect Makeup. Count Calories Simply By Taking A Picture Of Your Food. Augmented Reality Tech Lets You Put GIFs Into Your Real Life. GIPHY's new app lets creators place active animations onto their own videos GIPHY, the online database for searching and sharing animated GIF files, has relaunched its iPhone app to allow superimposed augmented reality animations onto real-life footage. 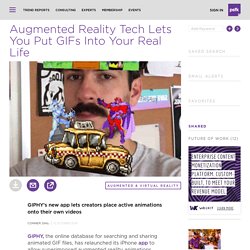 The GIPHY Cam 2.5 uses your phone’s camera to tack on moving animations—similar to Snapchat’s whacky lenses. However, unlike Snapchat, which allows users to send their AR animations to other users, the GIPHY app is only for exporting videos for other messaging services, so the interface is designed to be simple and quick. With apps like Pokémon Go, Snapchat and GIPHY pioneering augmented reality software into fun and wholly immersive experiences, AR tech is proving to be the next big thing in mobile apps. GIPHY also released its app for Android phones, though it currently lacks the AR-enabled software. Snapchat Scavenger Hunt Rewards People With Free Tacos. Dos Toros has set up special geofilters around NYC for participants to snap a photo to redeem a burrito What would you do for a free burrito? 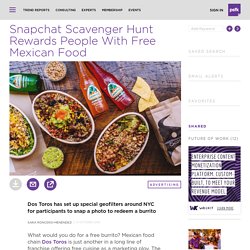 Mexican food chain Dos Toros is just another in a long line of franchise offering free cuisine as a marketing ploy. The catch is that hopeful diners will need to use social media to find the special promotion in a Snapchat scavenger hunt. To celebrate the opening of its 12th location in New York City, Dos Toros is turning nearby Bryant Park into Burrito Park. 7 Lessons For Retail in the Age of E-Commerce. NEW YORK, United States — In 2011, when fashion industry veteran Rachel Shechtman decided to enter the world of physical retail, she knew the concept would, in many ways, have to serve as an antidote to the traditional store experience. 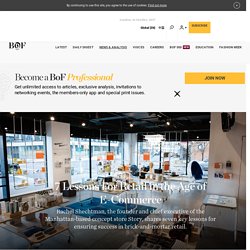 The result was Story, a 2,000-square-foot shop that gets a complete makeover — with a new design, range of products and marketing message — every four to eight weeks. Five years on, Story has become one of the most interesting studies in how people want to shop today. Its refreshing merchandising strategy, which relies on a rotating series of themes and sponsorship partners, is what helps the store stand apart from a sea of retailers struggling to understand the needs of customers whose demands have changed in the age of e-commerce.

If time is the ultimate luxury and people want a higher return on investment of their time, you need to give them a reason to be in a physical space. Story founder Rachel Shechtman | Source: Courtesy. Will Anthropologie Win Where Traditional Department Stores Have Failed? PHILADELPHIA, United States — Walking into an Anthropologie store is a sensory experience, incomparable in its visual richness and tactile quality to that of most other retailers. 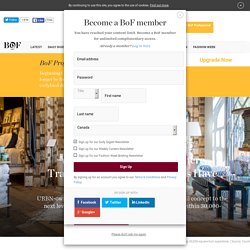 An ode to the cultured bohemian, a rainbow of floral-etched serving bowls might be stacked on a found-wooden table, a suite of turquoise-accented flatware laid out nearby. Just steps away, next to a velvet armchair piled with hand-woven pillows, one might find a rack of embroidered tunic dresses or patchwork skirts. But Anthropologie & Co., a nearly 30,000-square foot concept store that recently opened in the Northern California city of Walnut Creek, takes the 24-year-old retailer’s expertly honed merchandising philosophy to another level. On November 18, an Anthropologie & Co. location will open at the Stanford Shopping Center in Palo Alto, California. Alibaba's new payment system lets virtual reality shoppers pay by nodding. A Headset Gives Your Whole World A New Dimension. The Elsewhere device immerses iPhone users into a different dimension We are making greater strides than ever before to reach a new era dominated by 3D and virtual reality. 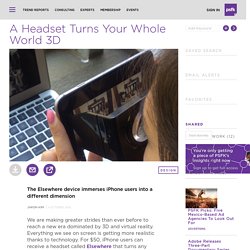 Everything we see on screen is getting more realistic thanks to technology. For $50, iPhone users can receive a headset called Elsewhere that turns any image on their phone into 3D. VR Forest Experience Lets You Relax And De-Stress. Experiment On An Unlimited Canvas With This VR Art Tool. Gravity Sketch lets artists sketch things in the air instead of on a flat screen Remember when the 3D pen came out? 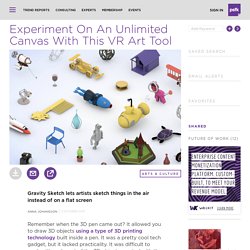 It allowed you to draw 3D objects using a type of 3D printing technology built inside a pen. The Mainstreaming of Augmented Reality: A Brief History. The launch of Pokémon Go this summer was a huge success—both for the gaming industry and for Augmented Reality (AR). 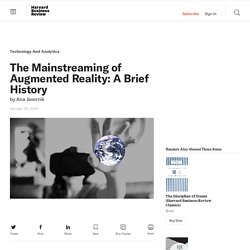 After launching in July 2016, the game hit its peak in August of almost 45 million users. Despite the fact that Niantic, the American software development company that developed Pokémon Go, has failed to maintain high levels of engagement on the game (its current user base is now 30 million users), the phenomenon demonstrated AR’s potential to be adopted by mainstream culture. Nicola Mendelsohn and Matt Brittin on VR, AI and why the future is bright for marketing. Brands should be testing virtual reality Nicola Mendelsohn: “[Brands should be] starting to test [virtual reality] but it’s very early days and not many people have these devices yet. David Eagleman: Can we create new senses for humans?