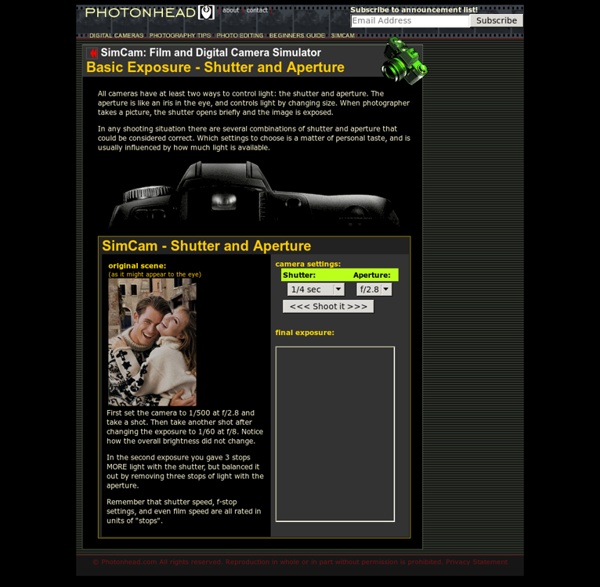 Basic Exposure - Shutter and Aperture All cameras have at least two ways to control light: the shutter and aperture. The aperture is like an iris in the eye, and controls light by changing size. When photographer takes a picture, the shutter opens briefly and the image is exposed. In any shooting situation there are several combinations of shutter and aperture that could be considered correct. Which settings to choose is a matter of personal taste, and is usually influenced by how much light is available. SimCam - Shutter and Aperture

Phase detection autofocus: how your DSLR's AF system actually works Have you ever wondered how your DSLR’s AF system works? Unlike other types of digital cameras, DSLRs use a phase detection autofocus system to get your subjects pin-sharp. Knowing how this works helps you learn how to focus more efficiently, and our latest photography cheat sheet illustrates exactly what your camera is doing when you half-press the shutter button. Focusing is one of those tasks that sounds like it ought to be easy, but often it’s not. How & When to Use Aperture Priority Mode » Expert Photography It dawned on me yesterday that I’ve written about shooting modes, and I’ve written about exposure, but I’ve never written about how and when you might use certain modes. Treat this topic as if you’ve just moved from full-auto or program mode, into aperture priority, and I’ll walk you through everything you need to know. Full-auto mode allows you to change only the image format, and the burst fire mode. It will even use the pop-up flash if it thinks it needs to. Program mode is similar to a priority mode, in that you can change the likes of metering, white balance, etc., but you can’t change the shutter speed or aperture (you can change the ISO). OK, now we’ve seen the difference, lets have a look at what it can do.

Learning about Exposure – The Exposure Triangle A Post By: Darren Rowse Bryan Peterson has written a book titled Understanding Exposure which is a highly recommended read if you’re wanting to venture out of the Auto mode on your digital camera and experiment with it’s manual settings. In it Bryan illustrates the three main elements that need to be considered when playing around with exposure by calling them ‘the exposure triangle’. Each of the three aspects of the triangle relate to light and how it enters and interacts with the camera. The three elements are:

DSLR vs Mirrorless: understanding the key differences In this DSLR vs mirrorless comparison we explain the key ways in which compact system cameras differ from DSLRs. We’ll explain how they work, features unique to each and everything else you need to know about DSLR and mirrorless cameras. Buy a DSLR on Amazon USBuy a DSLR on Amazon UKBuy a mirrorless camera on Amazon USBuy a mirrorless camera on Amazon UK Aperture and Shutter Priority Modes Over the last few weeks we’ve been looking at different elements of exposure and how to move out of the ‘Auto’ mode on your digital camera. We’ve looked at Aperture, Shutter Speed and ISO and have discovered what each of them is and what impact changing them will have on your images. Now that we’ve looked at the theory of how changing these elements impacts an image I’d like to move into how to use them by examining two shooting modes that many digital have on them that allow you to take a step away from the automatic settings that you might be spending a lot of time in. The two shooting modes are Aperture Priority Mode and Shutter Priority Mode.

Learn & Practice Camera Exposure Settings With CameraSim Using your own DSLR camera and a few good articles or books about lighting and image exposure, CameraSim might be a useful tool for learning about ISO, aperture and shutter speed settings, and shooting under various lighting conditions. You can hop over to CameraSim and start playing around with the settings, but if you have no prior knowledge about the subject, I present below a few explanations of settings that you can apply to get you started with the simulator. Overview Of CameraSim What’s useful about CameraSim is that it’s designed with the basic metering features found in DSLRs.

What is maximum aperture? Which lenses go widest (and why it matters) What is maximum aperture? It’s a question we often hear from new photographers who are getting to grips with their lenses or trying to understand depth of field. In this guide we explain what it means to set the maximum aperture, which lenses go widest and what you actually gain in terms of your images. Click on the infographic to see the larger version, or drag and drop to your desktop to save. The aperture setting of the lens controls the amount of light that passes through, so you can use this setting as part of your exposure adjustments. In dim light you can use a wider lens aperture so that more of the light gets through to reach the sensor, and in bright light you can use a smaller lens aperture to reduce the intensity.

Photography - ISO, What it Means and What it Does ISO or ASA in Photography – Sensitivities in Camera Sensors ISO (I.S.O.) is the abbreviation for the International Organization of Standardization, a governing body based in Europe that provides the standards for a wide variety of subjects. For photographers the key standard is Film Speed ratings. In the past this was known as ASA or the American Standards Association (Now discontinued and replaced by the American National Standards Institute or ANSI), and you could buy your films in ASA 50, 100, 200, 400, 800 and 1600. Camera-Exposure A photograph's exposure determines how light or dark an image will appear when it's been captured by your camera. Believe it or not, this is determined by just three camera settings: aperture, ISO and shutter speed (the "exposure triangle"). Mastering their use is an essential part of developing an intuition for photography. Achieving the correct exposure is a lot like collecting rain in a bucket.

What is a macro lens? Magnification and minimum focus distance explained In our latest photography cheat sheet we answer the question ‘What is a macro lens?’. In our infographic we explain some of the finer points of using macro lenses and illustrate the effects different magnifications can produce with your subjects. The official definition of a macro lens is that it should be able to reproduce a life-sized image of an object on the recording medium – in this case the image sensor.

Light as Waves Unlike water waves, light waves follow more complicated paths, and they don't need a medium to travel through. When the 19th century dawned, no real evidence had accumulated to prove the wave theory of light. That changed in 1801 when Thomas Young, an English physician and physicist, designed and ran one of the most famous experiments in the history of science. It's known today as the double-slit experiment and requires simple equipment -- a light source, a thin card with two holes cut side by side and a screen. To run the experiment, Young allowed a beam of light to pass through a pinhole and strike the card. If light contained particles or simple straight-line rays, he reasoned, light not blocked by the opaque card would pass through the slits and travel in a straight line to the screen, where it would form two bright spots.

The Complete Digital Photography Reciprocity Earlier, you learned that a stop is a measure of light. When you double the amount of light that hits the sensor, we say that you have increased the amount of light exposure by one stop. Conversely, if you halve the light, you decrease the exposure by one stop. Consider these shutter speeds: Camera Exposure Basics: Shutter Speeds, Aperture, F Stops, and ISO Overexposed Image Underexposed Image Better or "Correct" exposure Picture #2 Aperture F5, Shutter Speed 1/400, ISO 64 Picture #1 Aperture F10, Shutter Speed 1/400, ISO 64

Uta Barth uta barth Uta Barth's recent project examines the conventions of photographic presentation. Over the past three years she has created two series, Ground and Field, which consist of blurred images generated by focusing the camera on an unoccupied foreground.