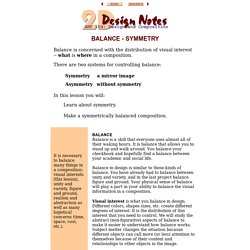 The shapes can overlap or be trimmed to make new shapes. Up to four colors may be used. The composition must have a vertical axis of symmetry. Biaxial symmetry may be used. There should be no reference to subject matter. Languages of Symmetry. Interview with Patrick Nagatani. Patrick Nagatani. UA Study: Your Brain Sees Things You Don’t. University of Arizona doctoral degree candidate Jay Sanguinetti has authored a new study, published online in the journal Psychological Science, that indicates that the brain processes and understands visual input that we may never consciously perceive. 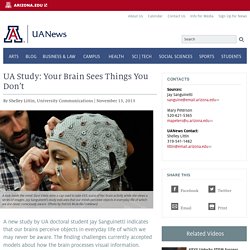 The finding challenges currently accepted models about how the brain processes visual information. A doctoral candidate in the UA's Department of Psychology in the College of Science, Sanguinetti showed study participants a series of black silhouettes, some of which contained meaningful, real-world objects hidden in the white spaces on the outsides. Saguinetti worked with his adviser Mary Peterson, a professor of psychology and director of the UA's Cognitive Science Program, and with John Allen, a UA Distinguished Professor of psychology, cognitive science and neuroscience, to monitor subjects' brainwaves with an electroencephalogram, or EEG, while they viewed the objects. Duane Michals: Personal Page. Lens.blogs.nytimes. We highly recommend viewing the slideshow in “full-screen” mode. 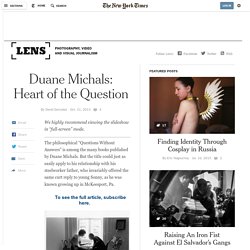 The philosophical “Questions Without Answers” is among the many books published by Duane Michals. But the title could just as easily apply to his relationship with his steelworker father, who invariably offered the same curt reply to young Sonny, as he was known growing up in McKeesport, Pa. “My father drank and smoked a lot, and if I asked him a question, he would always say, ‘Go look it up,’ ” Mr. Michals, 81, recalled last week. “I got used to going to dictionaries and books.

That love of the written word is a hallmark of Mr. Fittingly, a current show of his work at New York’s Osmos Address, “Duane Michals: Open Book,” lets viewers examine how he put together some of his best-known work. “I think Duane is happy because every artist should get to show their work like this,” said Cay Sophie Rabinowitz, the show’s curator and the founder of Osmos, which produces books, magazines and exhibits.

Interview: Duane Michals on 50 Years of Sequences and Staging Photos. Half Past Autumn: The Life and Work of Gordon Parks. Gordon Parks, a Master of the Camera, Dies at 93. Americans In Focus: Gordon Parks. A Great Black Photographer Remembers. Understanding the Color Managed Workflow. An Introduction to Color Management. Color management is a technology that if followed correctly ensures color fidelity throughout a digital workflow process. 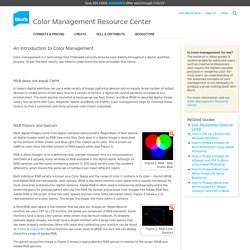 To get the best results, you need to understand the basic principles that follow. RGB does not equal CMYK In today’s digital workflow, we use a wide variety of image capturing devices and an equally large number of output devices to create prints of this data. Due to a variety of factors, a digital file cannot perfectly correspond to a printed sheet. The most glaring mismatch is because we use Red, Green, and Blue (RGB) to describe digital image colors, but we print with Cyan, Magenta, Yellow, and Black ink (CMYK).

RGB Flavors and Gamuts Figure 1. Most digital images come from digital cameras and scanners. RGB is often thought of as a definitive color number. Figure 2. A third RGB color space is the monitor that we view our images on. Photographing snow. Snowy landscapes are among the trickiest situations to photograph with digital cameras. 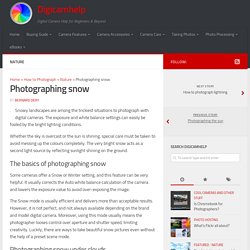 The exposure and white balance settings can easily be fooled by the bright lighting conditions. Whether the sky is overcast or the sun is shining, special care must be taken to avoid messing up the colours completely. The very bright snow acts as a second light source by reflecting sunlight shining on the ground. The basics of photographing snow Some cameras offer a Snow or Winter setting, and this feature can be very helpful. 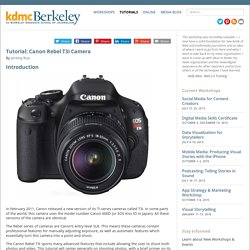 In some parts of the world, this camera uses the model number Canon 600D (or EOS Kiss X5 in Japan). All these versions of the camera are identical. The Rebel series of cameras are Canon’s entry-level SLR. The Canon Rebel T3i sports many advanced features that include allowing the user to shoot both photos and video. Some basic specifications of the T3i Here are a few of the specifications of the Canon T3i: An 18 megapixel CMOS sensor capable of shooting photos at 5184×3456 pixels.Photographing both RAW and jpeg images simultaneously.Capturing full HD video (1920×1080 at 30p/25p/24p), or standard HD video (1280×720 at 60p/50p.)A built-in flash.A flip-out LCD viewfinder screen.Both automatic as well as professional modes for controlling exposure. Basic setup.