Research Question: What psychological impact does a routine exercise regimen have on people with mental disorders?

Exercising to relax. Rest and relaxation. 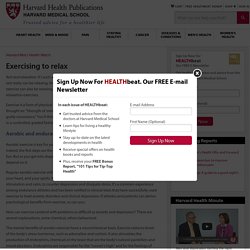 It’s such a common expression that it has become a clich. And although rest really can be relaxing, the pat phrase causes many men to overlook the fact that exercise can also be relaxing. It’s true for most forms of physical activity as well as for specific relaxation exercises. Exercise and Mental Health....The Missing Link? The benefits of exercise have been explored for decades. 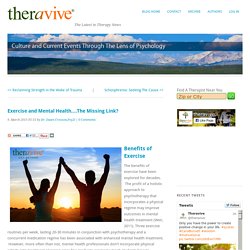 Very few graduate programs teach students how to implement physical exercise into treatment. Would adding exercise to treatment planning provide the missing link to more positive outcomes in therapy? Exercise is often the primary step in lifestyle modifications for the prevention and management of chronic diseases (Anderson, Shivakumar, 2013). Depression and anxiety are among the most frequently treated mental health disorders across the nation. The exercise effect. When Jennifer Carter, PhD, counsels patients, she often suggests they walk as they talk. 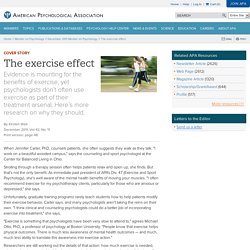 "I work on a beautiful wooded campus," says the counseling and sport psychologist at the Center for Balanced Living in Ohio. Strolling through a therapy session often helps patients relax and open up, she finds. But that's not the only benefit. As immediate past president of APA's Div. 47 (Exercise and Sport Psychology), she's well aware of the mental health benefits of moving your muscles. "I often recommend exercise for my psychotherapy clients, particularly for those who are anxious or depressed," she says. Unfortunately, graduate training programs rarely teach students how to help patients modify their exercise behavior, Carter says, and many psychologists aren't taking the reins on their own.

"Exercise is something that psychologists have been very slow to attend to," agrees Michael Otto, PhD, a professor of psychology at Boston University. Mood enhancement Fight-or-flight Buffering the brain. Exercise for mental health: a no brainer? - Health & Wellbeing. By Cathy Johnson The physical health benefits of exercise are well researched and understood. 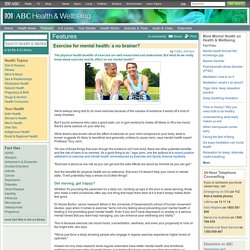 But what do we really know about exercise and its effect on our mental health? [Image source: iStockPhoto | Kurhan] We're always being told to do more exercise because of the masses of evidence it wards off a host of nasty illnesses. But if you're someone who uses a good walk, run or gym workout to shake off stress or lift a low mood, there's some science on your side too. While there's less known about the effect of exercise on your mind compared to your body, what is known suggests it's likely to beneficial and generally unlikely to cause harm, says mental health expert Professor Tony Jorm. 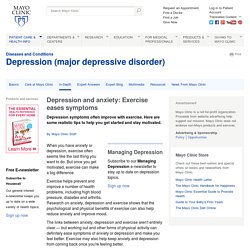 Here are some realistic tips to help you get started and stay motivated.By Mayo Clinic Staff When you have anxiety or depression, exercise often seems like the last thing you want to do. Effects of physical exercise on anxiety, depression, and sensitivity to stress: A unifying theory. Abstract Until recently, claims for the psychological benefits of physical exercise have tended to precede supportive evidence. 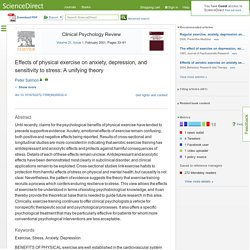 Acutely, emotional effects of exercise remain confusing, both positive and negative effects being reported. Results of cross-sectional and longitudinal studies are more consistent in indicating that aerobic exercise training has antidepressant and anxiolytic effects and protects against harmful consequences of stress. Details of each of these effects remain unclear. Antidepressant and anxiolytic effects have been demonstrated most clearly in subclinical disorder, and clinical applications remain to be exploited. Keywords. Exercise therapy and mental health in clinical populations: is exercise therapy a worthwhile intervention? There is widespread support for a positive and lasting relationship between participation in regular exercise and various indices of mental health, and several consensus documents and reviews (e.g. 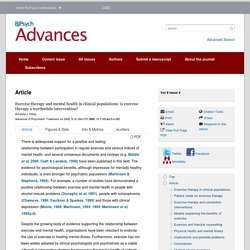 Biddle et al, 2000; Craft & Landers, 1998) have been published in this field. The evidence for psychological benefits, although impressive for mentally healthy individuals, is even stronger for psychiatric populations (Martinsen & Stephens, 1994). For example, a number of studies have demonstrated a positive relationship between exercise and mental health in people with alcohol misuse problems (Donaghy et al, 1991), people with schizophrenia (Chamove, 1986; Faulkner & Sparkes, 1999) and those with clinical depression (Mutrie, 1988; Martinsen, 1993; 1994; Martinsen et al, 1989a,b).