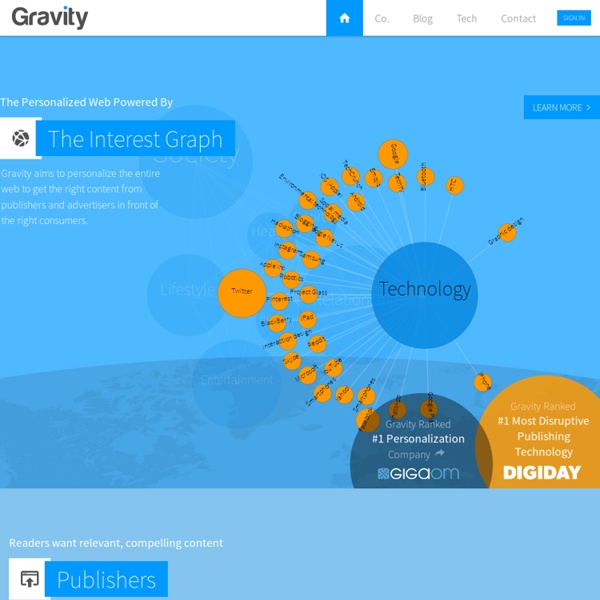 How the Big Banks stack up on Facebook, Twitter Social media is gaining traction in the financial services industry. Even the big banks are showing an eagerness to explore Web 2.0 technologies. Here, FierceFinance presents the social media activity of some of the major players on Wall Street. Hover over the various data points to see how each bank stacks up. Visualisation of Ontologies and Large Scale Graphs For a whole number of reasons, I am currently looking into the visualisation of large-scale graphs and ontologies and to that end, I have made some notes concerning tools and concepts which might be useful for others. Here they are: Visualisation by Node-Link and Tree jOWL: jQuery Plugin for the navigation and visualisation of OWL ontologies and RDFS documents. Visualisations mainly as trees, navigation bars. OntoViz: Plugin into Protege…at the moment supports Protege 3.4 and doesn’t seem to work with Protege 4.

Social Media Analytics Oracle Social Cloud is a cloud service that helps you manage and scale your relationship with customers on social media channels. Oracle has integrated the best-in-class social relationship management (SRM) components - social listening, social engagement, social publishing, social content & apps, and social analytics - into one unified cloud service to give you the most complete SRM solution on the market. Why Oracle?

Blog Cambridge, Mass. – March 4, 2011 – Via Science announced the acquisition of Dataspora, a predictive analytics firm that helps companies solve complex big data problems. The acquisition helps strengthen Via Science’s positioning to support the consumer packaged goods and retail sectors, areas of focus for Dataspora. REFS™ provides the ability to leverage causal mathematics at scale with its supercomputing platform. This allows decision-makers to make better use of data with mathematical models that can diagnose problems or predict future outcomes.

ChronoZoom: A Timeline for Big History Video from The 2012 R. Lowry Dobson Memorial Lecture featuring Walter Alvarez, Big History and ChronoZoom now online! ChronoZoom 2 beta in HTML5 has arrived!Please visit www.ChronoZoomProject.org/ to try it now. Peyote Lophophora williamsii /loʊˈfɒfərə wɪlˈjæmsiaɪ/ is a small, spineless cactus with psychoactive alkaloids, particularly mescaline.[2] The Spanish common name, also used in English, is peyote[3] (/pəˈjoʊti/; from the Nahuatl word peyōtl [ˈpejoːt͡ɬ]), which means "glisten" or "glistening".[4] [5] Native North Americans are likely to have used peyote, often for spiritual purposes for at least 5,500 years.[6] Peyote is native to southwestern Texas and Mexico. It is found primarily in the Chihuahuan desert and in the states of Coahuila, Nuevo León, Tamaulipas and San Luis Potosi among scrub, especially where there is limestone. Description[edit]

untitled With Viber, everyone in the world can connect. Freely. More than 516b million Viber users text, make HD-quality phone and video calls, and send photo and video messages worldwide over Wifi or 3G - for free.* Viber Out can be used to make calls to non-Viber mobile and landline numbers at low rates. Viber is available for many smartphones and platforms. Viber is compatible with and optimized for Android tablets! Cogito semantic technology Cogito for intelligence The Cogito semantic technology The material analyzed through the intelligence process is mostly unstructured: communications, conversations, data, news, etc., and rarely has an organized form, such as a database structure. As a consequence, the activities of analysis and processing can be highly resource consuming, and prone to error. The work of analysts and knowledge workers remains essential, and technology cannot fully replace it (and never will).

45 Powerful CSS/JavaScript-Techniques - Smashing Magazine Advertisement CSS and JavaScript are extremely powerful tools for designers and developers. However, sometimes it’s difficult to come up with the one excellent idea that would solve a problem that you are facing right now. Good news: almost every day designers and developers come up with fresh and clever CSS tricks and techniques and share them with other developers online. Infographics old and new: top data visualisations, in pictures There is an infographic boom going on out there - with the internet flooded with data visualisations of the way we fight war, how we use Twitter, what music we like and how we use the, er, internet. But new as these are, there's a long tradition of telling stories using graphics. Guardian definitive atlas of UK government spending

Why Americans Are the Weirdest People in the World IN THE SUMMER of 1995, a young graduate student in anthropology at UCLA named Joe Henrich traveled to Peru to carry out some fieldwork among the Machiguenga, an indigenous people who live north of Machu Picchu in the Amazon basin. The Machiguenga had traditionally been horticulturalists who lived in single-family, thatch-roofed houses in small hamlets composed of clusters of extended families. For sustenance, they relied on local game and produce from small-scale farming. They shared with their kin but rarely traded with outside groups.

Stealth Wear was exhibited at TANK Magazine HQ in London in January 2013. Presented by PRIMITIVE LONDON. Summary Collectively, Stealth Wear is a vision for fashion that addresses the rise of surveillance, the power of those who surveil, and the growing need to exert control over what we are slowly losing, our privacy. Building off previous work with CV Dazzle, camouflage from face detection, Stealth Wear continues to explore the aesthetics of privacy and the potential for fashion to challenge authoritarian surveillance.