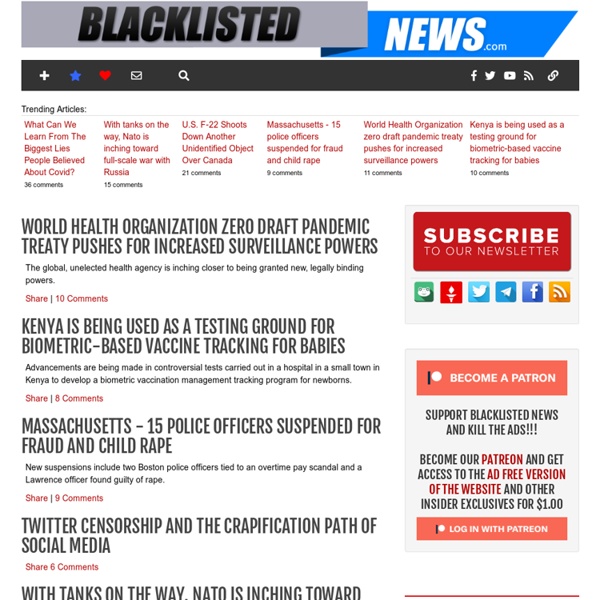 John Todd the Illuminati and witchcraft, his talk in text and audio MP3 format Image created during the Cold War! Copyright 1980 © by Jacob Sailor "We are all ignorant; just about different things." -Mark Twain "All tyranny needs to gain a foothold is for people of good conscience to remain silent." Philosophers Stone. Selected views from the boat. by Ninja Bambi I awoke this morning, pondering on the evidence I still witness and experience of the hooks, barbs and velcro that remain deep in our flesh, or which just snag at our clothing from time to time. I see these various forms of hooks as representing some aspect of the control system, the Matrix. Unfiltered News "Hello Mr. Griffin, Thank you from the bottom of my heart for these news updates and for the huge service you have been doing for humanity. Your work has opened my eyes to so many agendas and continues to educate with every new post…. With sincere gratitude," – Oriana Spratt, Ashland, Oregon

Agenda 21 Agenda 21 is Sustainable Development, and was created through the United Nations. It is the blueprint for depopulation and total control, under the banner of saving the environment. It is like the head of a beast that has thousands of tentacles, originating from the United Nations. The 3 primary tools that are used are: Man-made global warmingWater shortagesEndangered Species Act We all want clean air, water, land and food, but phony environmentalism is designed to create fear in order to implement the policies of tyranny.

Headlines ‘After remaining silent for days, Nevada Sen. Harry Reid made comments regarding the ongoing dispute between the Bureau of Land Management and rancher Cliven Bundy today, accusing the Bundy family of violating the law. “Well, it’s not over. We can’t have an American people that violate the law and then just walk away from it. So it’s not over,” Reid told News 4. Despite telling the Bundy family that a deal had been reached Saturday after federal agents were forced to retreat, the BLM reversed its promise Monday and told reporters that they planned to go after Bundy “administratively and judicially.” The AGI Manhattan Project - Part 2: The AGI Panopticon On the way to school they face being monitored via microphones while riding the bus , iris scanning at the entrance , and then they're under the watchful eye of cameras and on duty police, including cameras in the restrooms and in some cases inside the actual toilets , and at lunch they might have to pay using their thumbprint. Finally, when they go home they have to worry about being recorded by camera and microphone by school issued laptops while being tracked with GPS trackers. Perhaps in a few years the system will start installing full naked body scanners into schools like are going into all of the airports. As adults we're being trained to be subjected to being frisked or filed into a naked body scanner, which are meant to become mandatory. You would never see a government official go through one of these and then post the images online, yet in the UK even children are supposed to go through them even though it violates child pornography laws .

Are we stuck in filter bubbles? Here are five potential paths out The filter bubble is a name for an anxiety — the worry that our personalized interfaces to the Internet will end up telling us only what we want to hear, hiding everything unpleasant but important. It’s a fabulous topic of debate, because it’s both significant and marvelously ill-defined. But to get beyond arguing, we’re going to need to actually do something. I have five proposals. If you’re not familiar with the filter bubble argument, start with Eli Pariser’s TED talk. The basic idea is this: All of us now depend on algorithmic personalization and recommendation, such as Google’s personalized results and the Facebook news feed which decides for us whose updates we see.

Geithner: US has 'huge stake' in Euro crisis WASHINGTON (AFP) - US Treasury Secretary Timothy Geithner said Monday that America had a huge stake in helping Europe find a "more effective strategy" to tackle its financial crisis. Geithner, just back from a trip to Poland in which he reportedly expressed concern of a "catastrophic risk" to markets from the Greek debt crisis, said at the White House that Europe had the will to combat its challenges. "We have a huge stake as a country in helping them deal with those challenges. We have a huge economic stake, financial stake.

FactCheck Audience: Small audience (10-100K) (English) Scope: National Political Viewpoint: Neutral viewpoint Owners: Annenberg Public Policy Center of the University of Pennsylvania | nonprofit_organization | Managers: Brooks Jackson, Viveca Novak, Kathleen Hall Jamieson Location: 320 National Press Building, Washington, DC, 20045, US Last Edit: Nov 17, 2007 - 2:24 PM PST This Foot-Long Box Is the Most Advanced Particle Collider in the World The CERN particle collider is 17 miles long. China just announced a supercollider that is supposed to be roughly 49 miles long. The United States' new particle collider is just under 12 inches long. What it lacks in size, it makes up for in having a bunch of plasma inside of it, allowing researchers at the SLAC National Accelerator Laboratory in Menlo Park, Calif., to accelerate particles more than 500 times faster than traditional methods. In a recent test published in Nature, Michael Litos and his team were able to accelerate bunches of electrons to near the speed of light within this tiny chamber.

The Filter Bubble Personalization algorithms already tell us what movies to watch, news stories to read and tunes to listen to. It was only a matter of time, then, that they’d tell us who to love. Matching algorithms aren’t new to online dating services. EHarmony, Chemistry and OKCupid have long served up compatible mates based on dozens, if not hundreds, of questions singles answer on their sites. But a new dating app, StreetSpark, is venturing out internet-wide to pick up clues on who you’re likely to become enamored with. Love seekers on the site can plug into their Facebook, Foursquare and Twitter accounts to discover potential lovers with similar tweets, profiles and cafe haunts.

US slams Iran at UN atomic agency meet VIENNA (AFP) - The United States took a renewed swipe at Iran Monday, telling the annual gathering of the UN atomic agency Tehran was creeping "still closer" to producing nuclear weapons-grade uranium. "Iran has continued to engage in a longstanding pattern of denial, deceit and evasion," US Energy Secretary Steven Chu told the 151-nation International Atomic Energy Association (IAEA) general conference in Vienna. He said a recent example of Iran's "provocative behaviour" was to begin installing facilities to enrich uranium, which can be used for nuclear power as well as atomic weapons, at an underground facility near Qom. "Expanding, and moving underground, its enrichment ... marks a significant provocation and brings Iran still closer to having the capacity to produce weapons grade uranium," Chu said, according to the text of his speech. Iran's atomic chief Fereydoun Abbasi Davani however dismissed Chu's claims.