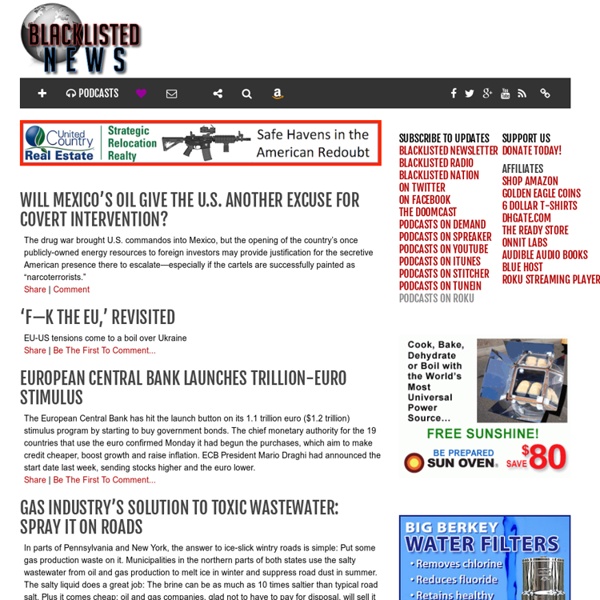 Accueil du site - SNO [le Portail du Site Non Officiel du web] rense.com One Universal Mind - The Art of Remote Viewing and Influencing World News Aux armes citoyens ! This Foot-Long Box Is the Most Advanced Particle Collider in the World The CERN particle collider is 17 miles long. China just announced a supercollider that is supposed to be roughly 49 miles long. The United States' new particle collider is just under 12 inches long. What it lacks in size, it makes up for in having a bunch of plasma inside of it, allowing researchers at the SLAC National Accelerator Laboratory in Menlo Park, Calif., to accelerate particles more than 500 times faster than traditional methods. In a recent test published in Nature, Michael Litos and his team were able to accelerate bunches of electrons to near the speed of light within this tiny chamber. "If you want to build a next generation high energy physics particle collider, there are two ways of thinking," Litos told me. First, he said, you could build them even bigger than the Large Hadron Collider or the proposed followup, Compact Linear Collider, which is supposed to be 31 miles long. "We send them in right after another. And that's the plan, at the moment.

Freemasonry Watch - Is the Devil in the details? | Freemasons News | Freemason Information Independent Media Center | ((( i ))) Actualité BlackListed News History is not black-and-white... Point to ponder: "Always forgive your enemies; nothing annoys them so much." Oscar Wilde, Irish writer and poet (1854-1900). In politics and history - two disciplines linked closely by cause-and-effect relationships - there is a mainstream school of thought which is shaped and guided by vested interests such as, for example, lobby groups and the behind-the-scenes forces whose purpose they serve. In either discipline - or in any other subject, for that matter - an incomplete understanding of more than just the officially sanctioned side prevents one from making the correct decisions and drawing informed conclusions. Obviously, where a mainstream school of thought is useful to an Establishment, any non-mainstream views are detrimental to those who benefit from the status quo. For our efforts towards making these things public, we have been accused of "racism", "Holocaust denial", "re-writing history", "hatemongering", "stretching the limits of free speech", and the list goes on.