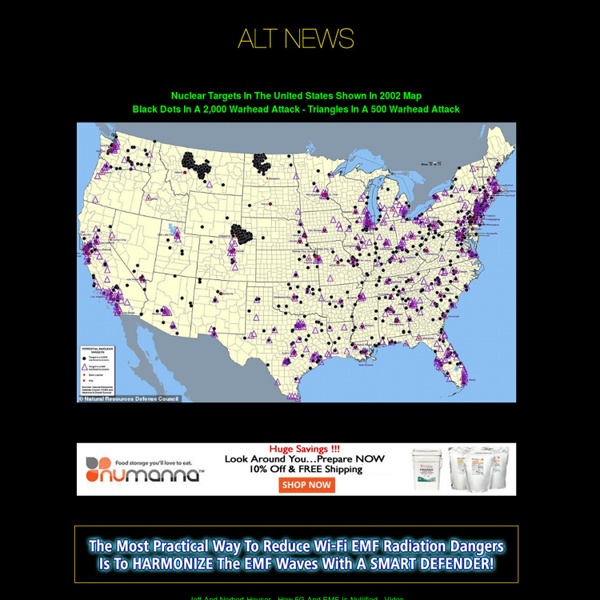 & 33 Conspiracy Theories That Turned Out To Be True, What Every Person S... - StumbleUpon New World Order Report January 6, 2010 After reading the article released by Cracked.com, I decided to update and revise their sloppy work. Their article had only 7. Jeff Rense Jeff Rense is an American radio talk-show host of the Jeff Rense Program, broadcast on US satellite radio via the Rense Radio Network and Internet radio.[1] Rense's radio program and website, Rense.com, cover subjects such as 9/11 conspiracy theories,[2] UFO reporting, paranormal phenomena, tracking of new diseases and possible resultant pandemics, environmental concerns (see chemtrails), animal rights, possible evidence of advanced ancient technology, geopolitical developments and emergent energy technologies, complementary and alternative medicine among other subjects. In addition to articles critical of Israel and Zionists, the website also carries articles which defend Iran's policies from its critics [3] and opposes anti-Iranian media bias Biographical information[edit]

Quals UK Lectures! - The UK Lectures at St. Andrews, Warwick, Cambridge and Queen Mary were a success! This Foot-Long Box Is the Most Advanced Particle Collider in the World The CERN particle collider is 17 miles long. China just announced a supercollider that is supposed to be roughly 49 miles long. The United States' new particle collider is just under 12 inches long. What it lacks in size, it makes up for in having a bunch of plasma inside of it, allowing researchers at the SLAC National Accelerator Laboratory in Menlo Park, Calif., to accelerate particles more than 500 times faster than traditional methods. In a recent test published in Nature, Michael Litos and his team were able to accelerate bunches of electrons to near the speed of light within this tiny chamber. "If you want to build a next generation high energy physics particle collider, there are two ways of thinking," Litos told me.

Iran vs Israel: What The Media Wants You To Forget "The rule of law is simply the rule of bandits who are in control of the United States." -- Eustace Mullins Screening Paid advertising at What Really Happened may not represent the views and opinions of this website and its contributors. No endorsement of products and services advertised is either expressed or implied. Iran vs Israel: What The Media Wants You To Forget By Michael Rivero Alex Jones (radio host) Alexander Emerick "Alex" Jones (born February 11, 1974) is an American radio host, author, conspiracy theorist[1][2] and documentary filmmaker.[3] His syndicated news/talk show The Alex Jones Show, based in Austin, Texas, airs via the Genesis Communication Network on more than 90 AM, FM, and shortwave radio stations across the United States and on the Internet.[4] His websites include Infowars.com and PrisonPlanet.com.[5][6] His YouTube channel has been viewed over 360 million times.[7] Biography[edit] He began his career in Austin with a live, call-in format public-access television cable TV program. In July, a group of Austin Community Access Center (ACAC) programmers claimed that Jones used legal proceedings and ACAC policy to intimidate them or get their shows thrown off the air.[25] On September 8, 2007, he was arrested while protesting at 6th Avenue and 48th Street in New York City. He was charged with operating a bullhorn without a permit.

Philosophers Stone. Selected views from the boat. by Ninja Bambi I awoke this morning, pondering on the evidence I still witness and experience of the hooks, barbs and velcro that remain deep in our flesh, or which just snag at our clothing from time to time. I see these various forms of hooks as representing some aspect of the control system, the Matrix. When we decide to break free of this control system, we encounter massive problems, in the form of the myriad of hooks, comfort hooks, safety hooks, family hooks, emotional-reaction-dependance hooks, religious hooks, nationality hooks, etc.

Psi-Tech « In Search of Black Assassins “The salvation of the state is watchfulness in the citizen” –Inscription from the Entrance of a Public Building, Omaha, NE Divine and spiritual human nature spans across ages and civilizations. One of man’s strongest and most powerful loves is one for the children. Mind Control Slavery and the New World Order Mind Control Slavery and the New World Order According to this extremely disturbing report, Monarch Program mind-control survivors claim to have been used as high-tech slaves by certain intelligence agencies and top-ranking politicians. Extracted from Nexus Magazine, Volume 6, Number 2 (February-March 1999). PO Box 30, Mapleton Qld 4560 Australia. editor@nexusmagazine.com Telephone: +61 (0)7 5442 9280; Fax: +61 (0)7 5442 9381 From our web page at: www.nexusmagazine.com

10 News Outlets Corporate Media Doesn’t Want You to Follow Aaron Nelson | The Pontiac Tribune You are not the only one who believes the corporate media works for the establishment to secure the status quo and shape false narratives — so we compiled a list of 10 independent news outlets that would prefer you think for yourself. These days most Americans have lost faith in corporate-owned media outlets because they believe the institution of press protected in the first amendment no longer represents the people of our great nation. For many, it has been challenging to replace the failed dinosaur media, which is why I’m writing this article for people seeking legitimate sources.

Fox 'News' 'Expert' Says We Must "Start Killing Russians." I Disagree. Eric Zuesse On this video from Fox ‘News': At 3:30, Lou Dobbs asks the Fox Noise military analyst: “What do you expect” in Ukraine? At 3:35 he answers: “In the Ukraine, the only way that the United States can have any effect in this region and turn the tide is to start killing Russians … killing so many Russians that even Putin’s media can’t hide the fact that Russians are returning to the motherland in body bags.” Well, anyway, there is a Republican ‘news’ operation: “Start killing Russians.” They hate Russians so much the hate practically bleeds from them, even in public.

Colorado Springs Gazette, Local News, Latest News, Breaking News Police ID, arrest Colorado Springs man in connection to 2007 sex assault A 44-year-old Colorado Springs man was arrested in connection to a sexual assault report that happened almost 10 years ago, according to police. A felony arrest warrant for Gary F. Hargraves was issued this month after additional testing completed by the Colorado Bureau of Investigation in January. Authorities in Colorado Springs were... Best and Brightest 2015: Teen known for compassion, helping friends, family This is the third of 20 profiles about The Gazette's Best and Brightest Class of 2015. In one of Kevin Sullivan's college applications, he had to write an essay about a word from a different language that couldn't be directly translated into English.