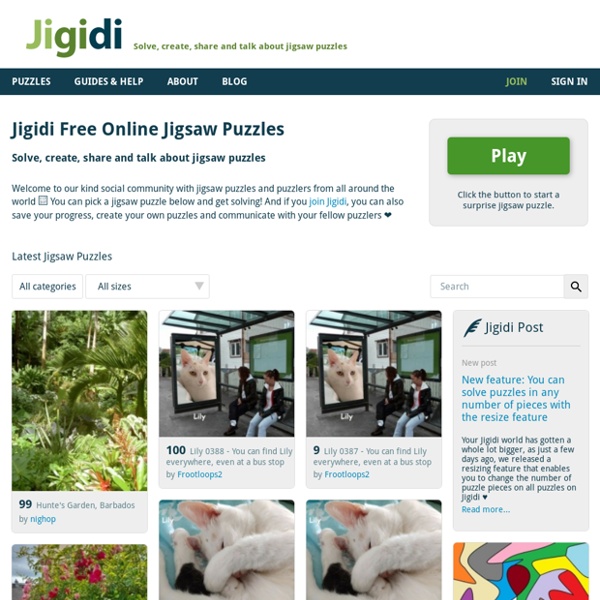 Free jigsaw puzzle games > Jigsaw Puzzle Lite Download free Jigsaw Puzzle Lite (8.6 Mb, <1 min. ) Get additional puzzle packs Find a minute. Solve a jigsaw puzzle. Whenever you're boiling at work - solve a puzzle, it'll relieve the stress. How Minecraft Can Be Used To Create A Video Game Minecraft is not only a standalone video game that creates a digital sandbox for players to play, create, design, and publish thinking, but it also can be used for a different purpose entirely–to create other video games. How is this possible? A few facts to clarify: 1.

6 Basic Benefits Of Game-Based Learning There seems to be a perception that online gaming has a detrimental impact on children’s development. Nothing could be further from the truth, and there are countless–and complex–reasons for this, but it also makes sense at the basic benefits of game-based learning. Of course children should not spend every single second of the day staring at a computer screen. About An overview of Kodu. (Click to play) Kodu lets kids create games on the PC and Xbox via a simple visual programming language. Kodu can be used to teach creativity, problem solving, storytelling, as well as programming. Anyone can use Kodu to make a game, young children as well as adults with no design or programming skills. Since Kodu's introduction in 2009, we have visited the White House, teamed up with great groups like NCWIT and DigiGirlz, inspired academic research and been the subject of a book (Kodu for Kids).

MicroWorlds EX We think our products are great! But don't just take our word for it, here's what teachers have to say... "I was first introduced to Logo about 20 years ago at the University of Nebraska. About 10 years ago when the opportunity came up to teach a 6-week exploratory class for seventh graders, I knew right away that I wanted to use MicroWorlds! Now that MicroWorlds EX is out, the students are not only experiencing computer programming at their level of expertise, but I firmly believe that MicroWorlds builds a strong foundation towards a future computer science career." Download Microsoft XNA Game Studio 4.0 from Official Microsoft Download Center <a id="b7777d05-f9ee-bedd-c9b9-9572b26f11d1" target="_self" class="mscom-link download-button dl" href="confirmation.aspx?id=23714" bi:track="false"><span class="loc" locid="46b21a80-a483-c4a8-33c6-eb40c48bcd9d" srcid="46b21a80-a483-c4a8-33c6-eb40c48bcd9d">Download</span></a> Microsoft XNA Game Studio 4.0 makes it easier than ever to create great video games for Windows-based PCs, Xbox 360 consoles, and Windows Phone Details XNA Game Studio 4.0 is a programming environment that allows you to use Visual Studio 2010 to create games for Windows Phone, the Xbox 360 console, and Windows-based computers. XNA Game Studio 4.0 includes the XNA Framework 4.0, which is a set of managed libraries designed for game development based on Microsoft .NET Framework 4.

Why Kids Should Make the Video Games They Love to Play When educator Lynn Koresh hears from kids that they want a career doing something with computers, she asks, “To do what with computers?” Adults often encourage kids to pursue science, technology, engineering and math (STEM) skills, and computing classes are usually a first stop. But Koresh knows it’s the real-world applications of computational thinking and coding language skills that bring such knowledge to life. She reasoned that most middle school students are already playing video games and might respond well to a unit on how to design, create, test and promote video games.

Making Games: The Ultimate Project-Based Learning Part 6 of MindShift’s Guide to Games and Learning. As game-based learning increases in popularity, it’s easy to get pigeon-holed into one particular way of thinking about it or one way of employing it. This is true regardless of how teachers feel about gaming in the classroom, whether they’re for or against it.