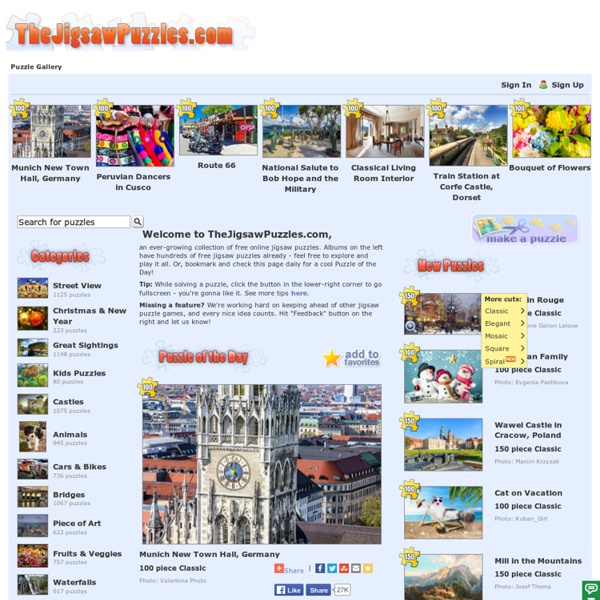 an ever-growing collection of free online jigsaw puzzles. Albums on the left have hundreds of free jigsaw puzzles already - feel free to explore and play it all. Or, bookmark and check this page daily for a cool Puzzle of the Day! Tip: While solving a puzzle, click the button in the lower-right corner to go fullscreen - you're gonna like it. See more tips here. Missing a feature?

The Most Offensive Jokes Ever What is the most offensive joke ever? Here are twenty answers to that question along with a little something extra at the end, in my list of the 20 funniest ever offensive jokes: (If you have ever been upset or offended by humor of any kind please do not read any further. This list includes racist jokes, sexist jokes, jokes about paedophilia etc). Q: What’s the difference between Santa Claus and a Jew? Chalk art by David Zinn David Zinn creates poetic chalk art in the streets of Ann Arbor. He makes his cute little characters interact with objects in the street, and the result is quite charming. Curvy in HTML5 Curvy is a HTML5 puzzle game using the canvas element. Just rotate the tiles so that like colors connect. Modernizr tells me you don't have canvas support in your browser. Sadly, this game uses technology that's only in browsers with HTML5 support. We've tested Chrome 12, Firefox 4 and Opera 11.

Department of Records - Photo Gallery The New York City Department of Records and Information Services announced the addition of 30,000 photographs to its on-line gallery. Some of the more unusual images from this series depict political groups monitored by the New York City Police Department's "Alien Squad." These photos range from Communist Party rallies in Madison Square Garden to the Nazi summer retreat in Yaphank, Long Island run by the German American Bund. See all the Alien Squad photos.

20 Images That Can’t Be Unseen Some of these will enlighten you, others will frighten you, and this one right here will ruin your childhood… via via via via via 10 Great Sites to Feed Your TV Addiction EmailEmail Have you sometimes wondered how much longer conventional TV would be useful to us? It just dawned upon me 3 days ago that was the first time I switched on the TV in 2 months! Don’t get me wrong but I do watch TV shows and movies, it’s just that not on TV. In this era of media streaming and user created content, TV pales in comparison because of:

The Levitron Revolution: Magical Floating Device The Levitron Revolution is one of the sweetest gadgets to have around the house or office. The device features EZ Float Technology which allows you to float pretty much any object you can think of mid-air as long as it weighs no more than 12 ounces. You can even slowly rotate the object in the air with this cool device. The Levitron Revolution comes with a small magnetic disc which is where you place an object weighing up to 12 ounces on so that it may float in the air. create your own country General So what is this? NationStates is a free nation simulation game. You create your own country, fashioned after your own ideals, and care for its people. Either that or you deliberately torture them. It's really up to you.

Lego domino row building machine Way back in 1985, I built my original domino row building machine out of Lego. I thought it would be neat to have some video of it to post on YouTube, but of course, the original machine was long disassembled. So this gave me reason to pull out the old Lego again and build a new domino row building machine on a visit to my parents at chrismas 2009. The set hadn't been played with since building the Lego marble machine in 1996! The new machine is an improvement on the original one. Primarily, it's more compact. Einstein Quiz The Einstein Quiz: See if you are among the top 2% of people in the world. Albert Einstein created this quiz, stating that 98% of people in the world could not solve it. You will be presented with a list of facts, followed by a list of clues that will help you reach the objective at the end of this quiz. FACTS: 1. There are 5 houses in 5 different colors 2. In each house lives a man with a different nationality. 3.

STAR WARS Characters Re-Designed as 1980s High Schoolers Artist Denis Medri has created this insanely cool series of art that re-imagines several Star Wars characters as 1980s high school teens. It's like these characters came right out of a John Hughes movie. I love all of these designs, the characters were captured perfectly, but I think Han and Chewie are my favorite. Medri is the same artist who brought us Steampunk Spider-Man and Batman Rockabilly.