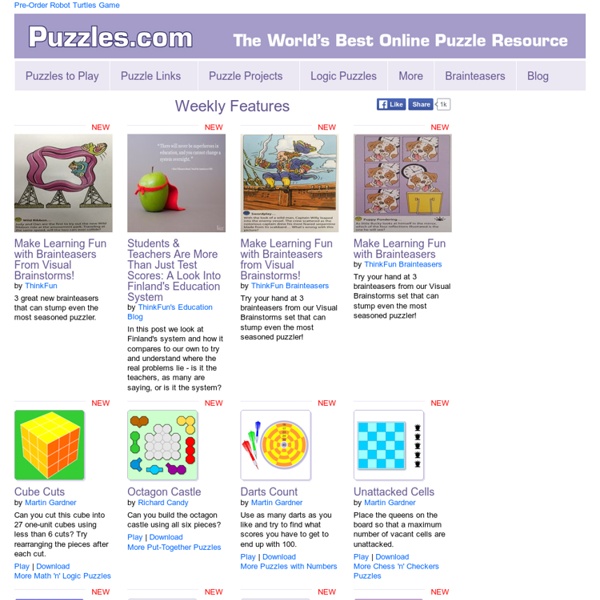 Curvy in HTML5 Curvy is a HTML5 puzzle game using the canvas element. Just rotate the tiles so that like colors connect. Modernizr tells me you don't have canvas support in your browser. Printable Logic Puzzles for Kids Logic puzzles can be tricky, but they are very beneficial because they teach critical thinking and reasoning skills. Also, who doesn't enjoy the "aha" moment when you finally figure out the answer? Solving Logic Puzzles There are three different types of logic puzzles below for you to print. To print, click on the image link which will bring up a pdf.

UFO at NFL game A large, “cigar-shaped” UFO was spotted moving very swiftly in footage aired during an NFL game, on Sunday Oct. 23 in New Orleans. It was argued in an AOL article that the craft was caused by “insects that got caught in that interlaced video as they’re flying through with a wing beat frequency, and the frames are being captured at a frequency… that causes that look,” according to a member of MUFON, and similar sentiments were expressed by a special effects expert, who also stated that he was “sure that there’s a conventional explanation,” which shows us that his mind was made up before he ever saw any footage. I have to say that, since the object goes behind the church in two of the frames of the video, it seems highly unlikely to me that such an explanation is adequate.

Free math games for kids at Fun4theBrain! Page NEW 1 2 3 View All Lucy is ready to dress the actor and actress from the lates movie, Zomie Prom! Thanks for all the help from her assisstants, Z. Scientists confirm Extraterrestrial genes in Human DNA Scientists confirm Extraterrestrial genes in Human DNA by Peter Jiang and Jenny Li Artist representation of Semjase who Exo-scientists indicate is a Pleiadian woman. Benford's law The distribution of first digits, according to Benford's law. Each bar represents a digit, and the height of the bar is the percentage of numbers that start with that digit. Frequency of first significant digit of physical constants plotted against Benford's law Benford's law, also called the first-digit law, is a phenomenological law about the frequency distribution of leading digits in many (but not all) real-life sets of numerical data. The law states that in many naturally occurring collections of numbers the small digits occur disproportionately often as leading significant digits.[1] For example, in sets which obey the law the number 1 would appear as the most significant digit about 30% of the time, while larger digits would occur in that position less frequently: 9 would appear less than 5% of the time. The graph here shows Benford's law for base 10.