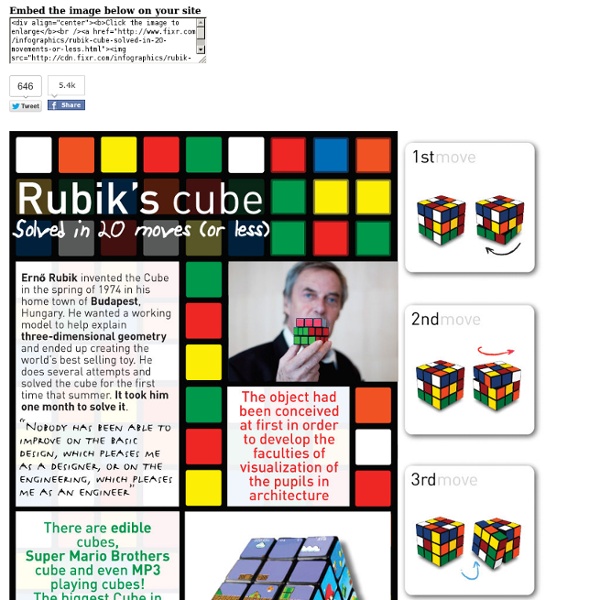 Cryptographers chosen to duke it out in final fight - physics-math - 13 December 2010 A competition to find a replacement for one of the gold-standard computer security algorithms used in almost all secure, online transactions just heated up. The list of possibilities for Secure Hash Algorithm-3, or SHA-3, has been narrowed down to five finalists. They now face the onslaught of an international community of "cryptanalysts" – who will analyse the algorithms for weaknesses – before just one is due to be selected as the winner in 2012. The competition, which is being run by the US National Institute of Standards and Technology in Gaithersburg, Maryland, is a huge deal for cryptographers and cryptanalysts alike. "These are incredibly competitive people.

The Rubik's Cube Solution How to Solve the Rubik's Cube in Seven Steps The world's most famous puzzle, simultaneously beloved and despised for it's beautiful simple complexity, the Rubiks Cube has been frustrating gamers since Erno Rubik invented it back in 1974. Over the years many brave gamers have whole-heartedly taken up the challenge to restore a mixed Rubik's cube to it's colorful and perfect original configuration, only to find the solution lingering just out of their grasp time and time again. After spending hours and days twisting and turning the vaunted cube in vain, many resorted to removing and replacing the multi-colored facelets of the cube in a dastardly attempt to cheat the seemingly infallible logic of the cube, while others simply tossed it to the side and dubbed it impossible.

Religion no excuse for promoting scientific ignorance - science-in-society - 08 February 2011 The US constitution allows people to believe what they want. However, it does not require universities to promote ignorance LAST month, the University of Kentucky in Lexington paid $125,000 to settle a religious discrimination lawsuit brought by astrophysicist Martin Gaskell. Gaskell claimed the university did not appoint him director of their student observatory because of his Christian faith, despite him being the best candidate. The settlement - which is not an admission of wrongdoing - means the suit will not come to court. While I think the university had a case, this may be the best outcome. A Brief Guide to Embodied Cognition: Why You Are Not Your Brain Embodied cognition, the idea that the mind is not only connected to the body but that the body influences the mind, is one of the more counter-intuitive ideas in cognitive science. In sharp contrast is dualism, a theory of mind famously put forth by Rene Descartes in the 17th century when he claimed that “there is a great difference between mind and body, inasmuch as body is by nature always divisible, and the mind is entirely indivisible... the mind or soul of man is entirely different from the body.” In the proceeding centuries, the notion of the disembodied mind flourished. From it, western thought developed two basic ideas: reason is disembodied because the mind is disembodied and reason is transcendent and universal. However, as George Lakoff and Rafeal Núñez explain: Cognitive science calls this entire philosophical worldview into serious question on empirical grounds...

A Klingon Christmas Carol It had to happen at some point. The first play to ever be produced in the language of the Klingons, A Klingon Christmas Carol began its performances in Chicago recently. Scrooge of course is the central character and to begin with, he has no honor and no courage. Short but tricky management ability test The following short quiz consists of 4 questions and tells whether you are qualified to be a “manager.” The questions are not that difficult. How do you put a giraffe into a refrigerator? The correct answer is: Open the refrigerator, put in the giraffe and close the door.This question tests whether you tend to do simple things in an overly complicated way.How do you put an elephant into a refrigerator? Wrong Answer : Open the refrigerator, put in the elephant and close the refrigerator. Correct Answer : Open the refrigerator, take out the giraffe, put in the elephant and close the door.This tests your ability to think through the repercussions of your actions.The Lion King is hosting an animal conference, all the animals attend except one.