App Review: Tantrix Strategy connects luck and strategy. The beautiful Tantrix Strategy game app [US$2.99] is an example of why it's sometimes good to wait for the second or third version of an iPad app before plunking down your money in the App Store. 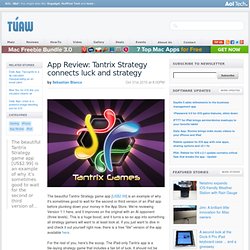 We're reviewing Version 1.1 here, and it improves on the original with an AI opponent (three levels). This is a huge boost, and it turns a so-so app into something all strategy gamers will want to at least look at. If you just want to dive in and check it out yourself right now, there is a free "lite" version of the app available here. For the rest of you, here's the scoop. The iPad-only Tantrix app is a tile-laying strategy game that includes a fair bit of luck. Rubik's Cube Combinations. Hanayama Equa Puzzle Solution (assembly) Hanayama Equa Puzzle Solution (assembly) Hanayama Cast Equa DETAILED Solution. Hive at Boardspace.net. Hive is a boardless board game played with Hex tiles. 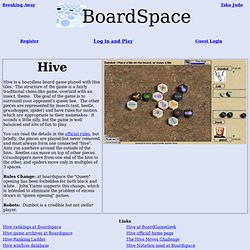 The structure of the game is a fairly traditional chess-like game, overlaid with an insect. theme. The goal of the game is to surround your opponent's queen bee. The other pieces are represented by insects (ant, beetle, grasshopper, spider) and have rules for motion which are appropriate to their namesakes.

It sounds a little silly, but the game is well balanced and lots of fun to play. You can read the details in the official rules, but briefly; the pieces are played but never removed, and must always form one connected "hive". Rules Change: at boardspace the "Queen" opening has been forbidden for both black and white. Robots: Dumbot is a credible but not stellar player. Math Run - Mathgame - how fast are your Math skills? A simple Math Training Game for everyone.

Rubik's Triamid. This puzzle is a triangular pyramid of 10 odd shaped coloured pieces (actually they are truncated rhombic dodecahedra) which are held together using 4 small cubical connectors. 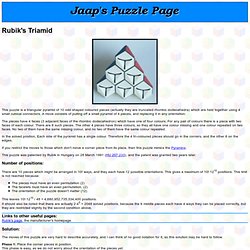 A move consists of pulling off a small pyramid of 4 pieces, and replacing it in any orientation. The pieces have 4 faces (3 adjacent faces of the rhombic dodecahedron) which have one of four colours. For any pair of colours there is a piece with two faces of each colour. There are 6 such pieces. The other 4 pieces have three colours, so they all have one colour missing and one colour repeated on two faces. In the solved position, Each side of the pyramid has a single colour. If you restrict the moves to those which don't move a corner piece from its place, then this puzzle mimics the Pyraminx. This puzzle was patented by Rubik in Hungary on 28 March 1991 (HU 207,233), and the patent was granted two years later. Number of positions: There are 10 pieces which might be arranged in 10! This leaves 10! Solution: 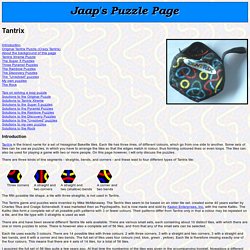 Each tile has three lines, of different colours, which go from one side to another. Some sets of tiles can be use as puzzles, in which you have to arrange the tiles so that the edges match in colour, thus forming coloured lines or even loops. There are three kinds of line segments - straights, bends, and corners - and these lead to four different types of Tantrix tile: Three corners 1. 2. The web's premier multiplayer game. Jaap's Puzzle Page. UPDATED31/12/2014. 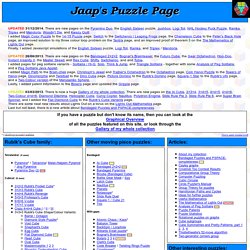 There are new pages on the Pyraminx Duo, the English Sixteen puzzle, Jushbox, Logi Toli, NHL Hockey Puck Puzzle, Ramka, Triplex and Mandorla, Woodn't Die, and Kwazy Quilt. I added Magic Color Puzzle to the 14-15 Puzzle page, Switch to the Switcheroo / Leaping Frogs page, the Chameleon Cube to the Peter's Black Hole page, an improved solution to my three colour loop problem on the Tantrix page, and an improved proof of theorem 3 on the The Mathematics of Lights Out page.

Finally, I added Javascript simulations of the English Sixteen puzzle, Logi Toli, Ramka, and Triplex / Mandorla. UPDATED 26/06/2013. There are new pages on the Bandaged 2×2×2, Bognar's Brainteaser, the Futuro Cube, the Gear Octahedron, Hoo-Doo, Instant Insanity II, the Master Skewb and Rex Cube, Shifty, Switcheroo, and and Tubie. UPDATED 03/03/2013. These pages and scripts are written by Jaap Scherphuis, © Copyright 1999-2015.

Related:  Math Run - Mathgame - how fast are your Math skills? A simple Math Training Game for everyone   -  Education   -  Enterprise