Jigsaw full-year trading breaks £100m barrier for the first time. Jigsaw to return to Ireland. After pulling out of the Ireland almost eight years ago, Jigsaw is looking to make its re-enter the market. 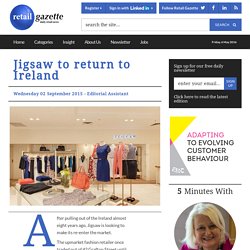 The upmarket fashion retailer once traded out of 42 Grafton Street until 2007 when it opted to sell its lease at the height of the property boom to fashion chain Ted Baker for a premium of more than €1.4m. Now that property values and rents have returned to a more realistic level, Jigsaw will be returning shortly with a new retail outlet in the Grafton Building on South Anne Street in Dublin city centre. The company is fitting out a new 860sq ft store for which it will pay rent of about €100,000 per annum. Neighbouring traders will include TM Lewin and Timberland. Jigsaw’s journey to omnichannel. Jigsaw has almost completed an omnichannel journey which saw the retailer tie up existing channels while standing by the brand’s beliefs and heritage. 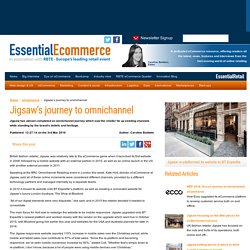 British fashion retailer, Jigsaw, was relatively late to the eCommerce game when it launched its first website in 2008, followed by a mobile website with an external partner in 2010, as well as an online launch in the US with another external provider in 2011. Speaking at the BRC Omnichannel Retailing event in London this week, Kate Holt, director of eCommerce at Jigsaw, said all of these online increments were considered different channels, provided by a different technology partners and managed internally by a separate teams. In 2012 it moved its website onto BT Expedite’s platform, as well as creating a connected website for Jigsaw’s luxury London boutique, The Shop at Bluebird.

“All of our digital elements were very disparate,” she said, and in 2015 the retailer decided it needed to consolidate. Jigsaw signs up to £400m West End scheme. Why it's worth rediscovering Jigsaw right now. Switzerland is key piece in the puzzle for Jigsaw expansion. Fashion alumni collaborate with Jigsaw - Arts University Bournemouth. BA (Hons) Fashion alumni Camilla Sutton and Holly Dutton, founders of The Basket Room, have collaborated with Jigsaw to launch SS16 collection. 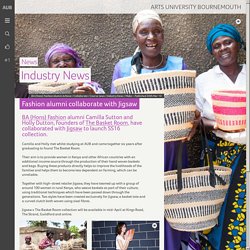 Camilla and Holly met whilst studying at AUB and came together six years after graduating to found The Basket Room. Their aim is to provide women in Kenya and other African countries with an additional income source through the production of their hand woven baskets and bags. Buying these products directly helps to improve the livelihoods of the families and helps them to become less dependent on farming, which can be unreliable.

Together with high-street retailer Jigsaw, they have teamed up with a group of around 100 women in rural Kenya, who weave baskets as part of their culture, using traditional techniques which have been passed down through the generations. Two styles have been created exclusively for Jigsaw, a basket tote and a curved clutch both woven using sisal fibres. Marlborough News Online - Jigsaw fashion stores to sponsor Sally Randell Racing at Broad Hinton. Sally Randell Racing has signed an authorised sponsorship deal with the international fashion chain Jigsaw. 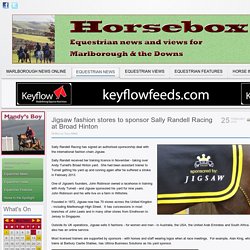 Sally Randell received her training licence in November - taking over Andy Turnell's Broad Hinton yard. She had been assistant trainer to Turnell getting his yard up and running again after he suffered a stroke in February 2013. One of Jigsaw's founders, John Robinson owned a racehorse in training with Andy Turnell - and Jigsaw sponsored his yard for nine years. 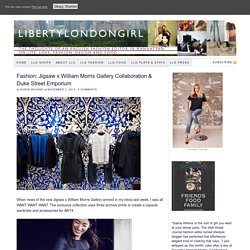 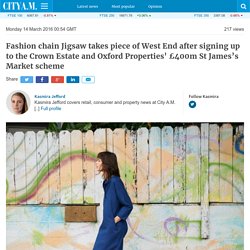 The fashion chain will open a 3,000 square feet shop last this year joining Swedish cycling brand Assos, Smeg and office tenants such as private equity Carlyle Group. Jigsaw's so-called Emporium will include 1,000 sq ft for its sister brand, The Shop at Bluebird as well as both its menswear and womenswear collections. The Crown Estate signed a £320m joint venture with Oxford Properties, the Canadian real estate company, in 2013 to transform two historic blocks near the Haymarket district into 210,000 sq ft of office space, five flagship stores and over half an acre of public space.

Jigsaw chief executive, Peter Ruis, said: “St James’s Market is the natural home for our new bespoke Emporium, located in this iconic part of London synonymous with British style, craftsmanship and luxury. Jigsaw enjoys strong sales as it raises its fashion credentials. Jigsaw is back in fashion and has posted a 7 per cent sales jump and profit of £1.5m on turnover of £64.2m. 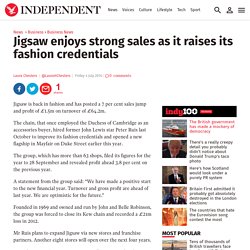 The chain, that once employed the Duchess of Cambridge as an accessories buyer, hired former John Lewis star Peter Ruis last October to improve its fashion credentials and opened a new flagship in Mayfair on Duke Street earlier this year. The group, which has more than 63 shops, filed its figures for the year to 28 September and revealed profit ahead 3.8 per cent on the previous year. A statement from the group said: “We have made a positive start to the new financial year. Turnover and gross profit are ahead of last year. How Jigsaw got its mojo back. Jigsaw returning to Irish market after almost eight years. Almost eight years after pulling out of the Irish market, the high quality fashion retailer Jigsaw will be returning shortly with a new retail outlet at South Anne Street in Dublin city centre. 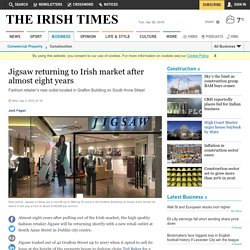 Jigsaw traded out of 42 Grafton Street up to 2007 when it opted to sell its lease at the height of the property boom to fashion chain Ted Baker for a premium of more than €1.4 million. Now that property values and rents have returned to a more realistic level, the company is fitting out a new 80 sq m (860 sq ft) store in the Grafton Building on South Anne Street for which it will pay a rent of about €100,000 per annum. Neighbouring traders will include TM Lewin and Timberland. Jigsaw was named UK retailer of the year 2014 with a turnover of more than £70 million from stores in the UK, USA, UAE, Australia and South Africa. Fashion group Jigsaw boosts Christmas sales. 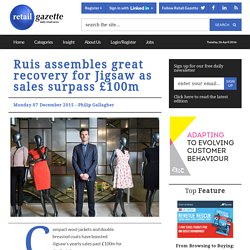 In the year to October, sales grew to £104.9m. Like for like sales rose by 12.3% year on year, whilst underlying earnings almost tripled to £5.4m. This marks the end of the second full year under Peter Ruis, who became CEO of the upmarket retailer in September 2013. Formerly an Executive and Buying Director at John Lewis, Ruis said he was “pretty chuffed” at the results. “We were up on the year before, trading at full price…” Indeed, the retailer’s prices stayed at “full price” even during the Black Friday shopping weekend as, according to Jigsaw, its clothes “stand for something.” Ruis was appointed to the chain two years after the parent company Robinson Webster Holdings posted pre-tax losses of over £21.2m. Jigsaw owners in talks to sell. Jigsaw update: Since publication of this article Jigsaw have informed us that the article in The Sunday Times is wholly inaccurate and CEO Peter Ruis issued the following statement: "Jigsaw has not started any formal process around a possible future sale and there has been no appointment of an adviser. 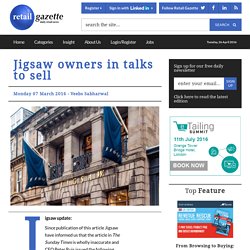 We have stated, on the record, that at some point we may seek a sale, but that moment is not now. " Jigsaw UK takes control of Australian operations with re-launch of five stores - SmartCompany. The UK parent company of clothing retailer Jigsaw has taken control of the Jigsaw brand in Australia, 25 years after Jigsaw Australia was established. The Australian arm of the global clothing brand was established by Jigsaw co-founder Malcolm Webster in 1991 and until recently his company, Webster Holdings, operated as many as 17 retail outlets across the country under a license from Jigsaw UK. All Australian Jigsaw stores closed at the start of February, with five locations in Sydney, Canberra, Adelaide and Melbourne now operating again under the new ownership arrangements in time for the release of Jigsaw’s global Autumn/Winter 2016 collection. The remaining 12 locations in Victoria, New South Wales, Queensland, South Australia and Western Australia have either already closed or will cease trading this month.

Jigsaw shrugs off the winter gloom with rise in Christmas sales. Peter Ruis, chief executive, said that the strong trading was testament to the retailer’s decision not to discount on Black Friday and focus on quality products. Instead, Jigsaw began offering discounts online on the afternoon of Christmas Eve. Mr Ruis also took a swipe at complaints that warmer temperatures were impacting demand, saying: “Britain has had a warm winter for the last four or five years, you can’t complain - you just have to get on with it.

But knowing trading might be weaker makes it all the more barmy to participate in Black Friday”. Jigsaw, which continues to be owned by the founding Robinson family after four decades, opened seven stores last year and has plans to open another ten this year, taking its total across the country to 85. Earlier this year Jigsaw annual sales passed £100m for the first time, after a 12.3pc like-for-like sales growth. Larger fashion rivals Next and Marks & Spencer will update investors on their Christmas trading this week. The high street does cater for grown-ups - but you have to hunt it out. Editor's Comment: Are CCOs the chief executives of the future?

Taking to Twitter on the day, attendees revealed some of their highlights, including an amusing and engaging interview with Simon Berwin, managing director of Leeds-based suit manufacturer Berwin & Berwin, who spoke about his career in the tailoring industry and emphasised its importance in the industry today. In his own words: “A suit is the equivalent of a women’s handbag – where else would men put things without so many pockets?” How Jigsaw got its mojo back.

‘Lived not modelled’ challenges the fashion industry by celebrating that clothes are to be lived in, rather than staged on a catwalk or heavily directed photo shoot. Clothing brand Jigsaw denies sale speculation.