Some paradoxes - an anthology 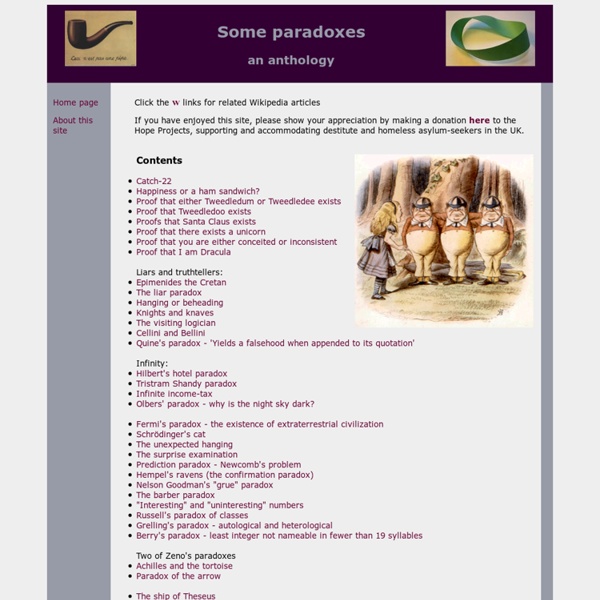 Click the W links for related Wikipedia articles If you have enjoyed this site, please show your appreciation by making a donation here to the Hope Projects, supporting and accommodating destitute and homeless asylum-seekers in the UK. Catch-22 There was only one catch and that was Catch-22, which specified that concern for one's own safety in the face of dangers that were real and immediate was the process of a rational mind. Orr was crazy and could be grounded. All he had to do was ask; and as soon as he did, he would no longer be crazy and would have to fly more missions.

Evaluating Internet Research Sources Robert Harris Version Date: October 11, 2018 Previous: August 16, 2018, December 12, 2016; January 21, 2015, December 27, 2013; November 6, 2013; Nov. 22, 2010 and June 15, 2007 "The central work of life is interpretation." --Proverb Introduction: The Diversity of Information Adopting a Skeptical (or Cautious) Attitude Lateral Thinking Puzzles Lateral thinking puzzles that challenge your preconceptions. 1. You are driving down the road in your car on a wild, stormy night, when you pass by a bus stop and you see three people waiting for the bus: 1. An old lady who looks as if she is about to die. 2.

Do blind people hallucinate on LSD? I’ve just found a remarkable 1963 study [pdf] from the Archives of Opthalmology in which 24 blind participants took LSD to see if they could experience visual hallucinations. It turns out, they can, although this seems largely to be the case in blind people who had several years of sight to begin with, but who later lost their vision. Those blind from a very early age (younger than two years-old) did not report visual hallucinations, probably because they never had enough visual experience to shape a fully-functioning visual system when their brain was still developing. It is evident that a normal retina is not needed for the occurrence of LSD-induced visual experiences. 1920's Slang - Camarilla Wiki Welcome to White-Wolf.com. White Wolf Publishing has produced gaming universes for over 20 years including World of Darkness, Exalted, Trinity, and many more. White Wolf merged with CCP Games to focus on translating the World of Darkness IP into a massively multiplayer experience, and the North American office is fully dedicated to making this evolution a reality. In order to continue to support our existing RPG and LARP communities, we have entered into a number of partnerships with individuals and groups who can focus their full attention on the art forms White Wolf created and lived in. Digital Publishing and Print On Demand

Critical Thinking Model 1 To Analyze Thinking We Must Identify and Question its Elemental Structures Standard: Clarityunderstandable, the meaning can be grasped Could you elaborate further? Could you give me an example? 8 Things About Concentrating “Music helps me concentrate,” Mike said to me glancing briefly over his shoulder. Mike was in his room writing a paper for his U.S. History class.

Kurt Vonnegut at the Blackboard Voices in Time I want to share with you something I’ve learned. I’ll draw it on the blackboard behind me so you can follow more easily [draws a vertical line on the blackboard]. Nine Things Successful People Do Differently - Heidi Grant Halvorson Learn more about the science of success with Heidi Grant Halvorson’s HBR Single, based on this blog post. Why have you been so successful in reaching some of your goals, but not others? If you aren’t sure, you are far from alone in your confusion. It turns out that even brilliant, highly accomplished people are pretty lousy when it comes to understanding why they succeed or fail. Reasoning Resources While people generally think of an argument as a fight, perhaps involving the hurling of small appliances, this is not the case-at least as the term is used in philosophy. In philosophy, an argument is a set of claims, one of which is supposed to be supported by the others. There are two types of claims in an argument.

The size of my problem thermometer We all encounter problems routinely. Some of them are caused by our own mistakes, such as sleeping through the alarm or missing a meeting. Some are caused by others, (a stolen wallet) and some are just bad luck (getting stuck in a traffic jam)! Just about everything we do throughout the day involves solving some kind of problem; it’s just an unavoidable fact of life. What we can do, however, is learn to manage our problems. This involves, in part, managing the emotions that arise when a problem occurs.

Hell: Exothermic or Endothermic? 1, April 28, 2010 by jonathanturley This answer to a college chemistry exam was sent to me recently and restores my faith in the new generation of college students. The answer was purportedly in response to the bonus question on a University of Arizona chemistry midterm: “Is Hell exothermic (gives off heat) or endothermic (absorbs heat)?” Here is the student’s answer: