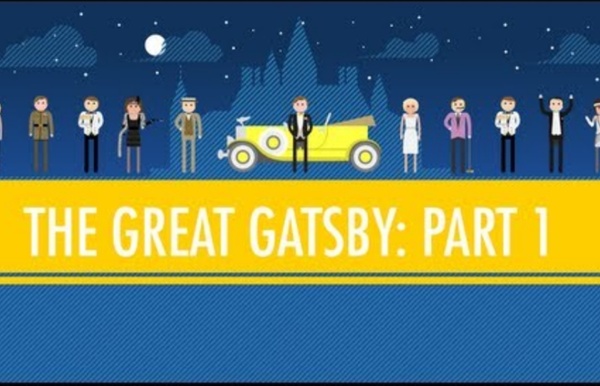 Teaching 'The Great Gatsby' With The New York Times Update | April 25, 2013 We now have an all-new version of this post, updated for the new movie with teaching ideas as well as both the resources below and many new ones. Find it here. A few years ago, Adam Cohen noted on the Opinion page that Jay Gatsby was at the top of a list of the 100 best fictional characters since 1900. He went on to discuss how and why Gatsby – the “cynical idealist, who embodies America in all its messy glory” – is still relevant, perhaps more than ever. Do your students still relate to Gatsby? We offer these resources on, and related to, F. Lesson Plans Student Crossword Puzzles Times Topics Resources From NYTimes.com From the Archives: Scott Fitzgerald Looks Into Middle Age Original 1925 Times review of “The Great Gatsby” (PDF).Scott Fitzgerald, Author, Dies at 44 The Times’s obituary on F. On Class and Wealth: What Happens to the American Dream in a Recession? On “Gatsby” Characters: On the Novel’s Setting: On the Fitzgeralds: On Adaptations:

The Great Gatsby Want more deets? We've also got a complete Online Course about The Great Gatsby, with three weeks worth of readings and activities to make sure you know your stuff. Let's play a game called Free Association. Cool? If you're looking at that list and thinking, Sweet! The problem is, author F. Do we smell a Twilight-esque love triangle approaching? And that's not the only reason why Gatsby still feels fresh today. In both cases, though, unsustainable boom times led to devastating crashes with profound cultural consequences. And while Gatsby is a work of fiction, Fitzgerald's real life contains some suspicious similarities. The Great Gatsby is swaddled in Fitzgerald's simultaneous embrace of and disdain for 1920s luxury. Mmmmm…intrigue. The Great Gatsby is a delightful concoction of Real Housewives, a never-ending Academy Awards after-party, and HBO's Sopranos. The one thing all these shows and Gatsby have in common is the notion of the American Dream. So there you have it.

The Grammar of History Textbooks, Part I: Language Analysis Why do it? Do your students groan that the textbook is boring or difficult? Do they say it contains too many facts and not enough explanation? It may be that they are unfamiliar with the academic language that history textbooks use. Academic language differs from everyday language. It uses abstract words and complicated sentence structures. Getting Meaning Through Language Analysis is a strategy that linguists Mary Schleppergrell and her colleagues developed while working with middle school and high school history teachers and students. What is it? Analyzing a short passage, students identify all verbs and place them in one of three categories. action verbs such as fight, defend, build, vote, and so forthsaying and thinking-feeling verbs such as said, expressed, suppose, like, resent, and so forthrelating verbs such as is, have, is called, and so forth In addition to categorizing verbs, students identify all participants (that is, the subjects and objects of the verbs). Resources Mary J.

101 Short Stories that Will Leave You Smiling, Crying and Thinking post written by: Marc Chernoff Email Since its inception eighteen months ago, our sister site Makes Me Think (MMT) has truly evolved into a remarkable online community. As stated on the MMT About page, sometimes the most random everyday encounters force us to stop and rethink the truths and perceptions we have ingrained in our minds. I believe the 101 stories listed below perfectly fulfill that description. What do you think? www.thedustyshelf.com/1-6/gatsby.php Return to Current Issue A Lesson in Superficiality: Teaching The Great Gatsby in High School by Rance King It is considered a rite of passage. Read The Great Gatsby and discuss the parallels of the '20s and today. So how can one justify teaching a novel written in the '20s about the '20s? Before I ask my students to read The Great Gatsby, I ask them to consider the values of American society. Fitzgerald, being the visionary that he was, saw this almost 100 years ago. When Gatsby begins throwing his shirts into the air for Daisy to marvel at, we see ourselves blindly using our possessions to define ourselves, Yes, they are beautiful. In addition to media manipulation, celebrity is another concept that students can explore in The Great Gatsby. In addition, the concept of time is one that students can explore during the reading of The Great Gatsby. So is The Great Gatsby worth teaching today?

F. Scott Fitzgerald – The Great Gatsby (Chapter III) | Genius There was music from my neighbor’s house through the summer nights. In his blue gardens men and girls came and went like moths among the whisperings and the champagne and the stars. At high tide in the afternoon I watched his guests diving from the tower of his raft, or taking the sun on the hot sand of his beach while his two motor-boats slit the waters of the Sound, drawing aquaplanes over cataracts of foam. On week-ends his Rolls-Royce became an omnibus, bearing parties to and from the city between nine in the morning and long past midnight, while his station wagon scampered like a brisk yellow bug to meet all trains. eight servants , including an extra gardener, toiled all day with mops and scrubbing-brushes and hammers and garden-shears, repairing the ravages of the night before. Every Friday five crates of oranges and lemons arrived from a fruiterer in New York — every Monday these same oranges and lemons left his back door in a pyramid of pulpless halves. two hundred oranges in By seven o

The Grammar of History Textbooks Part II: Questioning the Text Why do it? History is a discipline constructed through language. For history students to be successful they must be able to comprehend, discuss, analyze, and write historical texts. Getting Meaning through Language Analysis not only helps struggling students comprehend the basic meaning of history writing, but this close text analysis can also promote historical thinking as students grapple with the language choices the author made in constructing the text. What is it? Language Analysis is a way to help students better understand and analyze historical text. These questions drive a classroom conversation about the text's meaning. 1. Let's examine the following sentence excerpted from a passage in an 8th-grade U.S. history textbook. Claiming that the nation needed protecting from treasonous ideas and actions, the Federalist-controlled Congress passed the Alien and Sedition Acts in the summer of 1798.(1) Standards-based investigative questions guide students through text interpretation. 1. 2.

How the Necronomicon Works" Weird fiction author H.P. Lovecraft created a mythology that includes bizarre monsters, troubled communities, insane scholars and a library of books filled with forbidden lore. Of all the books detailing this mythology that Lovecraft mentions in his fiction, one in particular captures the imagination more than any other: the "Necronomicon." In reality, the "Necronomicon" doesn't exist, though more than a half dozen books with the title "Necronomicon" are available at bookstores. The "Necronomicon" plays an important role in the Cthulhu mythos -- the mythology behind much of Lovecraft's work involving extraterrestrial beings of immense power. Lovecraft tells us that the author of the book was the mad Arab Abdul Alhazred, who perished in A.D. 738 after being eaten by one or more invisible monsters. So what's in this book? In other words, the book is a fictional history about our world and the creatures that eons ago ruled the Earth and other realms.

The Great Gatsby The Great Gatsby Chapter 3 Summary and Analysis Chapter Three This chapter begins with Nick's description of Gatsby's Saturday night parties: they have become legendary in New York for their opulence and hedonism. These parties are obscenely lavish. The guests marvel at Gatsby's Rolls-Royce, his enormous swimming pool, the live musicians he engages weekly, the sumptuous food that he provides for hundreds of people, and, perhaps most importantly, the unlimited liquor he generously supplies. Nick is eventually invited to one of these parties, but not by Gatsby himself; instead, Gatsby's chauffeur brings an invitation to Nick's door. Gatsby's mansion is packed with revelers when Nick arrives. Jordan and Nick go looking for Gatsby in his mansion; instead, they find a grotesque little man in enormous eyeglasses (Nick calls him "Owl Eyes") skimming through the books in Gatsby's library. At about two in the morning, Nick decides to walk home; on the way, he sees Owl Eyes, who has crashed his car into a ditch. Analysis

Prohibition - Facts & Summary In the 1820s and ’30s, a wave of religious revivalism swept the United States, leading to increased calls for temperance, as well as other “perfectionist” movements such as the abolition of slavery. In 1838, the state of Massachusetts passed a temperance law banning the sale of spirits in less than 15-gallon quantities; though the law was repealed two years later, it set a precedent for such legislation. Maine passed the first state prohibition law in 1846, and a number of other states had followed suit by the time the Civil War began in 1861. By the turn of the century, temperance societies were a common fixture in communities across the United States.

Southern Ghost Stories, Folktales, Storytelling: The Moonlit Road.com The Great Gatsby and the American dream In the New York Times earlier this year, Paul Krugman wrote of an economic effect called "The Great Gatsby curve," a graph that measures fiscal inequality against social mobility and shows that America's marked economic inequality means it has correlatively low social mobility. In one sense this hardly seems newsworthy, but it is telling that even economists think that F Scott Fitzgerald's masterpiece offers the most resonant (and economical) shorthand for the problems of social mobility, economic inequality and class antagonism that we face today. Nietzsche – whose Genealogy of Morals Fitzgerald greatly admired – called the transformation of class resentment into a moral system "ressentiment"; in America, it is increasingly called the failure of the American dream, a failure now mapped by the "Gatsby curve". "How would you place them?" she exclaimed. Suddenly she pointed to an American girl going into the water: "Perhaps she will have, some day." Wall Street crashed 10 days later.

The Great Gatsby: Summary & Analysis Chapter 3 | CliffsNotes Summary Nick's attentions again turn to Gatsby in Chapter 3. Gatsby, in the summer months, was known far and wide for the extravagant parties he threw in which "men and girls came and went like moths among the whisperings and the champagne and the stars." During the weekend, people flocked to his house for his parties, as well as to use his pool, his boats, his car, and so on. His gatherings were lavishly catered (serving two complete dinners), boasting not just a small combo of musicians, but a whole orchestra. After seeing these parties from afar, Nick is invited by Gatsby by a handwritten note to join in the festivities. Not wanting the reader to think his summer was composed merely of the three events outlined in the book's first three chapters, Nick interjects that much more happened to him, although it largely entailed working, dating casually, and dining at the Yale Club. Analysis The only person Nick encounters at the party whom he knows is Jordan Baker. Glossary