The Toolbox: a directory of useful single-page sites and apps 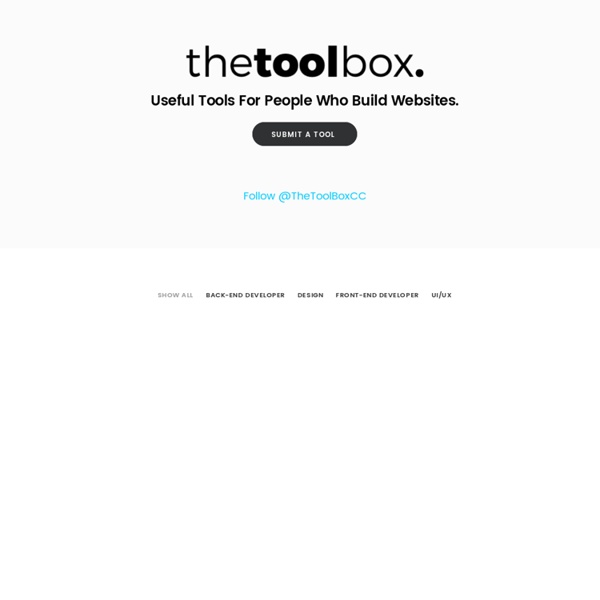 A Simple Guide to Cryptography Cryptography is an ancient mathematical science that was originally used for military communications, and designed to conceal the contents of a message should it fall into the hands of the enemy. Recent developments in cryptography have added additional uses, including mechanisms for authenticating users on a network, ensuring the integrity of transmitted information and preventing users from repudiating (i.e. rejecting ownership of) their transmitted messages. In today's world of electronic commerce on the Internet, the need for secure communications is obviously crucial. Cryptographic technologies provide enterprises with the best mechanisms of protecting their information, without putting the business at risk by exposing it on the Net. What is Encryption? The safekeeping of keys, in other words their generation, storage and exchange, is of paramount importance to ensure the security of the data. Symmetric Cryptography – Secret Keys Asymmetric Cryptography – Public/Private Keys

22 Websites that are Beautiful and Useful Here at WDL, we like to keep you inspired by showing you beautifully designed websites every week with our web design inspirational lists. Today we decided to go a different route, and instead of picking a single “theme” of examples, we gathered examples of websites that are inspiring and useful for web designers. We gathered different tools and skill sharing websites to show you so you can be inspired and also discover a nice tool/service. From free lessons to learn how to code to monthly memberships to help you to learn more about design, in this post you will find here 22 examples of inspiring and useful websites. Make sure to visit all of them, enjoy! responsify Responsify is a browser based tool, which allows you to create your own responsive template. iconmonstr Free simple icons for your next project. Lore Instructors, extend your classroom online with discussions, gradebook, and more. Codeacademy Codecademy is the easiest way to learn how to code. Skillshare Pokki Work & Turn Symbolset

[Guide] Installing BURG and Super Boot Manager in Ubuntu (inc 12.04 LTS) Quote: BURG stands for Brand-new Universal loadeR from GRUB. It's based on GRUB, and add features like new object format and configurable menu system. I found a lot of guides showing this but there was only one way to get this thing going for me! Installing BURG and Super Boot Manager edit those two super boot manager sources to look like that. ) which makes the bootloader a little tidier and you can also remove the recovery images from the boot screens as well. Changing the default OS to load I also had a problem getting it to change the default OS to load. Code: sudo gedit /etc/default/burg Look for this line around line 15: and uncommented it by removing the # GRUB_SAVEDEFAULT=true You need to run this into a terminal: grep menuentry /boot/grub/grub.cfg and make note of the Windows line. menuentry "Windows 7 (loader) (on /dev/sda1)" --class windows --class os { Then add or change this line in the burg document we're editing:: to: GRUB_DEFAULT="Windows 7 (loader) (on /dev/sda1)" Sources:

Pictures from a developer's life Yesterday I stumbled upon this collection on a Spanish blog and almost cried with laughter... So I translated it and posted here. Do you find yourself in any of these situations? :) EDIT: As I later found out, the pictures are originally from blogs The coding love (en) and Les joies du code (fr). When I show the boss that I have finally fixed this bug When the project manager enters the office When I'm deploying code to production When I try to fix a bug at 3 in the morning When my regex returned exactly what I expected When a friend of mine asks me to fix his website built with Joomla When I'm told that the module on which I have worked all the week will never be used When the code that I have not tested on dev works perfectly in production When the sales people announce they have sold our product to the customer When I apply a new CSS for the first time When sysadmin finally gives us the root access When I launch my script for the first time after several hours of development

Minecraft Script Pictures Wherein you can see nifty pictures, and read some text too. It's minecraft! Yay! The Code Go to this page if you're interested in the code, so you too can modify your Minecraft save files. Intro So, I realized that there is no combined page for the scripts I've been writing for Minecraft. The Story Beginnings Like many of you, I learned about Minecraft through a link from a blog (I think it was Three Panel Soul). The first script I wrote was a simple interface to edit .mclevel files. Next, I started on a script to convert Dwarf Fortress levels to Minecraft levels. Castles Castles! Over the course of a few weeks, I gradually upgraded the code to allow multiple levels, an offset keep, doors, gatehouses, and towers along the walls. Merging Maps During this whole process, I was becoming familiar with the Minecraft forums and the mapping community. Trees While developing the code for making castles, another thought had been growing in my mind. This is by far my most popular script. City Groundwork

YouTube Playlists for Learning Programming YouTube has been very good platform for learning any thing. Earlier you have seen 400+ courses on YouTube and 130+ NPTEL courses. There are few more courses especially about computer programming. thenewboston: thenewboston is a great youtube channel, has more than 2o playlists covering topics Python, C, Java, iPhone development and web programming like HTML, CSS, PHP. Xoax.net Xoax has more than 200 videos but mainly focuses on C++. PHPacademy As the name suggests, it focuses mainly on PHP and some on MySql. There are more videos on small projects like writing your own search engine for your database, pagination, creating a rating system etc… Related posts: Get more stuff like this

Game From Scratch C++ and SFML Edition! Want to create a game using C++ and SFML? This is the perfect place to start! This tutorial series will follow the creation of a simple game in C++ from the very beginning till the end, a micro-version of the overall purpose of this site. C++ is an evolving language standard and a great many tutorials out there are horrifically outdated or just plain bad. This series is meant to be a living document, so if you have any questions on specific section, let me know and I will update accordingly! Finally, I don’t pretend to be an expert on C++ nor SFML, so if you see a mistake or you disagree with something I have said, let me know. Alright, lets get this started. EDIT: This tutorial was written a couple years ago and targets Visual Studio 2010. The Introduction In this section we have an overview of what this project is going to involve as well as a list of programs and libraries you are going to need to follow along. Part 1 Part 2 Code, we finally start to code. Part 3 Part 4 Part 5 Part 6 Part 7

The Absolute Minimum Every Software Developer Absolutely, Positively Must Know About Unicode and Character Sets (No Excuses!) by Joel Spolsky Wednesday, October 08, 2003 Ever wonder about that mysterious Content-Type tag? Did you ever get an email from your friends in Bulgaria with the subject line "???? I've been dismayed to discover just how many software developers aren't really completely up to speed on the mysterious world of character sets, encodings, Unicode, all that stuff. But it won't. So I have an announcement to make: if you are a programmer working in 2003 and you don't know the basics of characters, character sets, encodings, and Unicode, and I catch you, I'm going to punish you by making you peel onions for 6 months in a submarine. And one more thing: In this article I'll fill you in on exactly what every working programmer should know. Before I get started, I should warn you that if you are one of those rare people who knows about internationalization, you are going to find my entire discussion a little bit oversimplified. A Historical Perspective Unicode OK, so say we have a string: Hello Encodings