The Jig Is Up: Time to Get Past Facebook and Invent a New Future - Alexis Madrigal - Technology 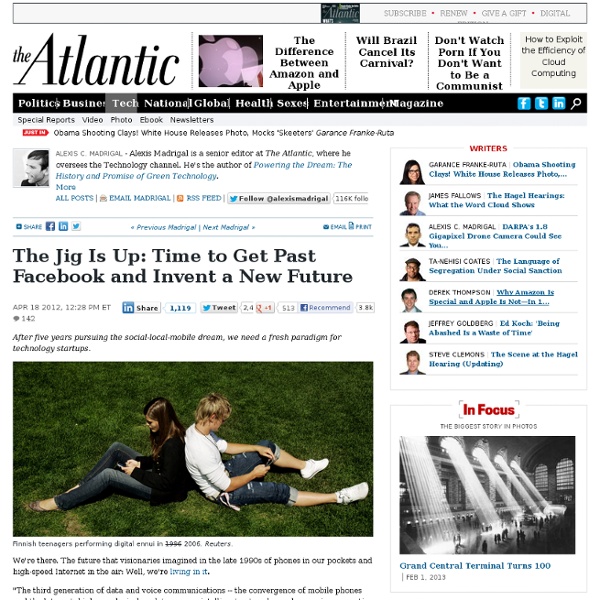 After five years pursuing the social-local-mobile dream, we need a fresh paradigm for technology startups. Finnish teenagers performing digital ennui in 1996 2006. Reuters. We're there. The future that visionaries imagined in the late 1990s of phones in our pockets and high-speed Internet in the air: Well, we're living in it. "The third generation of data and voice communications -- the convergence of mobile phones and the Internet, high-speed wireless data access, intelligent networks, and pervasive computing -- will shape how we work, shop, pay bills, flirt, keep appointments, conduct wars, keep up with our children, and write poetry in the next century." That's Steve Silberman reporting for Wired in 1999, which was 13 years ago, if you're keeping count. The question is, as it has always been: now what? Decades ago, the answer was, "Build the Internet." What we've seen since have been evolutionary improvements on the patterns established five years ago. That paradigm has run its course.

Google Drive: Why you’re a sucker if you pay for online file storage Photograph by Google. Rumors that Google would get into the online storage game have been swirling longer than some of its rivals have been in business. The first bit of evidence appeared online in 2004, the year Mark Zuckerberg launched Facebook. Entrepreneurs '13 : Speakers Teneshia Jackson Warner’s life story has been one of perseverance, diligence, risk-taking and inspiration. Her motto “It’s not enough to follow your dreams, we must chase them”, is a theme that is weaved throughout the impressive career that Teneshia has built over a decade spanning multicultural marketing, project management and inspirational life coaching. Teneshia began her career as a mentee of the globally successful innovator, entrepreneur and hip-hop Mogul, Russell Simmons. For five years under Russell’s leadership, Teneshia gained valuable experience as the as General Manager of Rush Communications. Inspired and encouraged by Russell, Teneshia embarked upon her own entrepreneurial path, and founded her own marketing firm, Egami Consulting Group (Egami).

The Future of the Internet Advertisement “In only a few short years, electronic computing systems have been invented and improved at a tremendous rate. But computers did not ‘just grow.’ They have evolved… They were born and they are being improved as a consequence of man’s ingenuity, his imagination… and his mathematics.” — 1958 IBM brochure The Reason Silicon Valley Hasn't Built a Good Health App - Kanyi Maqubela Homogenous teams of innovators make products for people just like them. And that's a problem. Many great innovators build what they know, for who they know. Aaron Sorkin caricatured this concept with his treatment of the Facebook story: Mark Zuckerberg (Jesse Eisenberg) built an online social network drawing from his own experiences and social network in real life. With consumer web products, given how young the industry is, domain expertise rarely refers to years of experience. An expert might be someone who has loved internet technology since childhood, tinkering with Javascript and LED displays after school.

Things a Real Man Doesn't Do Discover how to NATURALLY increase your testosterone levels and... Dramatically increase your ability to burn fat & build muscle.Feel younger, stronger, and increase your sex drive.Break down the barrier stopping you from building your ideal body. Is Facebook Making Us Lonely? - Magazine Yvette Vickers, a former Playboy playmate and B-movie star, best known for her role in Attack of the 50 Foot Woman, would have been 83 last August, but nobody knows exactly how old she was when she died. According to the Los Angeles coroner’s report, she lay dead for the better part of a year before a neighbor and fellow actress, a woman named Susan Savage, noticed cobwebs and yellowing letters in her mailbox, reached through a broken window to unlock the door, and pushed her way through the piles of junk mail and mounds of clothing that barricaded the house. Upstairs, she found Vickers’s body, mummified, near a heater that was still running. Her computer was on too, its glow permeating the empty space. The Los Angeles Times posted a story headlined “Mummified Body of Former Playboy Playmate Yvette Vickers Found in Her Benedict Canyon Home,” which quickly went viral. Also see:

The Next, and Overlooked, VC Opportunity: The Middle East - Christopher M. Schroeder by Christopher M. Schroeder | 9:00 AM April 17, 2013 Venture capital is ignoring the Middle East for all the wrong reasons. Ultimately, playing it safe will cause them to yield new opportunities. The Imminent Takeover of Web 3.0? Social media has literally started a revolution when it comes to advertising online or working on website promotion. There are so many affordable search engine optimization companies that can help you develop a killer social media plan that will help you establish ongoing communications with your customers, building your customer base and exploding your profits. The key is to balance out your regular SEO tactics with social media, and have the best of both worlds.

The bar for success in our industry is too low by Jason Fried of 37signals This weekend the New York Times published a piece called Using ‘Free’ to Turn a Profit. The piece focused on Evernote, a web-based and smart-phone based application for taking notes, snapping pictures, and storing stuff you want to remember later. The following critique isn’t about Evernote (it’s an impressive product which a lot of people love). It’s about the incredibly low bar for “success” in our industry and how the tech-business press perpetuates the perception. Gospel of John The Gospel of John (also referred to as the Gospel According to John, the Fourth Gospel, or simply John) is one of the four canonical gospels in the Christian Bible. In the New Testament it traditionally appears fourth, after the synoptic gospels of Matthew, Mark and Luke. John begins with the witness and affirmation of John the Baptist and concludes with the death, burial, resurrection, and post-resurrection appearances of Jesus. Chapter 21 states that the book derives from the testimony of the "disciple whom Jesus loved" and early church tradition identified him as John the Apostle, one of Jesus' Twelve Apostles.

Why Groupon is poised for collapse Groupon was forced to restate fourth quarter earnings, sending its stock down 6% in after-hours trading. This surprised me as much as my $2 investment in the Mega Millions jackpot not paying off. The reasons for Groupon’s restatement were higher refund reserves and weakness in internal controls. These are issues I’ve repeatedly discussed. How to Be Startup CEO - The Startup Guide - Building a Better World Through Entrepreneurship The iContact Team in October 2011 By Ryan Allis Being the CEO of a startup is one of the most challenging roles out there. Web 3.0 – what is it, how will it affect me and when will it arrive? As the web has developed, so have the buzzwords and terms that describe it. What feels like only yesterday, everyone was asking for a web 2.0 website, assuming that this instantly explained what they needed. What is actually described was a style of functionality that encouraged sharing and interaction. Although it wasn’t named as such, there was also a stage of web now referred to as web 1.0.