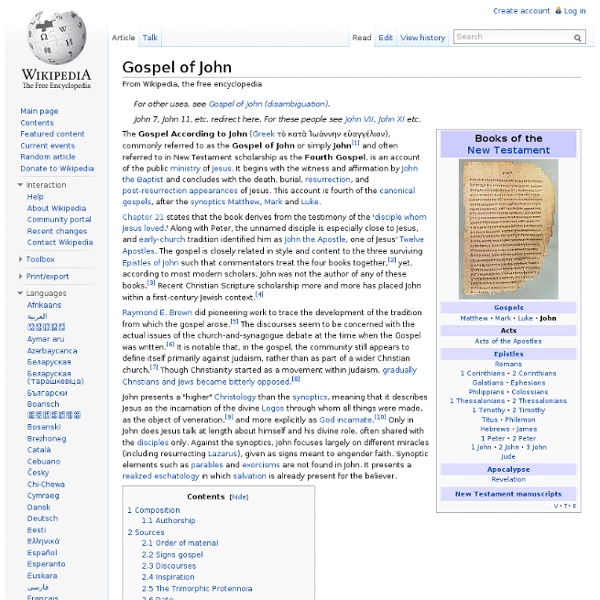 The Gospel of John (also referred to as the Gospel According to John, the Fourth Gospel, or simply John) is one of the four canonical gospels in the Christian Bible. In the New Testament it traditionally appears fourth, after the synoptic gospels of Matthew, Mark and Luke. John begins with the witness and affirmation of John the Baptist and concludes with the death, burial, resurrection, and post-resurrection appearances of Jesus. Chapter 21 states that the book derives from the testimony of the "disciple whom Jesus loved" and early church tradition identified him as John the Apostle, one of Jesus' Twelve Apostles. The gospel is closely related in style and content to the three surviving Epistles of John such that commentators treat the four books,[1] along with the Book of Revelation, as a single body of Johannine literature. According to most modern scholars, however, the apostle John was not the author of any of these books.[2] Raymond E. Composition[edit] Authorship[edit] Sources[edit]

The Corinthians in Corinthians Figure Analysis The Corinthians sure get lots of screen time in the Bible, but just who were they? And why does Paul spend so much time writing letters to their little neck of the woods? The Corinth of Old Ancient Corinth was a lovely little town, which was located in the southern part of Greece on the Isthmus of Corinth. The city was surrounded by water and was snuggled up about halfway between Athens and Sparta. See, Corinth was pretty cosmopolitan at the time (for a place that didn't have flushing toilets, that is): Corinth was home to major seaports, which meant its exports of bronze and terra cotta always sold well.It was a major manufacturing and commercial hub of the ancient world. Paul's Arrival in Greece So Paul hits Corinth and establishes a church pretty quickly. Not quite. Sin's Really Got a Hold on Them The Corinthians get a bad wrap for being a bunch of ancient sinners and sex freaks. What terrible, awful, no good Christians! Were They Really That Bad? Head of the Social Class

Bible History & Archaeology Published by the Biblical Archaeology Society | Biblical Archaeology Review Gospel A gospel is an account that describes the life of Jesus of Nazareth . The most widely known examples are the four canonical gospels of Matthew , Mark , Luke , and John , but the term is also used to refer to the apocryphal gospels , the non-canonical gospels , the Jewish-Christian gospels and the gnostic gospels . Christianity traditionally places a high value on the four canonical gospels, which it considers to be a revelation from God and central to its belief system. [ 1 ] Christians teach that the four canonical gospels are an accurate and authoritative representation of the life of Jesus, [ 2 ] but many scholars agree that not everything contained in the gospels is historically reliable. [ 3 ] [ 4 ] [ 5 ] [ 6 ] [ 7 ] [ 8 ] [ 9 ] In Islam the Injil ( Arabic : إنجيل ‎) is the Arabic term for a book given to Jesus. Injil is sometimes translated as 'gospel'. This is one of the four Islamic holy books that the Qur'an reports as having been revealed by God . Etymology [ edit ]

50 Kick-Ass Websites You Need to Know About It's time to update the entries in your browser's links toolbar. But with recent estimates putting the size of the internet at well more than 100 million distinct websites, it's getting harder and harder to get a handle on all the great stuff that's out there. That's why we've compiled this list. And unlike some lists you may have seen, which try to name the very "best" websites, but end up just telling you a lot of stuff you already know, we've chosen instead to highlight 50 of our favorite sites that fly under most people's radar. You might have heard of some of these sites, but we'll bet you haven't heard of all them. Demoscene.tv See What Can Be Done with 4 Kilobytes If you’re any kind of nerd at all, you probably know about the demoscene, where talented programmers create complex videos rendered in real-time, stored in incredibly small files. But what if you just want to see what all the fuss is about without actually downloading and running an executable? lite.Facebook.com

Apostle (Christian) The Twelve Apostles are the twelve primary disciples of Jesus Christ, and they were his closest followers and the primary teachers of the gospel message of Jesus. The count of twelve is ambiguous, as described below. Any subsequent teacher who spread the Christian message to a people, country, or nation, may also have been recognized as an apostle to that people. The commissioning of the Twelve Apostles during the ministry of Jesus is recorded in the Synoptic Gospels. After his resurrection, Jesus sent eleven of them (minus Judas Iscariot) by the Great Commission to spread his teachings to all nations, referred to as the Dispersion of the Apostles. There is also an Eastern Christian tradition derived from the Gospel of Luke of Seventy Apostles. The period of Early Christianity during the lifetimes of the apostles is called the Apostolic Age.[1] In the 2nd century, association with the apostles was esteemed as evidence of authority and such churches are known as Apostolic Sees.