Dreamland: What Happens While You Sleep and How It Affects Your Every Waking Moment 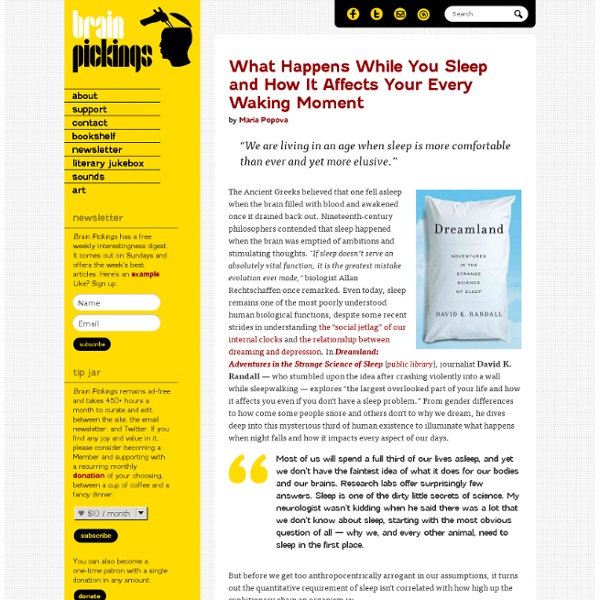 by Maria Popova “We are living in an age when sleep is more comfortable than ever and yet more elusive.” The Ancient Greeks believed that one fell asleep when the brain filled with blood and awakened once it drained back out. Nineteenth-century philosophers contended that sleep happened when the brain was emptied of ambitions and stimulating thoughts. “If sleep doesn’t serve an absolutely vital function, it is the greatest mistake evolution ever made,” biologist Allan Rechtschaffen once remarked. Even today, sleep remains one of the most poorly understood human biological functions, despite some recent strides in understanding the “social jetlag” of our internal clocks and the relationship between dreaming and depression. Most of us will spend a full third of our lives asleep, and yet we don’t have the faintest idea of what it does for our bodies and our brains. Lions and gerbils sleep about thirteen hours a day. What, then, happens as we doze off, exactly? Donating = Loving

Design Firm Attempts To Create Floating Islands To Save Locals From Flooding The Maldivian government has signed a deal with Dutch Docklands International, an architecture firm that specializes in floating developments and infrastructures, to build artificial islands that will be able to rise along with the sea level. The Republic of Maldives is a nation made up of 1,192 islands in the Indian Ocean. It’s also the lowest country in the world (the highest natural point tops out around 8 ft above sea level), which makes them great destinations for tourists looking for a short walk to a tropical beach. But the locals, more than 300,000 people across 200 inhabited islands, have a rising concern: because of climate change the rising oceans may leave them homeless before the next century. Most artificial islands are made by drawing sand up from the seabed and projecting it from a boat into a pile in the desired location. The first structures to be built will be a golf course and a series of private luxury islands formed into a loose archipelago arrangement.

Working Out Doesn't Just Make You Stronger, It Makes You Smarter We already know the facts: Our country is in the midst of an obesity epidemic. Few American adults exercise enough, and that poor lifestyle choice is getting handed down to our children, who are getting fat at record levels. And all that obesity is affecting our health, causing heart disease, diabetes, and untold other health consequences. But what if the effects aren’t only physical? This new infographic, from OnlineCollegeCourses.com points out that exercise has some great benefits for not just how our body works, but how our brains work, too. First, let’s review the facts. So what? This applies to adults, as well. The lesson? See the full infographic here or see it below, if you’re not too busy at the gym:

The Science of Sleep: Dreaming, Depression, and How REM Sleep Regulates Negative Emotions by Maria Popova “Memory is never a precise duplicate of the original… it is a continuing act of creation. Dream images are the product of that creation.” For the past half-century, sleep researcher Rosalind D. One particularly fascinating aspect of her research deals with dreaming as a mechanism for regulating negative emotion and the relationship between REM sleep and depression: The more severe the depression, the earlier the first REM begins. But what has perplexed researchers is that when these depressed patients are awakened 5 minutes into the first REM sleep episode, they’re unable to explain what they are experiencing. Brain imaging technology has helped to shed light on this mystery. Cartwright spent nearly three decades investigating “how a mood disorder that affects cognition, motivation, and most of all the emotional state during waking shows itself in dreams.” This brings us to the regulatory purpose of dreaming. Donating = Loving Brain Pickings has a free weekly newsletter.

An Illustrated Infographic Of Every Single Mission To Mars Just a few weeks ago, we were celebrating one of the greatest technological achievements in human history: the arrival of Curiosity rover on the surface of Mars. One could argue that it’s right up there with the moonwalk of recently departed Neil Armstrong in terms of the awe it inspires. But keep in mind that this is by no means our first mission to Mars. Click to enlarge. This illustrated infographic by National Post Graphics charts every man-made vessel we’ve sent toward Mars, from a slew of unsuccessful Russian efforts in the early 1960s to Mariner 4's historic 1964 fly-by and taking us right up to present day. Let’s hope the coming years and decades bring with them more missions, more data, and a more expansive consciousness--all in the name of a better understanding of our place in the universe. Click here for a full-size version.

Why America Needs More Robotic Parking - Commute Add another item to the list of infrastructure in which the United States lags: robotic parking. As common in Asia and Europe as streetlights, parking that automatically stores and retrieves cars is only now catching on in American cities. More primitive elevator-style parking has been around since the mid–20th century, but advanced automatic garages are more like three-dimensional chessboards: hydraulic pallets and computerized shelving park up to 250 cars per hour, with 32 cars in motion at any time. The cube in Birmingham, England. "If you have high-density development, it makes sense to have high-density parking," says Donald C. The number of robo-parking spaces in the United States is estimated at 3,000, whereas China has installed 170,000 structures with multiple spaces per structure. A model of robotic parking, courtesy Robotic Parking Sullivan says she sees it as another tool for developers seeking approval for city-friendly projects. Safety Concerns Robert R. Photo credit: S.

7 Superfoods to Boost Energy Levels Now | Slideshow image credit: Photos from Shutterstock.com You've pulled an all-nighter – again -- and now you're dragging. But you can't afford to take a break from your intense schedule, if you want to keep growing your business. So, consider fueling up with so-called "super foods" to keep your energy up and stress level down. In email interviews, we turned to celebrated experts, including Drs. Why it's so special: This fish contains high levels of omega 3 fatty acids, linked to decreased rates of heart disease. How it helps energize you: Salmon is a good source of protein, which can help improve your alertness and performance. Why it's so special: These nuts are packed with fiber, protein and healthy fat to fill you up and curb cravings. How it helps energize you: Almonds prevent spikes in blood sugar and insulin, which means fewer highs and lows while you're working. Why it's so special: Green tea is loaded with antioxidants and catechins, compounds that may help reduce the risk of heart disease.

The Higgs Boson, a Blip That Speaks of Our Place in the Universe REVELATION A computer-generated image shows a typical proton collision of the kind that produced evidence of a particle thought to be the Higgs boson. The “,” proposed almost 50 years ago to allow for consistency between theoretical predictions and experimental observations in elementary particle physics, appears to have been discovered — even as the detailed nature of the discovery allows room for even more exotic revelations that may be just around the corner. It is natural for those not deeply involved in the half-century quest for the Higgs to ask why they should care about this seemingly esoteric discovery. There are three reasons. First, it caps one of the most remarkable intellectual adventures in human history — one that anyone interested in the progress of knowledge should at least be aware of. And finally, the effort to uncover this tiny particle represents the very best of what the process of science can offer to modern civilization. Dr.

Jellyfish-mimicking device could snatch cancer cells right out of the bloodstream Catch and Release: Marine Animals Inspire Researchers to Invent a Device that can Detect, Capture and Release Rare Cancer Cells BOSTON, MA-A research team at Brigham and Women's Hospital has developed a novel device that may one day have broad therapeutic and diagnostic uses in the detection and capture of rare cell types, such as cancer cells, fetal cells, viruses and bacteria. The device is inspired by the long, elegant appendages of sea creatures, such as jellyfish and sea cucumbers. The study will be published online on November 12, 2012 in Proceedings of the National Academy of Sciences. The device, a microchip, is inspired by a jellyfish's long, sticky tentacles that are used to capture miniscule food flowing in the water. In this study, Karp and his team tested the chip using a DNA sequence that had a specific affinity to a cell-surface protein found abundantly in human cancer cells. "The chip we have developed is highly sensitive.