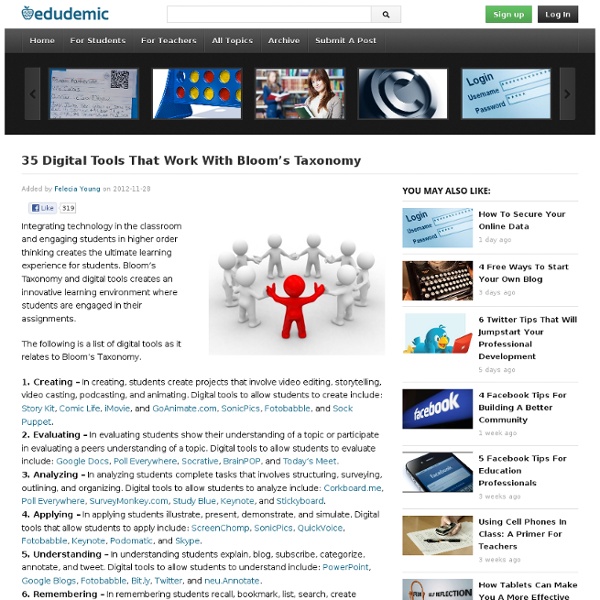 New Padagogy Wheel Helps You Integrate Technology Using SAMR Model Sometimes a visual guide comes along and it just makes total sense. That’s how I felt about Allan Carrington’s clever ‘Padagogy Wheel‘ which we featured on Edudemic last week. Check out the previous version then view the one below to see the differences. From what I can tell, putting the wheel on this site has generated a bit of buzz and I’m glad we could help spread the knowledge. But I was quite amazed this morning when I saw that the Padagogy Wheel had been updated. This new Padagogy Wheel (which honestly is less about iPads and more about technology integration now) should encourage you to focus on redefining your current standards, the current role tech plays in your classroom, and just about everything else. Want to print out the poster? The Padagogy Wheel by Allan Carrington is licensed under a Creative Commons Attribution 3.0 Unported License. Do you ever wonder how schools, universities, colleges, and large groups in general should use social media?

Allan's Blog Fourni par Traduction DOWNLOAD THE LATEST VERSION: V4 published Mar 2015. This PDF Poster has links to 122 of the latest and most popular educational apps. V4.0 was published in March 2015 but I knew I was onto something useful when I first put the Padagogy Wheel together in July 2012. So why the need for Version 2.0? We need to have transformation at the core of what we do: If it is all about the students, where do you start with curriculum and/or teaching design – surely it is with what do you want your graduates to look like? Technology integration into the fabric of learning and teaching: is where we should be heading with all we do as teachers. Finally, can you help with V3.0? Please join in the conversation with your ideas and comments using the comments area of this blog. The Padagogy Wheel by Allan Carrington is licensed under a Creative Commons Attribution 3.0 Unported License.

What are Model-Eliciting Activities? Model-eliciting activities (MEAs) are activities that encourage students to invent and test models. They are posed as open-ended problems that are designed to challenge students to build models in order to solve complex, real-world problems. The six essential principles of MEAs are listed at the end of this section. MEAs are created to look like authentic, real-world statistical problems and require students to work in teams of 3-4 students. While many statistics instructors, particularly at the introductory level, use one or more traditional types of student activities in their classes, these activities are typically quite different than MEAs (see Table 1 below). Some differences between MEAs and other types of typical in-class statistical activities are shown in Table 1. Table 1: Comparison of MEA to other typical in-class activities used to teach statistics Six Principles for Model-Eliciting Activities The six essential principles for MEAs (Lesh, et al., 2000) are described below: 1.

Flip This: Bloom’s Taxonomy Should Start with Creating Teaching Strategies Chris Davis, Powerful Learning Practice LLC By Shelley Wright I think the revised Bloom’s Taxonomy is wrong. I know this statement sounds heretical in the realms of education, but I think this is something we should rethink, especially since it is so widely taught to pre-service teachers. Conceived in 1956 by a group of educators chaired by Benjamin Bloom, the taxonomy classifies skills from least to most complex. Many teachers in many classrooms spend the majority of their time in the basement of the taxonomy, never really addressing or developing the higher order thinking skills that kids need to develop. Rather than starting with knowledge, we start with creating, and eventually discern the knowledge that we need from it. The pyramid creates the impression that there is a scarcity of creativity — only those who can traverse the bottom levels and reach the summit can be creative. Here’s what I propose: we flip Bloom’s taxonomy. Creating at the Forefront Related

Mind map A mind map about educational technology A mind map is a diagram used to visually organize information. A mind map is hierarchical and shows relationships among pieces of the whole.[1] It is often created around a single concept, drawn as an image in the center of a blank page, to which associated representations of ideas such as images, words and parts of words are added. Major ideas are connected directly to the central concept, and other ideas branch out from those major ideas. Mind maps can also be drawn by hand, either as "rough notes" during a lecture, meeting or planning session, for example, or as higher quality pictures when more time is available. Origins[edit] The semantic network was developed in the late 1950s as a theory to understand human learning and developed further by Allan M. Popularisation[edit] Buzan says the idea was inspired by Alfred Korzybski's general semantics as popularized in science fiction novels, such as those of Robert A. Guidelines[edit] Uses[edit]

4 Visual Guides To Bloom's Taxonomy Apps Yesterday, we looked at an overview of the old and revised versions of Bloom’s taxonomy . We talked a little bit about categorizing current classroom activities to see which of Bloom’s objectives you’re addressing (whether intentionally or unintentionally). Today, we’re looking at some apps and web tools that address the Bloom’s taxonomy objectives – helping bring Mr. Bloom into the 21st century. There are a ton of great lists out there that showcase many (many, many) apps and digital tools that address the objectives. Rather than reinventing the wheel here, we’ll start by looking at a few lists compiled by different folks along the way. Next, we have a graphic formatted in the same way as the revised taxonomy. Next up, a visually pleasing peacock. Kathy Schrock always puts together great lists of tools that address Bloom’s – here is just one of them.

Creative Book Builder - All about apps in YOUR classroom! Creating assemble, construct, create, design, develop, formulate, write Use Creative Book Builder to have students design an eBook to educate others about a core content topic. Students could develop text, video, and audio to embed in their book. Science students could formulate a hypothesis for an independent experiment, assemble their data, then write about their results. Evaluating appraise, argue, defend, judge, select, support, value, evaluate Use Creative Book Builder in a Social Studies classroom by having students argue that a controversial historical figure is either a hero or a villain. Analyzing appraise, compare, contrast, criticize, differentiate, discriminate, distinguish, examine, experiment, question, test Use Creative Book Builder in a Language Arts classroom to compare and contrast characters by embedding a video of students giving short character monologues, and examine the credibility of characters by writing text. Applying Understanding Remembering Download File

Of Kings and Queens Chapter 15, a harry potter fanfic Disclaimer: I don't own Harry Potter. Depressing, but true. I'm leeeeeaving on a jet plane... In four hours. And I'm still packing. I want to say SO MUCH about this chapter, but if I do, then I'll just be giving everything away... Hermione walked quickly through the old hallway, trying to ignore the intimidating portraits that were glaring down at her. "Just lovely," she whispered to herself, fighting back tears. "You're not going crazy, darling," said a voice. Hermione jumped and looked around. "Keep walking," said the voice, pleasantly. Cautiously, Hermione peered in the direction of the voice and noticed a small nook where the hallway ended. "You really are as pretty as they said," came the voice as she neared the portrait. "I'm sorry but… Who's they ?" "The portraits," the woman whispered with a smile. "Draco is not smitten," Hermione said, her cheeks heating up. "That's what I said about Lucius too," shrugged the woman. "You're Narcissa Malfoy?" "I am indeed," she said. "Stars?"

Static Chapter 11, a harry potter fanfic Disclaimer: I don't own Harry Potter. Depressing, but true. To quote The Last Poison Apple: "sahjdgjhg." I think that is an excellent way of describing the previous chapter. Now, eleven chapters in and we're starting to get to the romance, not to mention an appearance from our (least?) xo Galfoy Draco woke up to the sound of someone clearing their throat. Harry, Ron, Lucius and Rose were all staring at him from the doorway of Hermione's room. "Oh," he croaked. Ron looked like he was about to blow. "Don't get your back up, Weasel," Draco said, his voice returning. Ron stomped off, and Rose followed. "Alright Malfoy, get up. Draco groaned and stood, catching a quick look at Hermione before he left the room. He brushed past his father without meeting his smug eyes and followed Harry into the spare room. "What is it, Potter?" "What's the deal, Malfoy?" Draco huffed. "I don't see why it concerns you," Draco said. Harry stared at him. "You really do like her," he gaped. "I don't think so. "So...

Chasing The Sun Chapter 5, a harry potter fanfic Last chapter was about as dark as it gets, you'll be relieved to know. "I feel like no-one ever told the truth to me About growing up and what a struggle it would be In my tangled state of mind I've been looking back to find Where I went wrong..." – Queen, 'Too Much Love Will Kill You'. It took Hermione another two days, but the idea finally came to her during a History of Magic lesson – the source of some of her best ideas, actually, despite her being the only student who ever bothered to pay attention; her brain ticked over in the background even as she took notes. Madam Pomfrey had told her a possible solution during one of their first discussions about Snape's health: 'he goes running most mornings, I believe.' After dinner she found an empty room and asked one of the portraits to ask Phineas Nigellus to speak with her, then sat impatiently until the former Headmaster arrived. "I want to ask you a couple of questions about his habits, actually." "I'm not asking you to," she retorted.

Blood is Thicker Chapter 4: Partners in Crime, a harry potter fanfic CHAPTER 4Partners in Crime Quidditch, Quidditch, Quidditch. Stupid, barmy sport. On the bright side, Malfoy was somewhere that wasn't here, so she threw herself on the sofa with a sigh of relief and kicked her feet up. She hadn't even completed her first night in peace. "Miss Granger is preoccupied at the moment, but if you need immediate assistance I'd be willing to help you." The boy only got half the hint though, and instead opted to stutter. "It is apparent you are not aware what preoccupied means. "I didn't want to bother-" "Mr. Hermione peeled an eye open when she noticed her foot was propped on something that wasn't coffee table. "Reading something secret, Malfoy? In Malfoy's favour it was well done and she wouldn't have noticed if it wasn't for her anal retentiveness about books. It was the first of October when the disappointment turned to interest. "Brushing up on your Herbology, Draco?" "They're not connected, you know. "I get it. "Well, I'm nosy. "What do you mean?" "Huh?"