Creative Book Builder - All about apps in YOUR classroom! 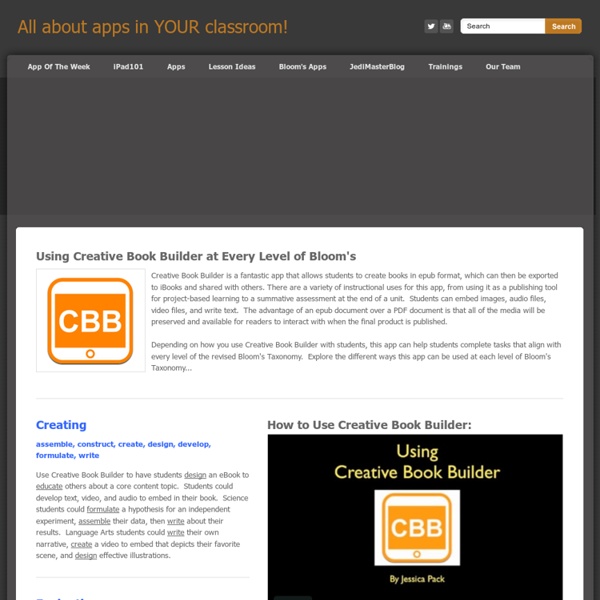 K-5 iPad Apps for Remembering: Part One of Bloom's Revised Taxonomy (Updated 10/2013) It is Benjamin Bloom's belief that the entry point to learning is the acquisition of knowledge. He postulates that a solid foundation of terms, facts, theories, and skills is the educational base that will allow the mind to evaluate information effectively and inspire innovation. Our schools' emphasis on and devotion to standards-based instruction and high-stakes testing reflects a desire for students to become proficient at memorizing terms, and facts as well as and mastering various sets of skills. Yet, we live in an age of "too much information" where facts are readily available on the mobile devices carried in our pockets. Knowledge is now accessible with just a swift swipe of a finger.

20 random iPad Maths Apps that help cover all areas of curriculum Around this time last year, I wrote a post about the lack of engaging Maths apps on the iPad that went beyond “skill and drill” number activities. Since then, developers have introduced a greater range of apps across all areas of the Maths curriculum that can be used to enhance the Maths teaching and learning in your classroom. Here’s a selection of 20 apps that cover Number and Algebra, Measurement and Geometry, and Statistics and Probability ( these are the Content strands (CS) Australia’s Mathematics curriculum has been categorized under ).

4 Visual Guides To Bloom's Taxonomy Apps Yesterday, we looked at an overview of the old and revised versions of Bloom’s taxonomy . We talked a little bit about categorizing current classroom activities to see which of Bloom’s objectives you’re addressing (whether intentionally or unintentionally). Today, we’re looking at some apps and web tools that address the Bloom’s taxonomy objectives – helping bring Mr. Bloom into the 21st century. There are a ton of great lists out there that showcase many (many, many) apps and digital tools that address the objectives. And they are by no means comprehensive, so don’t limit yourself.

iPurpose before iPad The two above images are good examples of purposeful thinking about iPad usage in schools. One, a screenshot of an oft-used tool known as iPad As.. by edtechteacher.org, focuses on what the iPad can be used for and provides links to various apps that can be utilised for those functions. It goes without saying that it is a very useful website for schools thinking about iPads. It provides nutshell explanations of a number of apps that relate to each iPad as… category as well as pricing. 8 Great iPad Apps for Creating Stop Motion Videos 1- Stop Motion Recorder StopMotion Recorder is toy video camera enable you to make stunning stop motion video like claymation. And you can edit, share movie via Mail, 'Facebook', 'Twitter (Twitvid)', Twitter(yFrog) & 'Youtube' from your iPhone. 2- Animation Creator HD

Flip This: Bloom’s Taxonomy Should Start with Creating Teaching Strategies Chris Davis, Powerful Learning Practice LLC By Shelley Wright I think the revised Bloom’s Taxonomy is wrong. I know this statement sounds heretical in the realms of education, but I think this is something we should rethink, especially since it is so widely taught to pre-service teachers. New Padagogy Wheel Helps You Integrate Technology Using SAMR Model Sometimes a visual guide comes along and it just makes total sense. That’s how I felt about Allan Carrington’s clever ‘Padagogy Wheel‘ which we featured on Edudemic last week. Check out the previous version then view the one below to see the differences. 29 Apps For Teachers: The Educator's Essential iPad Toolkit At TeachThought, we often provide lists of digital resources, and many of them are apps. Apps for struggling readers. Apps for struggling writers.

Allan's Blog Fourni par Traduction DOWNLOAD THE LATEST VERSION: V4 published Mar 2015. This PDF Poster has links to 122 of the latest and most popular educational apps. Now these resources are available in 19 different languages. The poster also has app selection criteria according to Blooms taxonomy. Bloom’s Taxonomy and iPad Apps LearningToday shares with everyone two beautiful posters, that help us remember Bloom’s Taxonomy: the Blooming Butterfly and the Blooming Orange. How do we connect the Bloom’s Taxonomy with the iPad? Following inDave Mileham and Kelly Tenkeley’s footsteps of assigning iPad apps to the different levels of the Bloom’s Taxonomy, I created the following table with apps that I have tested out and am recommending. (Click to see a larger version of the image) In order to make the cut, the app had to fulfill the criteria (from Wikipedia and according to the Blooming Orange’s verbs) set out for each level. You will notice that several apps that are in the same app category (ex. screencasting: ShowMe, ScreenChomp and ExplainEverything) are represented on different levels of the Bloom’s.

New Padagogy Wheel Helps You Integrate Technology Using SAMR Model Sometimes a visual guide comes along and it just makes total sense. That’s how I felt about Allan Carrington’s clever ‘Padagogy Wheel‘ which we featured on Edudemic last week. Check out the previous version then view the one below to see the differences. Bloom's Digital Taxonomy This is the introduction to Bloom's Digital Taxonomy. The different taxonomical levels can be viewed individually via the navigation bar or below this introduction as embedded pages. This is an update to Bloom's Revised Taxonomy which attempts to account for the new behaviours and actions emerging as technology advances and becomes more ubiquitous. Bloom's Revised Taxonomy describes many traditional classroom practices, behaviours and actions, but does not account for the new processes and actions associated with Web 2.0 technologies, infowhelm (the exponential growth in information), increasing ubiquitous personal technologies or cloud computing.Bloom's Digital Taxonomy isn't about the tools or technologies rather it is about using these to facilitate learning. Outcomes on rubrics are measured by competence of use and most importantly the quality of the process or product. For example.