Open source webmail clients for browser-based email. Gmail has enjoyed phenomenal success, and regardless of which study you choose to look at for exact numbers, there's no doubt that Gmail is towards the top of the pack when it comes to market share. 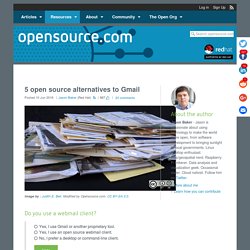 For certain circles, Gmail has become synonymous with email, or at least with webmail. Many appreciate its clean interface and the simple ability to access their inbox from anywhere. For more open source email clients, see our complete collection. Try Exercism to improve your programming skills. Many of us have a 2017 goal to improve our programming skills or to learn how to program in the first place. 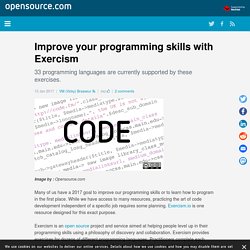 While we have access to many resources, practicing the art of code development independent of a specific job requires some planning. Exercism.io is one resource designed for this exact purpose. Exercism is an open source project and service aimed at helping people level up in their programming skills using a philosophy of discovery and collaboration. Exercism provides exercises for dozens of different programming languages. Practitioners complete each exercise and then receive feedback on their response, enabling them to learn from their peer group's experience.

Use This Tool and Scan Your IoT Devices For Vulnerabilities. The security of IoT devices is the problem the world is sure to face in the coming years. 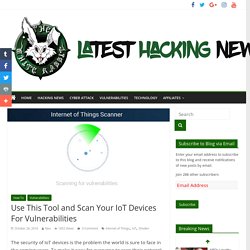 To make it easy for everyone to scan their network if IoT devices for possible vulnerabilities, a UK-based security firm BullGuard launched a very useful tool. This tool is called the Internet of Things Scanner. It was launched in early June 2016, the time everybody knew that insecure IoT devices are dangerous. 4 command-line Linux tools for working with images. Images and the command line. 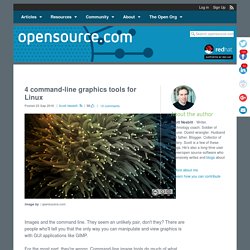 They seem an unlikely pair, don't they? There are people who'll tell you that the only way you can manipulate and view graphics is with GUI applications like GIMP. For the most part, they're wrong. Command-line image tools do much of what their GUI counterparts can, and they can do it just as well. Sometimes, especially when dealing with multiple image files or working on an older computer, command-line tools can do a better job. Let's take a look at four command-line tools that can ably handle many of your basic (and not-so-basic) image manipulation tasks. GraphicsMagick GraphicsMagick isn't a single application. GraphicsMagick supports over 88 image formats, and gives you a considerable amount of control over how you can manipulate images in those formats. The New Raspberry Pi OS Is Here, and It Looks Great.

Cramped, unpleasant and vulgar: is this the internet we planned? Laurence Dutton/Getty By Sally Adee DOES anyone remember what the internet was supposed to be? 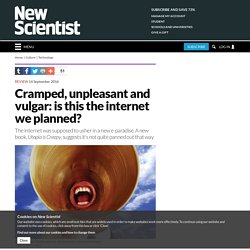 I have hazy memories of a limitless prospect, complete with William Gibson’s consensual hallucinations. Before we knew how connecting the world would play out, there was a low-res, mythical quality to our cyberspace future. Bringing Devoxx4Kids to Chicago – Devoxx4Kids USA. We all know that being a technologist requires you to be a passionate and continuous learner. 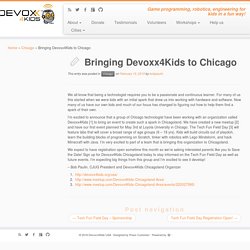 GitHut - Programming Languages and GitHub. How it works - Model the desired state of your infrastructure. Preview Puppet Explore how Puppet works in seven simple screens. 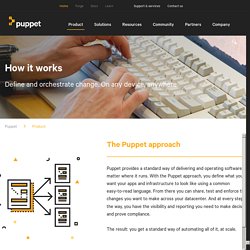 Resources Resources are the fundamental units for modeling system configurations with Puppet. Each resource describes some aspect of a system, like a service that must be running or a package that must be installed. Let’s say, for example, you want to see the current configuration of the root user. To see this in puppet code, type: puppet resource user root Puppet is describing the current state of the root user in it’s own domain specific language, or DSL.

The first line is telling us the resource type, in this case user, and that the title of this user resource is root. Containers, virtual machines, or bare metal? Which technology will you use to deploy your next big application? 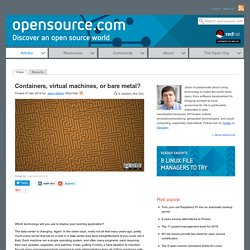 The data center is changing. Again. What is Kubernetes? Container technologies like Docker are allowing for a new approach to the way developers write and deploy applications. 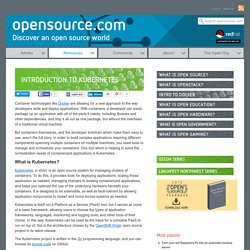 With containers, a developer can easily package up an application with all of the parts it needs, including libraries and other dependencies, and ship it all out as one package, but without the overhead of a traditional virtual machine. But containers themselves, and the developer toolchain which make them easy to use, aren’t the full story. In order to build complex applications requiring different components spanning multiple containers on multiple machines, you need tools to manage and orchestrate your containers. One tool which is helping to solve the orchestration needs of containerized applications is Kubernetes. 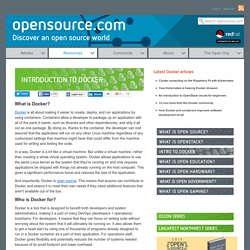 Docker is all about making it easier to create, deploy, and run applications by using containers. Build a Kubernetes cloud with Raspberry Pi. Ever wanted to make your very own cloud? Now you can! All it takes is some cheap open source hardware and open source software. For about $200, I was able to set up four Raspberry Pi 2s with the Kubernetes cloud operating system using Fabric8.

Fabric8 is an open source DevOps and integration platform that works out of the box on any Kubernetes or OpenShift environment and provides continuous delivery, management, ChatOps, and a Chaos Monkey. Kubernetes - Accelerate Your Delivery. Fabric8 - an open source developer platform.