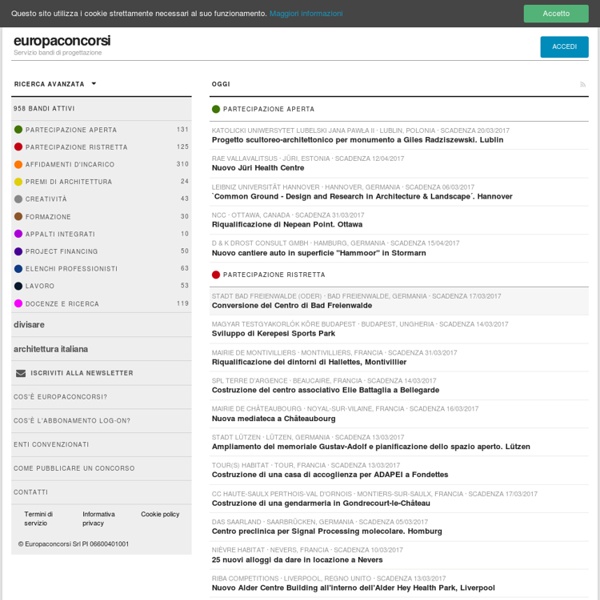 Landmak Architecture · HomeFood The project of HomeFood has been nurtured by the investor with an expectation to restore the purely natural and traditional farming methods of Vietnamese farmers. HOMEFOOD provides dishes and food cooked in line with the Macrobiotic diet and made 100% from plant-sourced, natural and organic ingredients. We have designed a restaurant based on the philosophy of HomeFood – which is renovated and expanded from part of an old building (headquarters of a state-owned company) built in the 1980s, located in a quiet and ancient quarter, and looking fairly old at the present time. In the area where there are many historical landmarks to Hanoians, the construction of any building makes local people (normally accustomed to tranquility) become curious and wonder what we are building.

Architect Day: 70F Architecture by MarceloSeferin Wed, 03/27/2013 - 10:48 Office formed in 1999 by Dutch architect Bas ten Brinke and the Swedish architect Carina Nilsson. 70f.com Bas ten Brinke was born in Amsterdam in 1972 and received his architect degree at the Technical University in Eindhoven in 1995. Carina Nilsson is Swedish, born in the city of Lund in 1970 and graduated in 1998 at Chalmers Technical University in Gothenburg.

issue 45 Meet five up-and-coming designers who are not afraid to create forward-looking, wardrobe-defining labels. With influences that are as far-reaching as classic Italian tailoring, streetwear, architecture and East Asian aes… ARCHIPROBA STUDIOS, Ilya Ivanov · DI_Telegraph The Central Telegraph is located on Tverskaya street in the center of Moscow. Architect Ivan Rerberg constructed the building in 1927, and it took only several decades for it to become an architectural monument. The Telegraph has an unusual perimeter structure with both modernist and constructivist features; its surprising geometry and broad glazing distinguishes the building against a background of the Stalinist empire style of that era. The DI_Telegraph space was originally used to send and receive wire telegrams and to provide other analog telecommunication services. At that time the room was full of equipment generating much heat, that is one of the reasons why its ceiling is seven meters high—hot steam was rising up to be pulled out by huge fans.

since 1999 home of design culture: designboom is the first and largest independent publication dedicated to architecture mar 31, 2016 #architecture last year, hadid spoke with designboom about her upbringing, influences, and creative vision. see her » following a complete re-structuring, the symbolic towers have been re-connected and rehabilitated to the » the acclaimed iraqi-born architect died of a heart attack in a miami hospital, where she was being treated » blending with the green exteriors, the interiors within this inviting eatery have been realized to complement » House on the Cliff Fran Silvestre Architects finished a ‘House on the Cliff’, an abrupt plot of land overlooking the sea, where what is best is to do nothing. It invites to stay. Due to the steepness of the plot and the desire to contain the house in just one level, a three-dimensional structure of reinforced concrete slabs and screens adapting to the plot’s topography was chosen, thus minimizing the earthwork. This monolithic, stone-anchored structure generates a horizontal platform from the accessing level, where the house itself is located.

The Archigram Archive [Image: From an "ongoing speculative proposal exploring the implications of cones of vision and their interaction with an existing neoclassical ‘temple’ on the River Thames in Henley, Berkshire," by Archigram/Michael Webb]. As of roughly 16 hours ago, the Archigram Archival Project is finally online and ready to for browsing, courtesy of the University of Westminster: the archive "makes the work of the seminal architectural group Archigram available free online for public viewing and academic study." The newly launched site includes more than 200 projects; "this comprises projects done by members before they met, the Archigram magazines (grouped together at no. 100), the projects done by Archigram as a group between 1961 and 1974, and some later projects." There are also brief biographies of each participating member of the collaborative group: Warren Chalk, Peter Cook, Dennis Crompton, David Greene, Ron Herron, and Michael Webb.

Japan Architecture+Urbanism In the final screening of the 3rd LIXIL* International University Architectural Competition, which was held publicly on April 20, Sat, 2013, HORIZON HOUSE by Harvard University was selected as the top prize among three finalists. Harvard University, National University of Singapore and Delft University of Technology were previously selected from a total of 12 designated universities from 11 different countries, to proceed to the selection of the top prize. HORIZON HOUSE is scheduled to be built in late October 2013 on a site at Memu Meadows – Center for Research on Environmental Technologies – in Taiki-cho, Hokkaido. *LIXIL Cooperation is Japan's leading building materials and housing equipment manufacturing and sales company

Superkilen / Topotek 1 + BIG Architects + Superflex Superkilen / Topotek 1 + BIG Architects + Superflex General descriptionSuperkilen is a half a mile long urban space wedging through one of the most ethnically diverse and socially challenged neighborhoods in Denmark. It has one overarching idea that it is conceived as a giant exhibition of urban best practice – a sort of collection of global found objects that come from 60 different nationalities of the people inhabiting the area surrounding it. Ranging from exercise gear from muscle beach LA to sewage drains from Israel, palm trees from China and neon signs from Qatar and Russia. Each object is accompanied by a small stainless plate inlaid in the ground describing the object, what it is and where it is from – in Danish and in the language(s) of its origin. A sort of surrealist collection of global urban diversity that in fact reflects the true nature of the local neighborhood – rather than perpetuating a petrified image of homogenous Denmark.

Empowering Architecture: architects, buildings, interior design, materials, jobs, competitions, design schools St. Ignatius Chapel by Dynerman Architects, pc Conceived as an elemental pavilion, the chapel’s design seeks to connect the celebrants to a dual past: a time when barns served as ancient churches and also to the later, more self-aware churches of the 15th century, whose manipulation of light served its mystical rites and themes. The architects aimed for a theme of rustic nobility, using a warm, minimal palette. The facade’s stucco walls are perforated with 8-inch slabs of glass and the floor of the chapel and courtyard is stained concrete.

Alternative Car Park Tower Proposal / Mozhao Studio Mozhao Studio shared with us their first prize winning proposal for the Hong Kong Alternative Car Park Tower competition which was held by held by AC_CA. Their design integrates the Hong Kong City Hall, the second-floor pedestrian system and streets on the second-floor level, provid¬ing a convenient and enjoyable network of public spaces. Because of this strategy, the park tower presents the citizen¬ship, which relates and echoes to the Hong Kong City Hall nearby. More images and architects’ description after the break. The car park tower, to some extent, is a public building where people can traverse and stay for a while. The top floor, which has high value due to having a great view of Victoria Harbor and Kowloon, composes Café and multi-functional area where the public can access anytime.