FormFiftyFive - Design inspiration from around the world 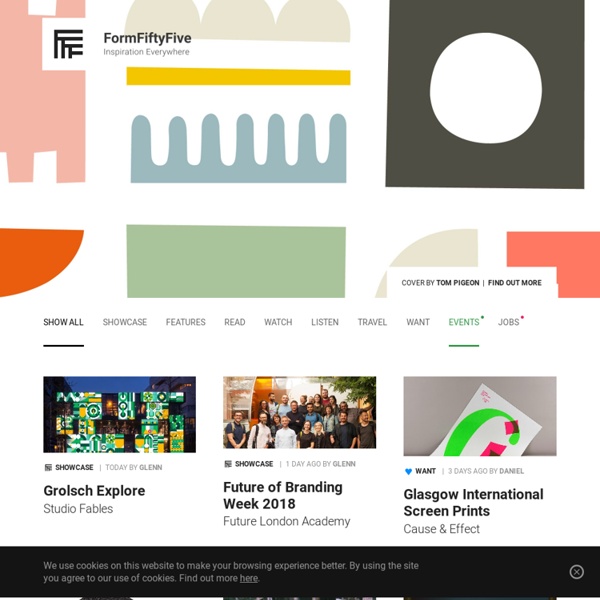 The Sexperience 1000 Welcome to The Sexperience 1000, an interactive journey through the sexual experiences and preferences of one thousand British individuals. What’s the favourite sexual position of iPhone users in the North? Do country music lovers over 55 prefer to do it in the dark? ultra look ultra look Photo April 20, 2014 49 notes Graphic Exchange - The blog of Mr Cup - graphic design, print, identity, products and more... This new deck by Joe White follow the Contraband one. You know Joe and his amazing detailed design as we work together on the (sold out) 2015 edition of the calendar and he designed the front cover. Every single playing card within the High Victorian deck was designed from scratch - even the Aces, Jokers, and court cards exude the grand excess of ornamentation quintessential to the Victorian era.

Opinions on Corporate and Brand Identity Work UnderConsideration is a graphic design firm generating its own projects, initiatives, and content while taking on limited client work. Run by Bryony Gomez-Palacio and Armin Vit in Austin, TX. More… products we sell Redesigned: 3-Prong Power Cords into Flat & Portable Plugs Sometimes, companies spend fortunes on industrial design teams for decades only to be outdone by a simple student project like this one: a flat fold-out version of the traditional three-prong power cord as thin and mobile as the Apple MacBook Air. In the United States we are familiar with the slightly-fattening third prong but in the United Kingdom the typical cord tip is even bigger, turning electrical cord ends into something that looks downright archaic next to our streamlined and thin modern gadgetry. Better yet, the design idea by Royal College of Art student Min Kyu Choi does not stop with a single cord – multi-plug cords were naturally factored into the mix as well. These ingenious extensions do not even require the simple 90-degree spin to fold out into full shape and thus save even more space despite being perfectly compatible with standard sockets.

Photo Inspiration Who doesn’t love baby photography, One of the most challenging and time consuming type of photography. It is easily one of the hardest kinds just because of the sheer amount of unexpected drama with the kids. It is also one of the most popular kind of photography too. 2011 Emmy Nominations for Outstanding Main Title Design 09/18/2011 UPDATE: Congrats to Elastic on their Game of Thrones Emmy win. The 2011 Emmy nominations for “Outstanding Main Title Design” have just been announced and some familiar faces (and studios) are back with more outstanding work. Imaginary Forces has two sequences in the running this year, with creative direction on both handled by Karin Fong — HBO’s Boardwalk Empire and AMC’s Rubicon.

20 design graphiques 28 octobre 2012 - graphisme - 4 059 views Cet article fait partie d’une série d’articles dans lesquels vous trouverez les images du web les plus inspirantes pour vos créations graphiques. «Bruised Water» par Marcusavedis - via Deviant Art Graphisme de Vector 619 - via Daily Inspiration We Made This Ltd Often, when you get a job back from the printer (having laboured over it for hours, days, weeks, and often months), there can be a certain sense of disappointment, with the final result not living up to your by now unjustifiably elevated expectations. That’s not to say that the finished object isn’t worthy of love and pride, just that you can easily have an idealised view of what you hope to have created, a view which reality can never match. But every now and then, the reverse happens.

Cube maze, designed by Lee-Kuo « DIY family This beautiful maze was completely designed by Lee-Kuo. He began with a few sketches on graph paper and then decided to use a 20 mm cube grid system with 5 mm thick walls. He drew the maze on 4 separate floors until he had a great pathway to the end. After he had finished the drawings he wanted to make it with matchsticks, we glued about 500 together and decided it would take to long, so I drew everything in Illustrator and printed it onto 120g paper. The result is a wonderfully strong cube maze which gives people hours of fun trying to get the ball through the maze. How to be a stylish designer.  You don’t know how to dress. Fashion has no meaning to you, other than buying a pair of jeans every two years or so. You don’t get the point of wearing anything otther than black. And there you are, a designer. Which means, you SHOULD be well-dressed, stylish, arty, whatever adjectives that fit your fancy. Or at least, that what it means for a lot of people in the street.

Typographic town logos in hiragana/katakana [Typographic logo for Kamagaya (Chiba) spells town name in katakana] Japanese town logos -- official symbols designed to communicate the identity of each municipality -- come in a vast array of shapes and colors. Many of these municipal symbols incorporate typographical elements (particularly kanji, hiragana, katakana, and Roman letters) into their designs. In most cases, the stylized characters are straightforward and easy to spot (even if you don't read Japanese), but sometimes you have to bend your eyes to see them. Nexa Free Font Fontfabric type foundry presents Nexa free font! Two styles (Light & Bold) available for direct free download only from fontfabric.com Enjoy! Buy Full versionstarts from $17 or just

Color + Design Blog by COLOURlovers Marketing, using illustrations, is more powerful than using text, which most people don't read. After all, they say that 'a picture is worth a thousand words.' A marketing illustration needs to have a strong message to the intended market to make an impact. Most news indicates that all illustrators are different, so what are the various marketing mistakes they need to avoid when doing their work? This article will highlight some. No smooth illustrations