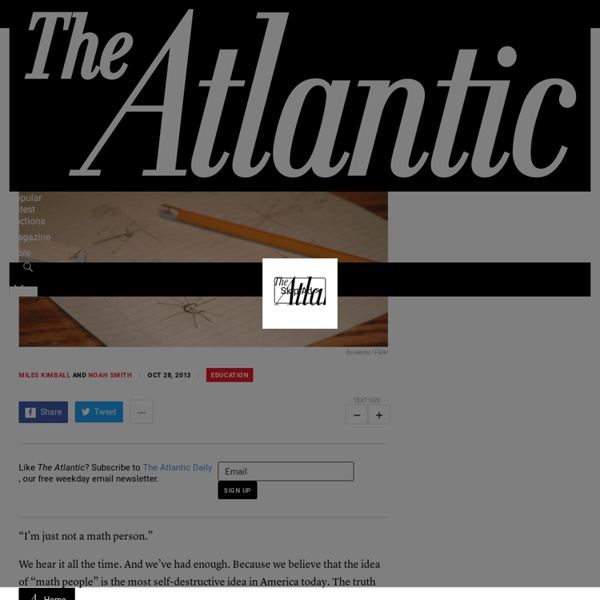 “I’m just not a math person.” We hear it all the time. And we’ve had enough. Because we believe that the idea of “math people” is the most self-destructive idea in America today. The truth is, you probably are a math person, and by thinking otherwise, you are possibly hamstringing your own career. Worse, you may be helping to perpetuate a pernicious myth that is harming underprivileged children—the myth of inborn genetic math ability. Is math ability genetic? How do we know this? Different kids with different levels of preparation come into a math class. Thus, people’s belief that math ability can’t change becomes a self-fulfilling prophecy. The idea that math ability is mostly genetic is one dark facet of a larger fallacy that intelligence is mostly genetic. A body of research on conceptions of ability has shown two orientations toward ability. You have a certain amount of intelligence, and you really can’t do much to change it. The results? So why do we focus on math? 1.

The Myth of Being ‘Bad’ at Math – Aspen Ideas – Medium Advances in neuroscience are revolutionizing our approach to education, and they have particularly weighty implications for the way we teach math. They challenge our basic assumptions about the subject, some of which have discouraged a lot of students from sticking with it. The most popular and damaging of these assumptions has been that some people can do math and others just can’t. Parents believe it, some teachers believe it, and soon enough, the students believe it too. Luckily, the evidence against this notion is piling up, thanks to recent discoveries about human brain plasticity. Some of you might have taken one of London’s famous black cabs, but you may not know how qualified the drivers are. When Emotional Intelligence Goes Wrong “People skills” are almost always assumed to be a good thing. Search employment ads and you will find them listed as a qualification for a startling array of jobs, including Applebee’s host, weight-loss specialist, CEO, shoe salesperson, and (no joke) animal-care coordinator. The notion that people smarts might help you succeed got a boost a quarter century ago, when the phrase emotional intelligence, or EI, entered the mainstream. Coined in a 1990 study [1], the term was popularized by Daniel Goleman’s 1995 book [2]. Since then, scores of researchers have shown how being in touch with feelings—both your own and other people’s—gives you an edge: compared with people who have average EI, those with high EI do better at work [3], have fewer health problems [4], and report greater life satisfaction [5].

5 Powerful Questions Teachers Can Ask Students My first year teaching a literacy coach came to observe my classroom. After the students left, she commented on how I asked the whole class a question, would wait just a few seconds, and then answer it myself. "It's cute," she added. Is Algebra Necessary? My question extends beyond algebra and applies more broadly to the usual mathematics sequence, from geometry through calculus. State regents and legislators — and much of the public — take it as self-evident that every young person should be made to master polynomial functions and parametric equations. There are many defenses of algebra and the virtue of learning it. Most of them sound reasonable on first hearing; many of them I once accepted.

'I'm Not A Math Person' Is No Longer A Valid Excuse REUTERS/Vasily Fedosenko Contrary to popular opinion, a natural ability in math will only get you so far in studies of the subject. Research published in Child Development found that hard work and good study habits were the most important factor in improving math ability over time. But bad attitudes about math are holding us back. Most of us would never think that "I'm bad at reading," is a good excuse to stop taking English classes, so why is it ok, even normal, to say "I'm bad at math"?

Why tidying up could change your life I am stuffing a letter between two books when I realise my possessions are in charge of me. It’s a hoarder’s attempt at tidying: hiding stuff inside other stuff. My coffee table groans under books, digital devices, coffee cups, lint rollers, newspapers and one or both of my kittens, Ollie and Sebastian. Bottles of toiletries line the bathroom mirror collecting dust, and upstairs cubbyholes burst with clothes I no longer wear. 20% Time In My Classroom I'm really excited to get started with my 20 Time set up in my classroom. I've talked to teachers in my department and many of them said they are going to find a way to use in their class for the second semester. I've used tons of great resources to make this happen and have tweaked things to make it fit my teaching style and my students.

JUMP Math Philosophy What's at the heart of the JUMP Math program. JUMP Math is dedicated to helping children succeed at, and enjoy, learning math. JUMP is aware that there is a strong causal link between a child's academic success and his or her future contribution to society. We strive to increase children’s chances of success, to reduce socio-economic disparities, to engender a sense of belonging and, most importantly, to endow voiceless children with opportunity. There are several core beliefs at the foundation of the JUMP Math philosophy:

Quit Saying ‘I’m Just Not a Math Person’ It started with a fairly simple problem. The class of elementary education majors were looking at energy and efficiency. This course is specifically designed to help these students get a basic understanding of the nature of science (using the awesome Physics and Everyday Thinking curriculum). Since the goal is to look at science, we don’t have too much math in the course. However, in this case students were trying to find the power needed such that a fluorescent lightbulb would have the same brightness as an incandescent bulb. In essence, this gives the students a word problem.

A Self-Made Billionaire Uses This Easy Trick for Decisions The first chapter in Seymour Schulich’s book, Get Smarter: Life and Business Lessons, offers a decision tool that adds to the simple pro-and-con list that many of us have used to make decisions. Schulich, a self-made billionaire, is one of Canada’s richest and best-known businessmen. I learned this tool in a practical mathematics course more than fifty years ago and have used it for virtually every major decision of my adult life. It has never let me down and it will serve you well, too. The Best 1:1 Device is a Good Teacher Photo credit: iStockPhoto Over the course of two years, I, along with the Burlington Public Schools tech team, had the opportunity to meet and connect with over one hundred schools. These discussions would usually involve what device works best in the classroom and how the iPad is affecting teaching and learning outcomes. Frequently this conversation focuses on the most effective hardware for teaching and learning. While this is an important decision to make, it should not be the focus. In fact, the best devices a school can employ are great teachers.