Distant Healing Intention Therapies: An Overview of the Scientific Evidence. Scientists Discover People Who Are Awake Can Influence Dreams Of Sleeping People Using Telepathy. Animal Communicators Prove it’s Possible to Hear an Animal’s Thoughts. US Army Successfully Uses Human With ‘Out Of Body’ Abilities To Locate A Lost Plane In Africa. For thousands of years, we have been fascinated by the idea of ordinary people being able to do extraordinary things. 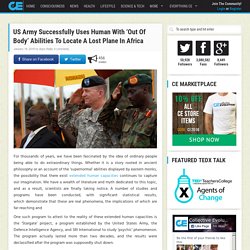 Whether it is a story rooted in ancient philosophy or an account of the ‘supernormal’ abilities displayed by eastern monks, the possibility that there exist extended human capacities continues to capture our imagination. We have a wealth of literature and myth dedicated to this topic, and as a result, scientists are finally taking notice. A number of studies and programs have been conducted, with significant statistical results, which demonstrate that these are real phenomena, the implications of which are far-reaching and One such program to attest to the reality of these extended human capacities is the ‘Stargate’ project, a program established by the United States Army, the Defence Intelligence Agency, and SRI International to study ‘psychic’ phenomenon. The Top 8 ‘Paranormal’ Scientific Studies & What We Can Learn From Them. Does Telepathy Conflict With Science? Many are Starting to Think Not : Waking Times.

Chris Carter, New DawnWaking Times Recently, journalist Steven Volk was surprised to discover that leading skeptical psychologist Richard Wiseman has admitted that the evidence for telepathy is so good that “by the standards of any other area of science, [telepathy] is proven.” 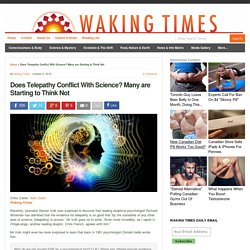 Mr Volk goes on to write, “Even more incredibly, as I report in Fringe-ology, another leading skeptic, Chris French, agrees with him.” Mr Volk might even be more surprised to learn that back in 1951 psychologist Donald Hebb wrote this: Why do we not accept ESP as a psychological fact? [J.B.] Four years later, George Price, then a research associate at the Department of Medicine at the University of Minnesota, published an article in the prestigious journal Science that began: CIA-Initiated Remote Viewing Program at Stanford Research Institute. Does your heart know your future? Check this mind boggling research! In a truly mind-boggling set of experiments, discussed in an article in the Journal of Alternative and Complementary Medicine in 2004, Dr Rollin McCraty from the Heartmath Institute—a leading-edge research centre for the scientific study of heart coherence and its health benefits and of other aspects of this revolutionary new science of the heart—found that the heart seems to ‘know’ the emotional future. 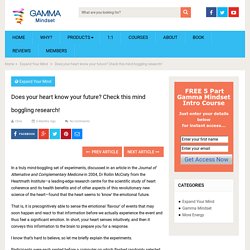 That is, it is precognitively able to sense the emotional ‘flavour’ of events that may soon happen and react to that information before we actually experience the event and thus feel a significant emotion. Heart Based Consciousness: Using The Heart As An Organ Of Perception. In modern day society, especially in the Western world, if you were to ask someone to point to the place in their body where their consciousness is located and their decisions are made, they would most likely point to their head. 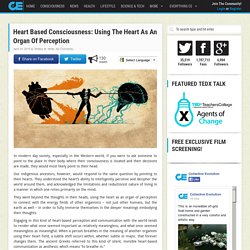 Our indigenous ancestors, however, would respond to the same question by pointing to their hearts. They understood the heart’s ability to intelligently perceive and decipher the world around them, and acknowledged the limitations and reductionist nature of living in a manner in which one relies primarily on the mind. They went beyond the thoughts in their heads, using the heart as an organ of perception to connect with the energy fields of other organisms – not just other humans, but the earth as well – in order to fully immerse themselves in the deeper meanings embodying their thoughts. The Heart-Brain Connection Although many of us have been taught that the heart responds to orders from the brain, sent in the form of neural The Heart And Energy Fields Try it Here!

Mind Over Matter: Princeton & Russian Scientist Reveal The Secrets of Human Aura & Intentions. A Russian scientist has been studying the human energy field and is claiming that people can change the world simply by using their own energy. 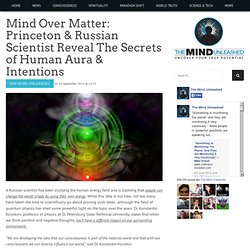 While this idea is not new, not too many have taken the time to scientifically go about proving such ideas -although the field of quantum physics has shed some powerful light on the topic over the years. Dr. Konstantin Korotkov, professor of physics at St. Petersburg State Technical University, states that when we think positive and negative thoughts, each have a different impact on our surrounding environment. “We are developing the idea that our consciousness is part of the material world and that with our consciousness we can directly influence our world,” said Dr. 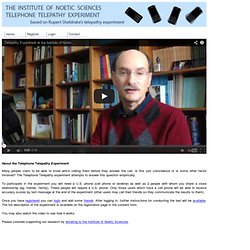 Is this just coincidence or is some other factor involved? The Telephone Telepathy experiment attempts to answer this question empirically. To participate in the experiment you will need a U.S. phone (cell phone or landline) as well as 2 people with whom you share a close relationship (eg. friends, family). These people will require a U.S. phone. Www.fas.org/sgp/eprint/teleport. Www.fas.org/sgp/eprint/teleport. The Uncharted Territory of Remote Healing. Ida Lawrence, ContributorWaking Times Part 2 of this series on the phenomenon of remote healing can be read, here. 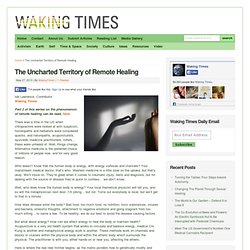 There was a time in the US when chiropractors were looked at with suspicion, homeopaths and herbalists were considered quacks, and naturopaths, acupuncturists, ayurvedic medicine practitioners, rolfers… these were unheard of. Well, things change. Alternative medicine is the preferred choice of millions of people now, and for very good reason. Who doesn’t know that the human body is energy, with energy vortexes and channels?

Well, who does know the human body is energy? How does disease enter the body? Open Your Third Eye and Awaken Your Pineal Gland With These Simple Exercises. Lapis LinksWaking Times Editor’s Note: This is an interesting method for awakening the Pineal Gland. 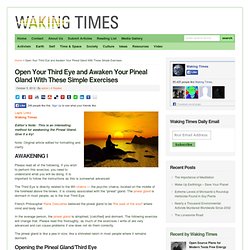 Give it a try! Plugging Into Your Intuition Helps Expand Consciousness. Have Scientists Discovered a Way of Peering Into the Future? Wiki Image. 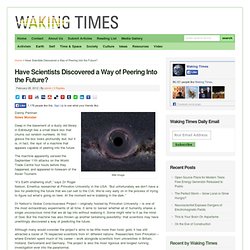 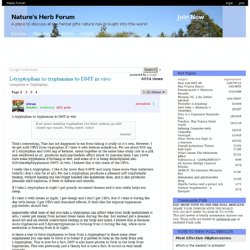 Pretty sweet, haha! -toastus That’s interesting. That has not happened to me from taking it orally on it’s own. I really like L-tryptophan. If I take L-tryptophan at night I get greatly increased dreams and it also really helps me sleep. Meditating Measurably Changes The Brain Even When Not Actively Meditating. Nov 13, 2012 by APRIL McCARTHY Meditating Measurably Changes The Brain Even When Not Actively Meditating A new study has found that participating in an 8-week meditation training program can have measurable effects on how the brain functions even when someone is not actively meditating. Published research has demonstrated that the practice of regular meditation can increase brain density, boost connections between neurons, decrease symptoms of depression and anxiety, provide clarity of thought, and increase positive mood endorphins. Other published studies have shown meditation can improve physical functioning, decrease chronic disease risks, and enhance overall quality of life.