Marbles, Try and clear the board by jumping one marble over another into an empty spot. To win you must end up with only one marble left on the board. A very easy, addictive and challenging game. 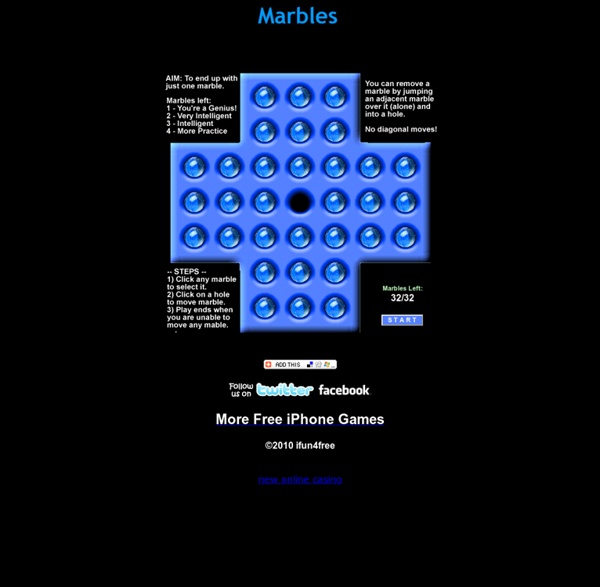 Pacxon - Online Game Additional Information: Use Pacman to capture sections of the board in Pacxon. Clear 80% to progress to the next level. Pacxon is the most popular game on the whole site! Curvy in HTML5 Curvy is a HTML5 puzzle game using the canvas element. Just rotate the tiles so that like colors connect. Modernizr tells me you don't have canvas support in your browser. Sadly, this game uses technology that's only in browsers with HTML5 support.

Streets of Rage Online - The #1 SOR Resource Site and Fan Community Streets of Rage 4 HD is a very ambitious SOR fangame which began development in early 2010, made using the popular OpenBoR engine. Produced by Zhang Qiang and Allan.Cylakes, the game showcases some impressive and unique hand-painted sprites, backgrounds and cutscene artworks, courtesy of the talented Huang Wentao and Xia Ji. The development team have gone to ground in an attempt to completely re-imagine the visual style of SOR in High Definition, and the result, as you can see from the screenshots here, is breathtaking. There is a lot of potential here, and it promises to be something very special indeed if the gameplay can match the quality of the visuals. A release was originally planned for PC and PSP, though it is unclear if and when this will finally happen.

A to K - 2048 clone by Creative Spark Studios How to play: Use your arrow keys to move the tiles. When two tiles with the same letter touch, they merge into the next letter in the alphabet! The goal is to create the letter K. The Rubik's Cube Solution How to Solve the Rubik's Cube in Seven Steps The world's most famous puzzle, simultaneously beloved and despised for it's beautiful simple complexity, the Rubiks Cube has been frustrating gamers since Erno Rubik invented it back in 1974. Over the years many brave gamers have whole-heartedly taken up the challenge to restore a mixed Rubik's cube to it's colorful and perfect original configuration, only to find the solution lingering just out of their grasp time and time again.

Play BREAKTHROUGH, a free online game on Kongregate Check your security settings Connection issues are typically caused by security settings on your network or computer. Check that your firewall or router has port 5222 open and allowing traffic. If you are on a school or office network, you may need to contact your network administrator to make the necessary changes. Textbook disclaimer stickers This post is for people tracking the bizarre ethical slide of The Consortium for Plant Biotechnology Research, Inc. (CPBR). As you probably know from my earlier posts, CPBR sends out a yearly invitation to plant biotechnology researchers to submit grant proposals. Part of the emailed PDF has instructions on how to make a scientific poster, and a big part of that section was created by copying/pasting text from my page on the topic (but with no quotation marks and no attribution). Because I happen to have an official copyright registration on my poster design page, the PDF is in violation of U.S. copyright law. So, in addition to being able to sue CPBR rather easily, I can can also use the Digital Millennium Copyright Act (DMCA) to send Notifications of Copyright Infringement (NOCIs) to have the CPBR document (PDF and any paper copies) destroyed.

Ultimate Tic-Tac-Toe Updated 7/16/2013 – See Original Here Once at a picnic, I saw mathematicians crowding around the last game I would have expected: Tic-tac-toe. As you may have discovered yourself, tic-tac-toe is terminally dull. There’s no room for creativity or insight. Good players always tie. Games inevitably go something like this: 2048 Join the numbers and get to the 2048 tile! New Game How to play: Use your arrow keys to move the tiles. When two tiles with the same number touch, they merge into one! Note: The game on this site is the original version of 2048. Apps for iOS and Android are also available. Fundamentals - Fallout 3 Wiki Guide - IGN Last Edited: September 9, 2013 at 10:13 PM Overview[edit] Fallout 3 is a post-apocalyptic western RPG with enough shooting mechanics that it is, indeed, a full-fledged hybrid title. You're given control of a male or female (depending on who you choose) who lives in a heavily-guarded nuclear fallout shelter. There's a big, bad post-nuclear world outside of the safety of Vault 101 -- your home -- but it won't be until you are 19 years that you finally get out into the world to see for yourself the devastation of nuclear warfare.