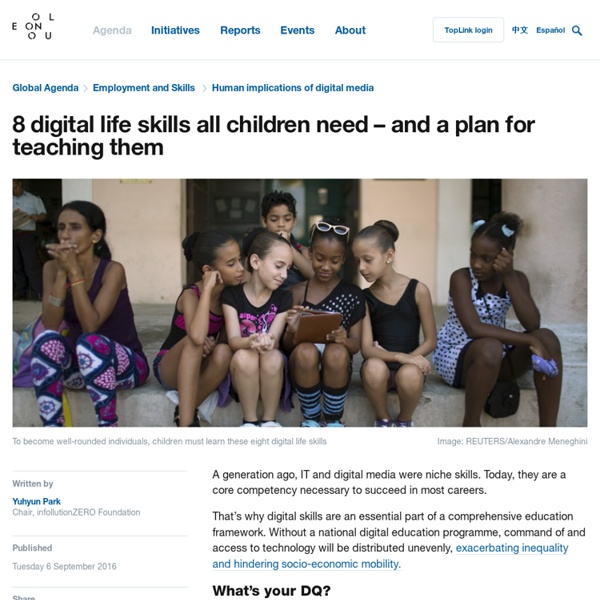 A generation ago, IT and digital media were niche skills. Today, they are a core competency necessary to succeed in most careers. That’s why digital skills are an essential part of a comprehensive education framework. Without a national digital education programme, command of and access to technology will be distributed unevenly, exacerbating inequality and hindering socio-economic mobility. What’s your DQ? The challenge for educators is to move beyond thinking of IT as a tool, or “IT-enabled education platforms”. Like IQ or EQ – which we use to measure someone’s general and emotional intelligence – an individual’s facility and command of digital media is a competence that can be measured. DQ can broadly be broken down into three levels: Level 1: Digital citizenship The ability to use digital technology and media in safe, responsible and effective ways Level 2: Digital creativity Level 3: Digital entrepreneurship Why are we neglecting digital citizenship? There is no need to wait. Share

The Power of Educational Innovation: A Design Thinking approach to Digital Citizenship Design Thinking is a problem solving methodology used by people all over the world to come up with new ideas. Recently there has been a lot of discussion about how to integrate this approach into education. This summer I took two Online courses to learn more about the process. Seven YA novels that show the lives of teens across the world Many fantasy, sci-fi and historical novels are set in or inspired by countries across the world; take books by Linda Sue Park or Ellen Oh, for example. But English language YA contemporary stories disproportionately take place in the US and, to a lesser extent, the UK, and those few that are set in other countries are often told through the lens of a newcomer rather than an actual native, which can detract from the cultural authenticity of the book. When you ask for YA contemporary novels set outside of Anglo-America, what you’re likely to get is a flurry of stories about upper-middle-class Americans or Brits who move halfway across the world and suffer from extreme culture shock. Although there’s nothing inherently wrong with that, those narratives can get tiring – and, in some cases, problematic – pretty quickly. A Time to Dance by Padma Venkatraman If You Could Be Mine by Sara Farizan

Digital Citizenship Poster for Elementary Classrooms Turn wired students into great digital citizens Get all the tools you need with Common Sense Education's FREE Digital Literacy and Citizenship Curriculum and Connecting Families Program. The relevant, ready-to-use instruction helps you guide students to make safe, smart, and ethical decisions in the digital world where they live, study, and play. Download a printable PDF of this poster (en español)Order a larger print through CafePress Curriculum

Beyond 'he' and 'she': The rise of non-binary pronouns Image copyright Kit Wilson In the English language, the word "he" is used to refer to males and "she" to refer to females. But some people identify as neither gender, or both - which is why an increasing number of US universities are making it easier for people to choose to be referred to by other pronouns. Kit Wilson's introduction when meeting other people is: "Hi, I'm Kit. I use they/them pronouns." That means that when people refer to Kit in conversation, the first-year student at the University of Wisconsin-Milwaukee would prefer them to use "they" rather than "she" or "he".

How This 11-Year-Old Turned Something Scary Into Something Sweet Mikaila Ulmer is only 11 years old but she's all about the business of bees. She's a social entrepreneur, public speaker, philanthropist and a savvy 6th-grader from Austin, Texas whose signature venture, "Me & The Bees" lemonade — developed from her great-grandmother's 1940 recipe — is now a thriving national business. After securing $60,000 on the hit TV show "Shark Tank," last year, Mikaila's lemonade will now be sold in 55 Whole Food stores — the world’s leader in natural and organic foods — in states including Texas, Oklahoma, Arkansas, Louisiana and Florida. While accepting her honors as one of the Movement50 (MVMT50) Top 10 Innovators of the Year at the South by Southwest festival, Mikaila also announced expanded distribution through UNFI (United Natural Foods), a leading national distributor of natural foods and beverages. Mikaila, who started her lemonade business in 2009, said the operation takes organization, commitment and energy.

Krtin Nithiyanandam is tackling Alzheimer and cancer Michael Newington Gray Think back to what you were doing when you were 15 years old, probably trying to get through GCSEs? Surrey-based teenager Krtin Nithiyanandam was developing a test for Alzheimer's disease, that could allow the condition to be diagnosed 10 years before the symptoms first appear. This 'trojan horse' antibody can penetrate the brain and attack neurotoxic proteins in the very first stages of the disease. These antibodies are injected into the bloodstream and are attached to fluorescent particles which can then be picked up on a brain scan. But how do you do this when just a teenager?