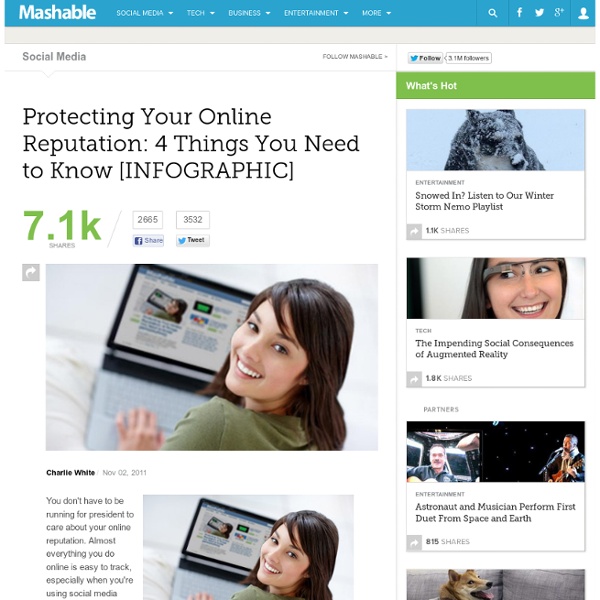 You don't have to be running for president to care about your online reputation. Almost everything you do online is easy to track, especially when you're using social media sites. This infographic shows you how to manage your "e-reputation," perhaps saving you some embarrassment, or even your career. Gathered by digital marketing firm KBSD, it's a treasure trove of tips, techniques and information about what companies and individuals are looking for inside your personal profiles and social information, and what you can do to show off your best side to those who might want to find out unflattering things about you. So now that you've grown up (you have grown up, haven't you?) Infographic courtesy KBSD, photo courtesy iStockphoto/Yuri Arcurs Related:  Digital Citizenship

THINK Poster Yahoo Launches New Social Sentiment Slider It’s not enough to ask consumers to talk about your brand, Yahoo says. If you want to get people really engaged, invite them to weigh in on relevant content. That’s the thinking behind the company’s latest social feature called the Social Sentiment Slider, which launched today. Placed directly beneath Yahoo stories, the sponsorable widget asks a question related to the article and lets readers register their opinions by sliding their cursors across an interactive scale. For example, after a story about the future of the iPod, the Sentiment Slider might ask, “Is the iPod going the way of the dinosaur?” “It’s a new approach to social,” said Patrick Albano, Yahoo’s vice president of social, mobile, and innovation. Jaguar has signed on as a launch sponsor, but he said three other brands will be announced soon. As the feature hasn’t formally launched yet, the company said it doesn't have metrics to share.

How Recruiters Use Social Networks to Screen Candidates Over the past few years, we've seen social media used in the job market in a number of ways — startups, small businesses and large corporations alike are diving into the socialverse to find top talent, and job seekers are likewise getting creative with social media. Social media monitoring service Reppler recently surveyed more than 300 hiring professionals to determine when and how job recruiters are screening job candidates on different social networks. The study found that more than 90% of recruiters and hiring managers have visited a potential candidate's profile on a social network as part of the screening process. And a whopping 69% of recruiters have rejected a candidate based on content found on his or her social networking profiles — an almost equal proportion of recruiters (68%), though, have hired a candidate based on his or her presence on those networks. Every week we post a list of social media and web job opportunities. Infographic courtesy of Reppler

Sightsmap THINK Poster YouTube Announces Addition of Channels in Late Friday Night Blog Post After months of speculation with almost no official confirmation, YouTube has finally announced its long-awaited channel strategy in a post to the company’s blog late Friday evening. The announcement falls in line with what had previously been reported in the press, namely that YouTube will be expanding its lineup of channels to include new offerings from a variety of partners, including well-known personalities and brands in the Hollywood, music, news, and sports worlds. “These channels will have something for everyone, whether you’re a mom, a comedy fan, a sports nut, a music lover, or a pop-culture maven,” YouTube’s global head of content partnerships Robert Kyncl said in the post. Under the new system, content creators—like Vice Media or the video game lifestyle network Machinima, for example—will have a dedicated channel on the site that they will control, continually updating it with video content.

Five-Minute Films "Digital citizenship" is an umbrella term that covers a whole host of important issues. Broadly, it's the guidelines for responsible, appropriate behavior when one is using technology. But specifically, it can cover anything from "netiquette" to cyberbullying; technology access and the digital divide; online safety and privacy; copyright, plagiarism, and digital law, and more. In fact, some programs that teach digital citizenship have outlined no less than nine elements that intersect to inform a well-equipped digital citizen. It's an overwhelming array of skills to be taught and topics to explore. But while there is much talk about the importance of teaching digital citizenship in this information society, not many are sure what that really looks like. Video Playlist: Teaching Digital Citizenship Watch the player below to see the whole playlist, or view it on YouTube. What is Digital Citizenship? More Resources for Learning About Digital Citizenship

5 Best Practices for Financial Institutions on Facebook Banks, often held back by industry regulations, are rarely considered innovative when it comes to social media. But Facebook is the perfect place for financial institutions to loosen their neckties, roll up their sleeves and show some personality. The Facebook community wants to connect on a personal level, rather than learn about policy updates. If you're involved in a financial institution's marketing plan and unsure of what your Facebook presence should like — or even if you should have a Facebook presence at all — take a look at these best practices. 1. Facebook — and social media in general — is all about connecting with people. "Banks aren't really the most trusted institutions right now," says Frank Eliason, Citi's SVP of social media. While Eliason admits much of what he does with Citi's Facebook Page is experimentation, he's found huge success posting content you wouldn't ordinarily expect from a bank. 2. 3. J.P. 4. 5.