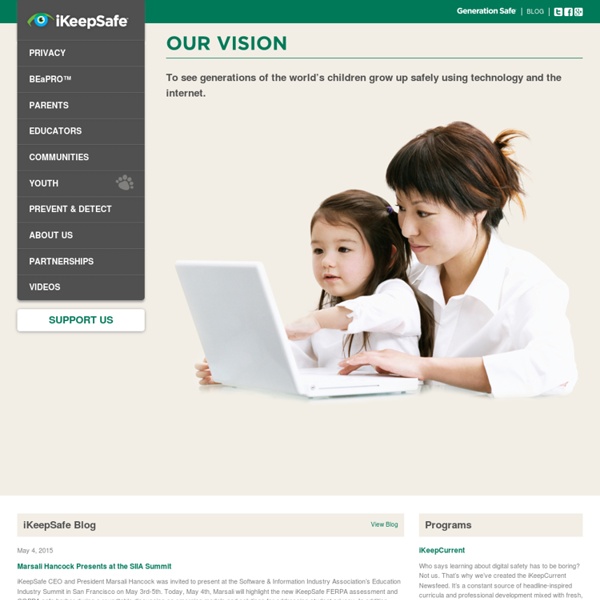 Learn more about the 6 Pillars of Digital Citizenship and Wellness: The iKeepSafe BEaPRO™ Parent Safety Index report identifies the six core competencies – The 6 Pillars of Digital Citizenship and Wellness – that keep kids safe online in our digitally connected culture. They are: balance, ethics, privacy, reputation, relationships and online security. Download the Report Sponsored in part by Microsoft and AT&T, this survey marks the first time that online safety core competencies have been identified and explored quantitatively. Findings from this report will be used to:

Ni områder af Digital Citizenship Nine Themes of Digital Citizenship Digital citizenship can be defined as the norms of appropriate, responsible behavior with regard to technology use. 1. Digital Access: full electronic participation in society. What is Digital Citizenship? NetSafe - Learn Drawing from the Key Competencies and Values in the New Zealand Curriculum and a growing body of research knowledge, NetSafe, in consultation with New Zealand teachers has produced this definition of a New Zealand Digital Citizen. A digital citizen: is a confident and capable user of ICT uses technologies to participate in educational, cultural, and economic activities uses and develops critical thinking skills in cyberspace is literate in the language, symbols, and texts of digital technologies is aware of ICT challenges and can manage them effectively uses ICT to relate to others in positive, meaningful ways demonstrates honesty and integrity and ethical behaviour in their use of ICT respects the concepts of privacy and freedom of speech in a digital world contributes and actively promotes the values of digital citizenship Digital literacy or the ability to understand and fully participate in the digital world is fundamental to digital citizenship.

K-12 Digital Citizenship Curriculum Navigating cyberbullying, privacy, safety, and other digital dilemmas are a real challenge for schools. But technology also provides incredible opportunities for students to learn, connect, create, and collaborate in ways never before imagined. Your school can build a positive school culture that supports the safe and responsible use of technology with Common Sense Education's K-12 Digital Citizenship Curriculum. Students can build skills around critical thinking, ethical discussion, and decision making. And you and your school can join thousands of others across the globe by getting recognized for your efforts.

In None We Trust I wonder how many teachers would be prepared to gather all their students together at a school assembly sometime and say the following to them … “Look, we just need you all to know that we do NOT trust you. We’ve talked about it, and we think that given the opportunity, you will all get up to no good and make poor decisions. Because of this, we plan to closely monitor your every move and to make sure that you don’t get away with anything, ever. We plan to prevent you from doing common tasks that are probably perfectly fine and safe. Disruptions: Privacy Fades in Facebook Era David Paul Morris/Bloomberg NewsPrivacy is a rare commodity today with the high amount of information being posted on social networking sites such as Facebook. As much as it pains me to say this: privacy is on its deathbed. I came to this sad realization recently when a stranger began leaving comments on photos I had uploaded to Instagram, the iPhone photo-sharing app.

The Digital Citizen To be a citizen, of a country brings certain rights and responsibilities.In Rome, a citizen was exempt some taxes, protected against certain punishments, empowered with rights like voting, making contracts, marriage and standing for office. But with these rights also came responsibilities. The citizen of Rome had to speak Latin, pay taxes, serve jury duty, be registered and identified by birth certificate and census. They also had to up hold social responsibilities and be virtuous. Digital citizenship has similar benefits and responsibilities.

13 Tips for Monitoring Kids’ Social Media The American Academy of Pediatrics (AAP) recently released findings from a comprehensive study on the impact social media has on kids and families. Although there are real benefits to kids using sites like Facebook, including increased communication, access to information and help in developing a sense of self, there can be serious downsides to all this online sharing too. Social networking is on the rise, and the study found that 22 percent of teenagers log onto their favorite social media sites more than 10 times a day, and that 75 percent own cell phones. This level of engagement online increases the risks of cyberbullying, “Facebook depression” (a new phenomenon where “de-friending” and online bullying lead to symptoms of depression), exposure to inappropriate content, and sexting. Just as we prepare our kids for life in the real world, we should prepare them for life in the online world.

Developing Our CLC We are very proud of the process we used to implement our Connected Learning Community here at YIS. Our highest priority was to involve individuals from all stakeholder groups at all levels of the development – from creating our vision, to writing the Responsible Use Agreement, to the implementation plan. Over the course of the 2010 – 2011 school year, we had over 30 people involved from students, to parents, to administrators, to teachers.

Activism or Slactivism? The Kony 2012 Campaign as a Teachable Moment Sam Hodgson for The New York TimesJacob Bubenheim, 20, and Alyssa Ramirez, 20, packed “action kits” on Thursday at Invisible Children’s San Diego headquarters.Go to related article » Note to Teacher | This lesson suggests showing photographs and videos of brutality wrought in Africa by Joseph Kony and the Lord’s Resistance Army. The slide shows, videos and articles contain graphic material that may not be appropriate for all students. Overview | What is the real story behind the “Kony 2012″ video and the “Stop Kony” campaign?