HouHouHaHa - The Art of Sharing 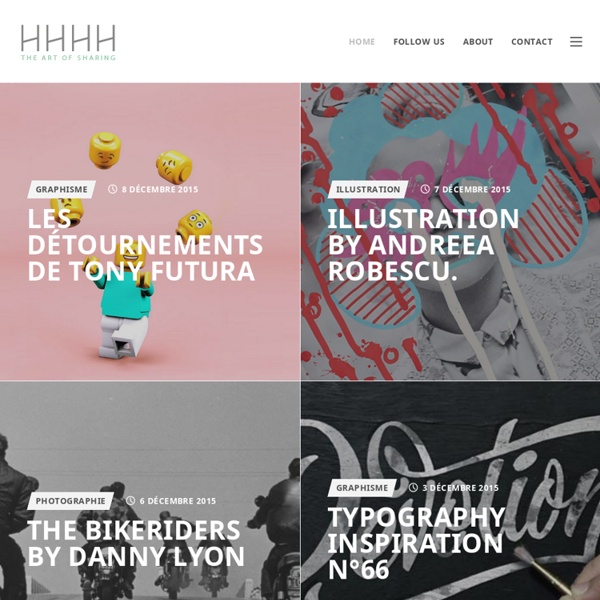 Quipsologies • Quipsologies, is a division of UnderConsideration, chronicling the most curious, creative, and notable projects, stories, and events of the graphic design industry on a daily basis. • Quipsologies uses TypeKit to render P22 Underground, Skolar Web by TypeTogether, and Coquette by Mark Simonson. • Quipsologies is run with Six Apart’s MovableType 6.3.2 • Syndicate / RSS Feed

Michael Tittel: Behavior This week we are sharing work submitted to Lenscratch… It does not happen often, but every now and then I will catch someone sneaking a candid of me in public. It is the photographer in me that relates to the strides taken for the perfect image, and because of this I always pretend I cannot see them. I shake their presence off in hopes that I embodied what they needed, that in some way I managed to help them in their quest for a perfect image.

Louis Vuitton Pumpkin It was a Louis Vuitton ice cream cone earlier this week and with Halloween just around the corner, we present a Louis Vuitton pumpkin. Love the tag detail! This was posted last October on a blog called Contentinacottage, which has nothing to do with fashion but is so worthy of a visit because almost every post provides a visual delight that feels like the exact right tonic for those in need of a bit of an escape from the world of fashion. And who doesn’t sometimes? Rune Guneriussen These dream-like installations are assembled, and then photographed by Norwegian artist Rune Guneriussen. Just imagine being out for a walk in Norway’s countryside, turning a corner and discovering a magical forest of lamps, a tangle of chairs, or a river of books. Sadly, once the photograph is taken, Rune removes the installation, the only proof of it’s existence being these images… sort of like waking up from an amazing dream that you could have sworn was real. As an artist, I believe strongly that art itself should be questioning and bewildering as opposed to patronising and restricting. As opposed to the current fashion I do not want to dictate a way to the understanding of my art, but rather indicate a path to understanding a story. Rune Guneriussen’s site

SECOND EDITION (2008) : PANOS 2013, FAKE ROADSIGNS This edition is produced by Grand Lyon for Lyon 2013. Powered by Unchi Leisure Center and Arty Farty, curated by Kanardo, supported by Bewol and 55-555. So many thanks to all the artists who have been involved in this project. The second edition of this project couldn't have happened without the precious help of all the guys who have erected the signs in the streets. Stunning Collection of Abstract Art Paintings Top Home » Illustration • Inspiration » Stunning Collection of Abstract Art Paintings Abstract art is an interesting form of art that makes use of visual language of form, color and line. These elements create an interesting work of art that stays alive with a scale of independence from visual references in the world.

Égarements by Cerise Doucède With application, precision and humour, photographer Cerise Doucède created the series ‘Égarements’ (aberration) consisting of installations which represents each of our dreams and obsession or even fears. By shaping her own visions, she reproduces her version of reality and sublimates the most ordinary moments. Objects thus come to life around one or more figures, in intimate locations, at key moments of everyday life.

Artist Book Series + Daily Art & Design Blog Gabriel Moreno does beautiful work with such basic materials: a pen and a brush. His illustrations begin in black and white, upon which Moreno builds, adding layers of color and images of other places and people tattooed into their skin. Flowers, birds, and faces organically expand from his subjects, as if a rush of creativity, or a dream, is escaping them.