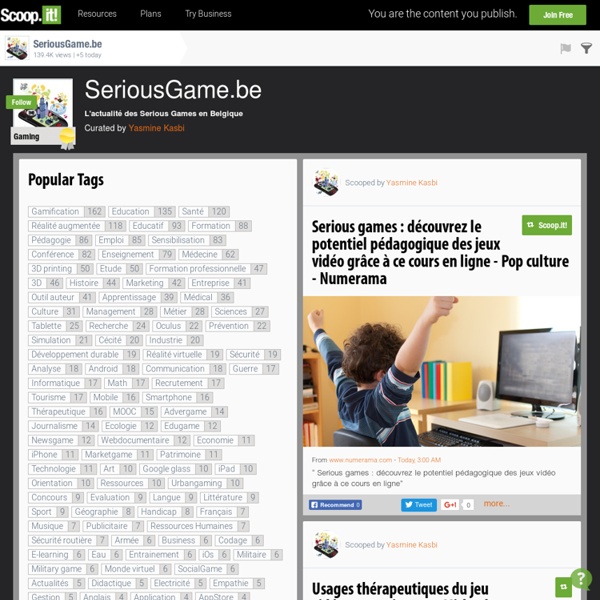 BEAT THE CENSOR - an illustration of different censoring attempts SCORE: 0000 | Users connected: 000 Why do some countries censor the internet? Frankly we do not know and you would need to ask the respective governments why they are doing it. Where does the data comes from? Motivational Theories and Design This page was originally authored by Diana Bang (2011). This page was added to by Marijke Henschel (February 2013) This page is being edited by Christopher Ward (January-April 2014) Motivation is the force that drives one to act[1]. It involves biological, cognitive, emotional, and/or social factors within a human being or animal that arouse and direct goal-oriented behaviour [2]. It is a construct that cannot be directly observed, and must be inferred from what is perceived to be purposeful behaviour.

27 Simple Ways To Get Students Excited About Innovation Recently, our neighbors introduced us to a couple of their friends who are from Spain. They are both professors here and have a kid who will be entering college in the US this fall. We were chatting about where we’ve lived and where we’d like to, and the topic of taxes came up. One of the things that was mentioned is that in Spain (and in Europe more generally) things like healthcare are offered free of cost and higher education is much much cheaper there than in the US due to the differences in our tax systems. But one of the reasons they thought it was better that their daughter was going to go to school in the US is that they felt that the opportunities for innovation are much bigger here. That got me thinking: what makes a particular teacher innovative doesn’t necessarily help their students to be innovative.

processing : black hole pong Robert Unwin summer project 2010 This game is a light-hearted remake of the old classic, except with a cosmic twist! The original game of Pong involved each player controlling a paddle which they would use to bounce a ball back to their opponent, in the hope they would miss. Each time the ball touched the opponent's side of the screen, the player would win a point. In this remake, each player now controls a black hole! Towards Reproducible Descriptions of Neuronal Network Models Introduction Science advances human knowledge through learned discourse based on mutual criticism of ideas and observations. This discourse depends on the unambiguous specification of hypotheses and experimental procedures—otherwise any criticism could be diverted easily. Moreover, communication among scientists will be effective only if a publication evokes in a reader the same ideas as the author had in mind upon writing [1]. Scientific disciplines have over time developed a range of abstract notations, specific terminologies and common practices for describing methods and results. These have lifted scientific discourse from handwaving arguments about sloppily ascertained observations to precise and falsifiable reasoning about facts established at a well-defined level of certainty.

Finding Good Ideas, Design Sprints and Designing Games CSU Resources Here are some resources you may find helpful from the workshop. When you are in the classroom or teaching online, you may want to find new and interesting ways to engage students. Here is a course titled How to Increase Learner Engagement which provides ten great ideas for breaking away from the lecture and working toward engaging […]

Toca Builders Dear Parent, Meet the Builders! They’re a nifty bunch here to help you realize your wildest construction dreams and plans. The Builders are at your command: build, paint, tear down and PLAY – Toca Builders is as much a tool for creating constructions as it is a world in which to create your own fantastic games. Toca Builders is the first toy for me as a Play Designer to oversee from start to end, and with the newcomer’s ambition I feel we’ve pushed the envelope of what a Toca Boca toy can be. We’re so excited to see what you will create using Toca Builders, and we hope both you and your child will have as much fun with Toca Builders as we’ve had both making it AND playing with it!

20 Resources for Teaching Kids How to Program & Code Isn't it amazing to see a baby or a toddler handle a tablet or a smart phone? They know how technology works. Kids absorb information so fast, languages (spoken or coded) can be learned in a matter of months. Recently there has been a surge of articles and studies emerging about teaching kids to code. We live in a "Back to the Future" movie.

How Many Social Shares Did That Get? [FREE TOOL] I love social sharing buttons. I like them because they can serve as quiet little social calls-to-action, enticing content readers to share my articles on social networks like Twitter and Facebook. But I love them because they tell me (and everyone else) how many times those articles have been shared. Simple, transparent social media metrics. And because these buttons are so popular, if I feel an urge to compare the sharing data for my content with that of my competitors' content, I can typically just navigate to the other site and see what that website's buttons say. But some sites don’t have those social sharing buttons set up.

Rhizomatic Learning - The community is the curriculum Doing this course I've put together a blog post to give you a sense of 'where' the course is happening and what you might like to do as part of it. READ THIS FIRST = Your unguided tour of Rhizo14 Why might this course be for you? Rhizomatic learning is a story of how we can learn in a world of abundance – abundance of perspective, of information and of connection. Deep learning Branch of machine learning Deep learning (also known as deep structured learning or differential programming) is part of a broader family of machine learning methods based on artificial neural networks with representation learning. Learning can be supervised, semi-supervised or unsupervised.[1][2][3]

Top-Down: A New Approach to the Semantic Web Earlier this week we wrote about the classic approach to the semantic web and the difficulties with that approach. While the original vision of the layer on top of the current web, which annotates information in a way that is "understandable" by computers, is compelling; there are technical, scientific and business issues that have been difficult to address. One of the technical difficulties that we outlined was the bottom-up nature of the classic semantic web approach. Semantic Web Patterns: A Guide to Semantic Technologies In this article, we'll analyze the trends and technologies that power the Semantic Web. We'll identify patterns that are beginning to emerge, classify the different trends, and peak into what the future holds. In a recent interview Tim Berners-Lee pointed out that the infrastructure to power the Semantic Web is already here. ReadWriteWeb's founder, Richard MacManus, even picked it to be the number one trend in 2008. And rightly so. Not only are the bits of infrastructure now in place, but we are also seeing startups and larger corporations working hard to deliver end user value on top of this sophisticated set of technologies.