Can your diet 'cure' cancer? Everyone knows diet and health are related. 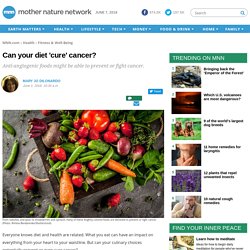 What you eat can have an impact on everything from your heart to your waistline. But can your culinary choices potentially prevent or even cure cancer? The link between cancer and diet is a much-studied, mysterious one, say researchers. Many studies have pointed to foods that either seem to prevent or exacerbate cancer growth. But the research has been mostly inconclusive. Studies have pointed to associations between certain foods and cancer, according to Harvard Health, not a cause-and-effect relationship. Prostate Cancer and Pomegranate. July 5, 2006 -- A glass of pomegranate juice a day may keep prostate cancerprostate cancer recurrence away, UCLA researchers report. 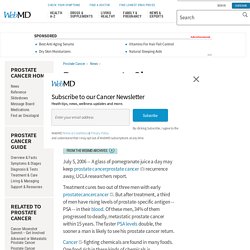 Treatment cures two out of three men with early prostatecancercancer. Do not toss: Overripe bananas may be effective against cancer cells, finds scientific study. Cancer Cells Will HATE You For Drinking Bitter Melon Juice And Here’s Why. Don’t judge a book by its cover. 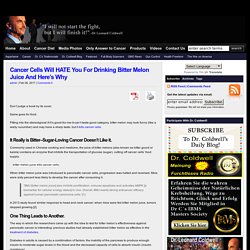 Same goes for food. Fitting into the stereotypical if-it’s-good-for-me-it-can’t-taste-good category, bitter melon may look funny (like a warty cucumber) and may have a sharp taste, but it kills cancer cells. It Really is Bitter–Sugar-Loving Cancer Doesn’t Like it. Commonly used in Chinese cooking and medicine, the juice of bitter melons (also known as bitter gourd or karela) contains an enzyme that inhibits the transportation of glucose (sugar), cutting off cancer cells’ food supply.

They were right. 25 Cancer Stem-Cell Killing Foods That Are Smarter Than Chemo and Radiation. By Sayer Ji Contributing Writer for Wake Up World A new scientific review has identified 25 of the top foods and herbs which kill cancer stem cells at the root cause of cancer malignancy. 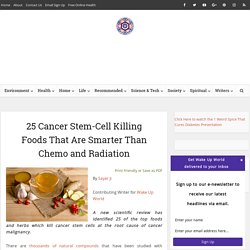 There are thousands of natural compounds that have been studied with demonstrable anti-cancer activity (check out over 600 on GreenMedInfo’s cancer research database), but only a small subset of these have been proven to target and kill the cancer stem cells which lie at the root of cancer malignancy. Turmeric, for instance, we have featured a number of times for its “smart kill” property of targeting just the heart of cancerous tumors. Why Eating Pomegranate Could Save Your Life. January 3rd, 2017 By Sayer Ji Contributing writer for Wake Up World Millions die every year from cancer. 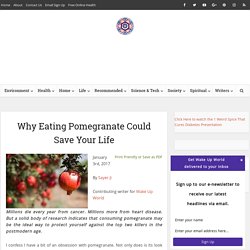 Millions more from heart disease. But a solid body of research indicates that consuming pomegranate may be the ideal way to protect yourself against the top two killers in the postmodern age. I confess I have a bit of an obsession with pomegranate. I’ve written and lectured previously on foods with life-saving properties, such as garlic, lime juice, and of course the amazing spice turmeric to which I have dedicated an entire resource page on GreenMedInfo.com.

Personally, I’m most fascinated by pomegranate’s striking resemblance to the human ovary and how it contains mammalian-type steroid hormones like estrone and testosterone normally found in the ovaries — an example of the “doctrine of signatures,” which I recently covered in my article: “Why Walnut Resembles the Brain It Nourishes.” 15 Foods that Force Cancer Cell Death, Remove Toxins and Relentlessly Hunt Free Radicals – REALfarmacy.com. By Elisha of My Health Maven Research over the past decade has shown without a doubt, that what you eat has a profound effect on your overall health. 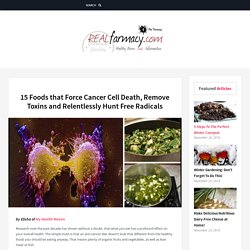 The #1 Cancer Fighting Vegetable You Should Be Eating 3 Times a Week. Mustard and Romaine greens salad with Blue Cheese By Dr. 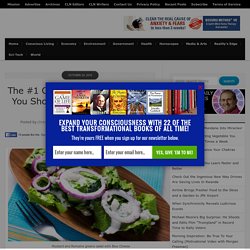 Joseph Mercola | mercola.com Eating plenty of vegetables can help reduce your risk for many chronic diseases, including diabetes, heart disease, stroke and certain cancers. For example, one 2010 study found that eating just one extra serving of leafy greens a day reduced the risk of type 2 diabetes by 14 percent.1 Fresh vegetables are a nutritional cornerstone, as most are very low in calories and net carbs while being high in beneficial fiber,2 vitamins and minerals. Phytochemicals found in plants have potent anti-inflammatory capacity and some even help in the elimination of carcinogens. Leafy greens, thanks to their high fiber content, also activate a gene called T-bet, which is essential for producing vital immune cells in the lining of your digestive tract.3 ILCs even help resolve cancerous lesions and prevent the development of bowel cancers and other inflammatory diseases. 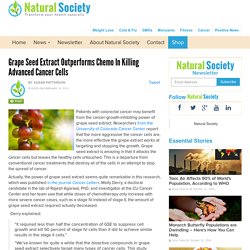 Researchers from the University of Colorado Cancer Center report that the more aggressive the cancer cells are, the more effective the grape extract works at targeting and stopping the growth. Grape seed extract is amazing in that it attacks the cancer cells but leaves the healthy cells untouched. This is a departure from conventional cancer treatments that destroy all of the cells in an attempt to stop the spread of cancer. Actually, the power of grape seed extract seems quite remarkable in this research, which was published in the journal Cancer Letters. 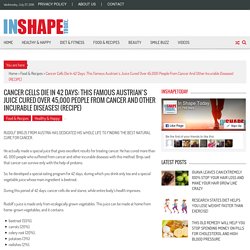 He actually made a special juice that gives excellent results for treating cancer. He has cured more than 45, 000 people who suffered from cancer and other incurable diseases with this method. Brojs said that cancer can survive only with the help of proteins. So, he developed a special eating program for 42 days, during which you drink only tea and a special vegetable juice whose main ingredient is beetroot. During this period of 42 days, cancer cells die and starve, while entire body’s health improves. Rudolf’s juice is made only from ecologically grown vegetables. Beetroot (55%),carrots (20%),celery root (20%),potatoes (3%)radishes (2%). Preparation: Put all these ingredients in a blender, mix them well and that`s all, your juice is ready!

It is important to note that you should not exaggerate with the juice, but you should take as much as your organism needs. Source; mynaturalwayoflife.co. Beet Juice Recipe with Liver Cleansing Foods. Your liver is your main detoxifying organ, and it can get bogged down from time to time depending on your diet, activity level, and environment. 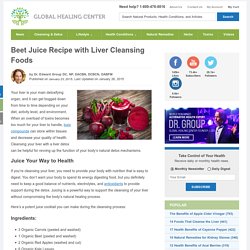 When an overload of toxins becomes too much for your liver to handle, toxic compounds can store within tissues and decrease your quality of health. Cleansing your liver with a liver detox can be helpful for revving up the function of your body’s natural detox mechanisms. Juice Your Way to Health If you’re cleansing your liver, you need to provide your body with nutrition that is easy to digest.

You don’t want your body to spend its energy digesting food, but you definitely need to keep a good balance of nutrients, electrolytes, and antioxidants to provide support during the detox. Here’s a potent juice cocktail you can make during the cleansing process: Ingredients: 3 Organic Carrots (peeled and washed)1 Organic Beet (peeled and washed)2 Organic Red Apples (washed and cut)6 Organic Kale Leaves½ inch of ginger root½ organic lemon, peeled Directions:

The newest medical research found that these 7 foods that we are presenting today are extremely beneficial in the case of cancer, as they inhibit cancer growth. What’s more, they have been shown to be even more powerful than chemo. The best thing about it all is that these seven foods are actually some of our favorite! These are the following: Curry, Green tea, Black chocolate, Raspberries, Blueberries, Tomatoes, and Red wine.

This One Fruit Kills Malignant Cells of 12 Different Types of Cancer. By Christina Sarich | NaturalSociety.com What would you do if you found out that the extract from a single fruit could keep the rogue cells of 12 different types of cancer in check? Mainstream media reports that the fruit known as graviola, also known as soursop fruit, guanabana, or guyabano, is not a noteworthy cancer-fighter, but there are studies showing it effectively fights ovarian, colon, breast, prostate, lung, liver, cervical, lymphoma, and pancreatic cancers. For pancreatic cancer, graviola was shown to be effective at “inhibiting tumorigenicity,” as well as “altering pancreatic tumor cell metabolism,” found one pathologist at the University of Nebraska.

Beyond Resveratrol: The Anti-Aging NAD Fad. Aging cells. Old human fibroblasts showing their mitochondria in large branched networks (red), their nuclear DNA (blue) and sites of DNA damage (green). (Image: Glyn Nelson/Flickr) Whenever I see my 10-year-old daughter brimming over with so much energy that she jumps up in the middle of supper to run around the table, I think to myself, "those young mitochondria. " Mitochondria are our cells' energy dynamos. Descended from bacteria that colonized other cells about 2 billion years, they get flaky as we age. Black Seeds - Cancer: Father Romano Zago's Cure for Cancer Using Aloe Vera and Honey. The book "Cancer Can Be Cured" is written by Father Romano Zago in 2000 and then he also wrote in 2009, "Aloe isn't Medicine and Yet it Cures.

" The purpose of these books is to show the world that curing cancer does not have to be expensive. His simple 3 ingredient formula when prepared correctly has been reported to cure many types of cancers and even Lupus. Who is Father Romano Zago Father Romano Zago is a Franciscan Friar and scholar and was born in 1932 in Brazil.

The book goes into detail on how he was tending to the poor in Brazil along with Father Arno Reckziegel where they witnessed how quickly the people returned back to health after being administered Aloe Arborescens and honey. The Recipe is very simple The recipe is very simple and Father Zago never states it is miraculous, although it has healed many types of cancers. The duration it takes to heal is two to three months. Ingredients. Here’s How Horseradish Root Helps Prevent Respiratory Illness, UTIs & Cancer. By Dr. Healthy News and Information. Did you know? The nutritional properties of the bananas hanging in your kitchen actually change as they grow riper.

As they ripen, bananas become sweeter. Compound in Celery Found to Destroy 86% of Lung Cancer Cells. A Simple Plant Kills Up To 98% Of Cancer Cells – And Stops Diabetes - NewsSum. Pineapple Compound Bromelain Trumps Colonoscopy for Colon Health. Barbara Minton | Naturalsociety | Jan 4th 2014 Is your doctor pushing you to get a colonoscopy, but your instincts are saying don’t do it? If so, it’s time to discover the pitfalls of colonoscopy and virtues of pineapple – a food that can truly help improve colon health.

Can This Vegetable Be the Cure for Lung Cancer? There is an old myth floating around that this is quite possibly the most useless vegetable that you could put into your mouth. On that note, let’s make a grand introduction – it’s time to learn about celery. First things first, scrap the urban health advice. Celery has a ton of nutritional benefits, being packed full of vitamins and water, bettering your health while hydrating you at the same time. Phytonutrients in cranberries block cancer cells. Wed. True Story: 74-Year-Old with Weeks to Live Beats Cancer with Wheatgrass. Mike Barrett | Naturalsociety | Nov 26th 2013 It’s truly amazing, how someone can use something as simple as baking soda or vitamin C to overcome life-threatening conditions.

There are so many stories about how people utilize mega-doses of natural substances to wipe out disease, and you’re about to hear one. This story is about a 74 year old man with stomach cancer, and how he ignored chemotherapy only to overcome his disease with wheatgrass. Danny McDonald from Dunaff, Ireland received terrible news from mainstream medical professionals at the late age of 74. After an ulcer suddenly burst within his abdomen, he was rushed to the hospital where doctors struggled to control the bleeding.