Latest on Alzheimer’s Research: Probiotics, Plaque Busters. Alzheimer’s is a devastating and ultimately fatal disease, but there may be a new form of treatment on the horizon. In a new clinical trial, researchers say they’ve successfully used probiotics to slow down cognitive impairment in Alzheimer’s patients. Probiotics are the beneficial microorganisms that many people take as dietary supplements. Doctors from Kashan University of Medical Sciences in Iran conducted a randomized, double-blind controlled clinical trial in which women and men between 60 and 95 years of age were given a daily dose of milk enriched with four probiotic bacteria.

A control group was given milk without probiotic bacteria. By the end of the 12-week experimental study, patients who had been given probiotics saw improved scores on the Mini-Mental State Examination scale, a metric for measuring cognitive improvement. Alzheimer’s breakthrough uses ultrasound technology - UQ News - The University of Queensland, Australia. Queensland scientists have found that non-invasive ultrasound technology can be used to treat Alzheimer’s disease and restore memory. 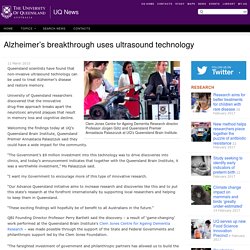 University of Queensland researchers discovered that the innovative drug-free approach breaks apart the neurotoxic amyloid plaques that result in memory loss and cognitive decline. Welcoming the findings today at UQ’s Queensland Brain Institute, Queensland Premier Annastacia Palaszczuk said they could have a wide impact for the community. “The Government’s $9 million investment into this technology was to drive discoveries into clinics, and today’s announcement indicates that together with the Queensland Brain Institute, it was a worthwhile investment,” Ms Palaszczuk said. Can Coconut Oil Prevent Alzheimer's? UTMB researchers discover a way to potentially slow down Alzheimer's. Researchers at the University of Texas Medical Branch at Galveston have discovered a way to potentially halt the progression of dementia caused by accumulation of a protein known as tau. 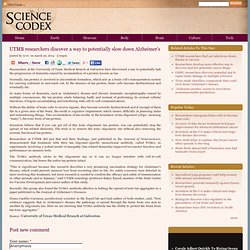 Normally, tau protein is involved in microtubule formation, which acts as a brain cell's transportation system for carrying nutrients in and waste out. In the absence of tau protein, brain cells become dysfunctional and eventually die. In many forms of dementia, such as Alzheimer's disease and chronic traumatic encephalopathy caused by multiple concussions, the tau protein starts behaving badly and instead of performing its normal cellular functions, it begins accumulating and interfering with cell-to-cell communications. Without the ability of brain cells to receive signals, they become severely dysfunctional and if enough of them die in a given area of the brain, the result is cognitive impairment, which means difficulty in planning tasks and remembering things.

Andres Lozano: Parkinson's, depression and the switch that might turn them off. Alzheimer’s Australia Dementia Research Foundation (AADRF) Siddharthan Chandran: Can the damaged brain repair itself? Pill could spare 500,000 the agony of Alzheimer's. 'Exciting' research could lead to generally available pill within five yearsIf trials are successful, drug would help around 400,000-500,000 Britons who are deemed at 'high risk' of developing Alzheimer's By Jenny Hope Published: 00:02 GMT, 27 December 2013 | Updated: 14:13 GMT, 27 December 2013 Experts say 'exciting' research on a drug to combat brain plaques could lead to a generally available pill within five years A new Alzheimer’s drug that could reduce a crucial component of the disease by 90 per cent is to be tested on thousands of patients. 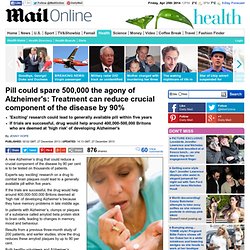 Experts say ‘exciting’ research on a drug to combat brain plaques could lead to a generally available pill within five years. If the trials are successful, the drug would help around 400,000-500,000 Britons deemed at ‘high risk’ of developing Alzheimer’s because they have memory problems in late middle age. ‘If the trials prove it works, it will have to go through licensing procedures, so it will probably take about five years to become available. One drug to rule them all: New medication could treat wide range of diseases.

Many diseases are caused by proteins that did not fold correctly after translation or have undergone genetic mutation that prevents them from being folded correctly. 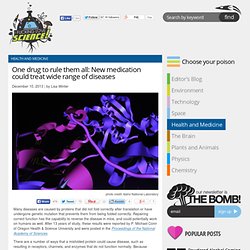 Repairing correct function has the capability to reverse the disease in mice, and could potentially work on humans as well. After 13 years of study, these results were reported by P. Michael Conn of Oregon Health & Science University and were posted in the Proceedings of the National Academy of Sciences. There are a number of ways that a misfolded protein could cause disease, such as resulting in receptors, channels, and enzymes that do not function normally.

Because cellular functions are not optimal, disease occurs and the entire organism is affected. This study focused on male mice who were unable to sire offspring, due to an induced mutation in the gonadotropin-releasing hormone receptor (GnRHR), which starts the signal for puberty and fertility. Alzheimer's Summit: Some Rare Good News. It's been a tough couple of months for American healthcare. 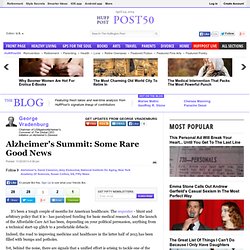 The sequester - blunt and arbitrary policy that it is - has paralyzed funding for basic medical research. And the launch of the Affordable Care Act has been, depending on your political persuasion, anything from a technical start-up glitch to a predictable debacle. Indeed, the road to improving medicine and healthcare in the latter half of 2013 has been filled with bumps and potholes. Yet, behind the noise, there are signals that a unified effort is arising to tackle one of the most feared and vexing diseases confronting America and the rest of the globe.

Alzheimer's insight from DNA study. 27 October 2013Last updated at 18:03 GMT By James Gallagher Health and science reporter, BBC News The exact causes of Alzheimer's are unknown A clearer picture of what causes Alzheimer's disease is emerging after the largest ever analysis of patients' DNA. 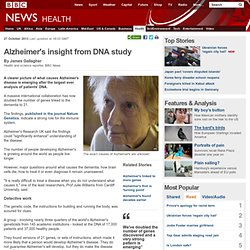 A massive international collaboration has now doubled the number of genes linked to the dementia to 21. The findings, published in the journal Nature Genetics, indicate a strong role for the immune system. 2013. Dementia: Can Alzheimer's disease be delayed by a chemical found in PINE CONES? Compound found to prevent formation of plaques that stop brain cells from working effectively in Alzheimer's patients By Claire Bates Published: 09:29 GMT, 2 August 2012 | Updated: 10:21 GMT, 2 August 2012 A once-a-day tablet that harnesses a chemical found in pine cones shows great promise in both preventing and slowing the progress of Alzheimer's disease. 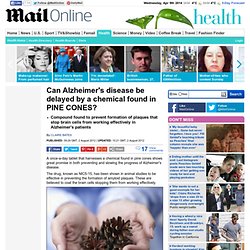 The drug, known as NIC5-15, has been shown in animal studies to be effective in preventing the formation of amyloid plaques. These are believed to coat the brain cells stopping them from working effectively. An Outcast Among Peers Gains Traction on Alzheimer's Cure. Psoriasis drug 'slows dementia' mice study suggests. 25 November 2012Last updated at 18:05 ET Psoriasis is a skin condition when new skin is produced too rapidly - forming red marks Drugs used to calm inflammation in psoriasis may also help to combat the effects of Alzheimer's disease, a study on mice suggests. 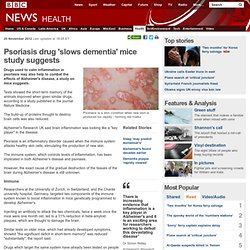 Tests showed the short-term memory of the animals improved when given similar drugs, according to a study published in the journal Nature Medicine. The build-up of proteins thought to destroy brain cells was also reduced. Alzheimer's Research UK said brain inflammation was looking like a "key player" in the disease. Psoriasis is an inflammatory disorder caused when the immune system attacks healthy skin cells, stimulating the production of new skin. The immune system, which controls levels of inflammation, has been implicated in both Alzheimer's disease and psoriasis. However, the exact cause of the gradual destruction of the tissues of the brain during Alzheimer's disease is still unknown.